Being a father to his children.

Protect and be a good father to his daughters.

Taiyang Xiao Long is a supporting protagonist in RWBY. He is the father of Yang Xiao Long and Ruby Rose. He is mentioned to be a teacher at Signal Academy on the island of Patch where the girls were raised and grew up.

He is voiced by Burnie Burns.

Years before the start of RWBY, Taiyang was part of Team STRQ, along with Summer Rose, Raven Branwen, and Qrow Branwen. Over time, Taiyang began a relationship with Raven, who would later become Yang Xiao Long's mother. Not long after Yang's birth, Raven disappeared. Some time later, Taiyang began a relationship with Summer, who would later become Ruby Rose's mother.

Taiyang lived with his family on the island of Patch, off the coast of Vale, and worked at Signal Academy while Summer went on missions as a professional Huntress. However, when Summer failed to return from a mission one day and was believed by most to be dead, Taiyang was left heartbroken once again, though he continued to care for his two daughters.

Taiyang was briefly mentioned by Ruby during "The First Step", who scoffed at Yang's suggestion of making friends with a simple "Ugh, you sound just like Dad".

During the second semester of Team RWBY's classes, Taiyang sends the family dog Zwei to Beacon Academy through the mail, along with a letter, for Zwei's well being, as Taiyang has to leave Patch for a few days.

Taiyang is seen briefly at Summer's Gravestone with Ruby and Zwei as Ruby goes to visit Summer's grave. Ruby mentions that he intends to go on a mission soon and that he misses adventuring with Summer and his old team.

After the Fall of Beacon

In the aftermath of the Grimm invasion of Vale, Taiyang takes care of Ruby and an injured Yang. When Ruby wakes up, he is overjoyed and grateful to have both of his daughters safe and back at home. However, his reunion is interrupted by Qrow, who asks to speak to Ruby alone. Reluctantly, Taiyang obliges and leaves the room.

Some time later, as winter sets in, Taiyang is seen bringing some breakfast to Ruby in her room, but is dismayed to find that she has departed for Haven in order to lead her own investigation, leaving only a note upon her bed.

In the following summer, Taiyang brings Yang a new mechanical arm that was commissioned by General Ironwood. However, Yang refuses to put it on, leaving him disheartened. When he later watches Yang have a trauma flashback in the kitchen, he is visibly concerned for her well-being.

One night, Taiyang invites Doctor Oobleck and Professor Port over from Beacon, talking and laughing about the time when Qrow wore a skirt at school many years ago. They are later joined by Yang, who admits that she is afraid to don her new arm, and is instead trying to accept her current condition as normal. Taiyang tells his daughter that she does not need to let it stop her. Later, as Oobleck and Port leave, Taiyang tells them that he cannot search for Ruby because he has some "things" to look after, looking back at Yang's bedroom window.

The next morning, Taiyang is watering sunflowers when his daughter emerges from the house, wearing her new arm. Smiling, he stands up and says they will "get started". They train for weeks before Taiyang brings up Yang's dependence on her Semblance to see her through fights. He explains to her how relying on it is a handicap and suggests she try seeing her way around a problem rather than through it. In the process, he opens up about Raven.

When Yang shows signs of leaving, Taiyang states that he does not plan to stop her but wants to know what her plans are. Taiyang asks his daughter if she will go searching for Raven or Ruby.

After Yang leaves, Taiyang stays home, reflecting about his former team and his daughters' disbanded team.

It is later revealed that he told Yang how Raven's semblance works.

Taiyang is a man with blond hair that has two small strands sticking out from the top and blue eyes which look lilac in the old Team STRQ photo. His facial hair consists of a soul patch and a small stubble along his jawline. On his right arm is a tattoo similar to a heart. His hair was once a bright shade of gold, but in his older age it has notably grayed somewhat, still blond, but just far more subdued.

He wears brown cargo shorts with a dark brown belt, black shoes, a red bandana on his left arm, and a brown leather vest over a tan dress shirt with the right sleeve cut off. For armor, he wears a metal spaulder, leather vambrace, and a brown fingerless glove, all on his right arm.

In his younger days, he did not have his facial hair or his tattoo, he wore an orange bandana around his left arm rather than a red one and wore brown cargo pants rather than shorts.

Taiyang is said to be a bit overprotective by both of his daughters, yet still open and caring. His attitude towards helping others in need was passed along to his children too. He appears to have an eccentric side, as he is stated to do things like sending the family pet Zwei through the mail all the time.

During his period of mourning the disappearance and possible passing of Summer Rose, Yang said he "shut down", showing that he valued her presence greatly and was devastated by her loss. His over-protectiveness of his daughters likely stems from both this and the incident where they were almost slaughtered by Beowolves, had their uncle Qrow Branwen not been around to save them.

Given his eccentric side, the fact that he decided to train Yang as Ruby said in "Round One" and that he let both of his daughters become Huntresses, it is likely he managed to move on from his emotional breakdown to become a better father.

In "Family", he is shown to be very sociable, as he is seen talking and having laughs with Peter Port and Bartholomew Oobleck at his house. Taiyang can also be blunt, albeit in a good-natured way, toward his daughter. This trait is shown further in "Two Steps Forward, Two Steps Back", when he discusses the flaws in Yang's fighting style during a sparring session and suggests an alternative approach.

Taiyang is a fully-trained Huntsman and went on dangerous missions with his team. He now teaches at a combat school, Signal Academy, and takes on missions from time to time. It was stated by Ruby in "Round One" that he taught Yang how to fight. In "Two Steps Forward, Two Steps Back", he is shown sparring with his older daughter in hand-to-hand combat.

His strength is shown when he knocks Yang back in the same episode with a single punch, despite her blocking the attack. He is also very durable, able to take a blow from Yang's robotic fist and still remain standing, despite skidding back several feet in the process. 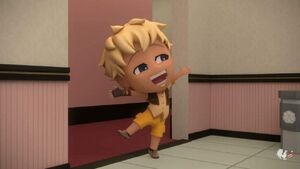