Hanging out with Jaller.

The Chosen One
Warrior
Elemental

Takanuva, originally a Matoran named Takua, is the Toa of Light and one of the main protagonists in the Bionicle universe, especially in the 2003 Mask of Light storyline.

He was voiced, in both of his forms, by Jason Michas in the Bionicle: Mask of Light movie.

Takanuva was once an adventurous, but somewhat irresponsible Matoran named Takua who found the Mask of Light with his best friend Jaller. PTakua and Jaller eventually showed the mask to the Turaga elders, and they sent them on a quest to find the seventh Toa, to whom the mask belonged to. Eventually, after a Rahkshi attack, Takua realized he was the Toa of Light and put on the mask and turned into Takanuva, the Toa destined to fight off Makuta Teridax's evil.

As Takua, he had sporadic minor appearances until he became Takanuva in the second half of the 2003 storyline. From there, he had a minor role in the 2006-2008 Bionicle Legends saga and a major supporting role in the 2010 Bara Magna saga. In the movies, he is the main protagonist of Bionicle: Mask of Light and appears briefly in the finales of Bionicle 2: Legends of Metru Nui (as Takua) and Bionicle 3: Web of Shadows (as Takanuva). He does not appear in the fourth movie, Bionicle: The Legend Reborn. 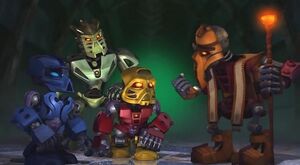 Retrieved from "https://hero.fandom.com/wiki/Takanuva?oldid=1970424"
Community content is available under CC-BY-SA unless otherwise noted.