Highschool of the Dead

Survivors
Takashi's Group is a group lead by Takashi Komuro who banded together to survive the undead.

The group was formed when Takashi and Rei, Shizuka and Saeko, meet up and saved Hirano and Saya from a group of them. They barricaded themselves in the faculty room and chose to team up to escape from the school. 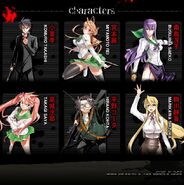 Add a photo to this gallery
Retrieved from "https://hero.fandom.com/wiki/Takashi%27s_Group?oldid=2151080"
Community content is available under CC-BY-SA unless otherwise noted.