Takechiyo is one of the main characters of Yashahime: Princess Half-Demon.

He is voiced by Ai Fairouz in the Japanese version, and by Ryan Bartley in the English version.

He is a tanuki (raccoon yokai) child with to ears length brown hair and blue eyes.

After Moroha sells skull head of Tokotsu to Jyubei, Jyubei call him to tell him not to let Moroha escape in order to follow her and make sure that she slays Tokotsu.

He carries Moroha in his bigger Tanuki form to take her here. He tells her not to run away and will watching her and fly away.

After defeat of Tokotsu & Jakotsumaru while watching Moroha and half-demons; Towa & Setsuna at the sky, he inform to Jyubei that they demolished everything including the Red Bone Palace without single trace. 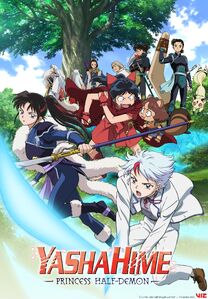 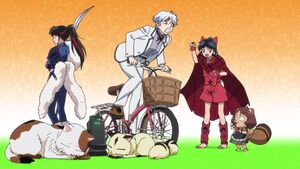 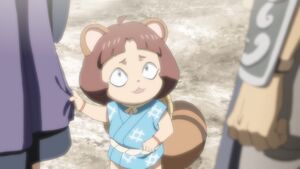