Heroes Wiki
Register
Don't have an account?
Sign In
Advertisement
in: The King of Fighters Heroes, Male, Fighters,
and 32 more

Takuma Sakazaki is a hero from both the Art of Fighting and The King of Fighters fighting game series. His distinguishing feature is an X-shaped scar on his right pectoral. He is also somewhat eccentric, donning his tengu mask and insisting he's Mr. Karate, and delivering speeches that are supposed to rally morale, but often make him look silly. Takuma is the most established known Kyokugenryu Karate practitioner, and he is the only one in the discipline who can make full use of the discipline's most difficult moves.

During his younger days, he became rivals with Ryuhaku Todoh and Lee Gakusuo, Lee Pai Long's father. He once fought in a match with Gakusuo, but they could not decide on a final victor and it ended in a draw. In honor of one another's strength, Gakusuo was dubbed "The Ultimate Tiger" and Takuma was known as "The Invincible Dragon". He was also acquaintances with Jeff Bogard, and seems to have a yet-to-be-divulged history with Saisyu Kusanagi and Gang-il. His experiences with his various opponents lead Takuma to eventually invent Kyokugenryu Karate.

As time passed, Takuma married an American woman named Ronnet. Both Takuma and Ronnet became parents of Ryo and Yuri, who were born respectively four years apart. Shortly after Yuri's birth, they moved near Southtown to raise their family and to spread the prestige of the Sakazaki martial arts.

Takuma trained Ryo exclusively at the beginning, as he felt Yuri was too young and he wanted Ryo to be his proper heir as Kyokugenryu Master. He accepted Robert Garcia into the dojo after seeing his earnest interest in the style. When Ryo was 10, Ronnet was killed in a car accident. Sensing that he and she were most likely targeted by someone, Takuma leaves his home to investigate the manner and leaves Ryo to take care of Yuri.

Takuma eventually fought his way through lackeys and stooges to confront the man responsible for crime in the area, Geese Howard. He demanded that he put an end to the tyranny and Geese replied with threats against Takuma's children. To protect the safety of his remaining family, he was forced to work for Geese. In order to preserve his honor, Takuma donned a tengu mask and formed another persona: "Mr. Karate". During his years of labor, he became feared as the indomitable and undefeated hitman for Geese.

While Geese was out on business, Mr. Big was in charge. In order to keep Takuma firmly under his control, Mr. Big had Yuri kidnapped. Unfortunately, that move caused Ryo and Robert to tear up Southtown in search of her and Takuma. When Mr. Big was defeated, he called for Mr. Karate to deal with the two youths. He fought with Ryo and, after a fierce battle, Ryo became the victor. Not knowing Mr. Karate's true identity, Ryo threatened to kill him if he didn't tell him where Takuma and Yuri were. Yuri stopped Ryo from killing their father, and they had a joyous reunion.

To redeem himself as a master of Kyokugenryu Karate, he decides to enter the King of Fighters tournament without his Mr. Karate persona. In his ending for the second Art of Fighting, Takuma's injuries from fighting takes its toll and he hands responsibility of the dojo to his children. He implies that he'll probably have to retire from the fighting circuit for awhile.

Takuma led Ryo and Robert as a team in the new King of Fighters for two years, until he retired and brought in Yuri as a replacement. He remained on the sideline until 1999, when he rejoined the team as their fourth man. In 2000, Takuma welcomed King into the team, knowing that she and Ryo have a "special something" together. He couldn't use the Garcia fortune to rebuild with, as a world financial crisis had virtually wiped it out. He entered the team into the 2001 tournament to win the prize money. At the end of King of Fighters 2003, he is apparently attacked by an unseen assailant. He tries to tell what happened to him, but passes out before he can. It was rumored that his assailant may either be Yamazaki or Eiji Kisaragi, however, according to the official KOF XI story, it is stated that Takuma collapsed due to malnutrition, liver problems, and other health issues. He uses his "weak state" as an excuse to once again enforce his wishes for a grandchild, requesting that King enter the tournament in his stead. He makes a healthy recovery to enter KOF XIII with Robert and Ryo.

Takuma is rather serious when he's relating to evil people. But when relating to his students, Takuma starts saying things that many people find silly. He is a traditionalist and a fighter to the core, making it sometimes impossible for him to relate with the modern day youth. His inability to change his strict training regime unintentionally drives newer students away from the dojo. He constantly makes wheat noodles to the point where it's almost sickening for his students.

Much of his sillier antics tends to spread to his family, being seen as a bit of a bumbling dad; he desperately wants his son to wed and grant them the "third successor" of the family. When Yuri cuts her hair, Takuma doesn't approve of it since it pains him to have no memories of her with a short haircut. He is also a bit overprotective of Yuri in a comical way, seeing how he and Robert fight each other behind their teammates' backs due to Robert proposing a marriage to Yuri.

Despite this, outside of his serious Mr. Karate persona in SVC Chaos and KOF XIII, Takuma himself is serious in regards to both friend and foe alike, and offers fine words of wisdom to those like K' and Saiki (though the latter dismisses his point). 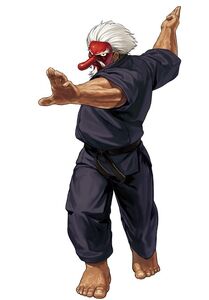