Barbie: Mariposa and the Fairy Princess

Fairy
Talayla is a character in the 2013 animated film, Barbie: Mariposa and the Fairy Princess. She is a crystal fairy who lives in Shimmervale, a crystal-powered kingdom in Fairytopia ruled by King Regellius.

She is first introduced hiding behind the flowers when Mariposa arrived at Shimmervale. Mariposa finds her and she yells to Mariposa not to hurt her or hypnotize her so she can be kidnapped to a dark cave. Mariposa informed her she will not and she became relaxed and happy. She introduced herself as Talayla.

She compliments Mariposa's butterfly wings and how cute Zee is. Talayla informs her that the marching band didn't come as they were afraid to meet her and apologizes for it. Mariposa said it was okay and Talayla began showing her around Shimmervale.

Talayla is about to explain the main source of power of Shimmervale's houses, but Mariposa already does it by reading her book aloud. She reminds Mariposa that it is her line and continues speaking. Mariposa almost explains about the Glow Water Falls, but Talayla managed to cut in. While explaining about the history of the castle, Talayla does not realize she lost Mariposa on her tour guide. When she found her, she is glad to see Mariposa still there and began showing Mariposa's room.

Talayla said that she decorated Mariposa's room according to all the information Crystal Fairies know about Butterfly Fairies. She asked Mariposa if the trees in Flutterfield really do come alive and devour Butterfly Fairies. Mariposa, shocked, replies no and asked if the trees in her room does that. Talayla said no, because she couldn't figure it out how to make it work. Then she invited Mariposa to meet the King and Princess Catania.

Talayla is serving teas to the King, but she is having a hard time giving one to Mariposa, because Mariposa's wings get in the way. Talayla asked her if she could move to pour more tea and Mariposa did so. But she accidentally hit the King's tea cup and accidentally makes Talayla drop the teapot, which hits Zee. Talayla offers Mariposa a cake when the tea time is over and said "it is better than expected" even though the tea time is actually ruined.

The next morning, Talayla goes to Mariposa's room to awaken her. She sees the creepy objects and screams, which startled Mariposa and Zee. She then invites Mariposa to meet the residents of Shimmervelle to began a speech. Talayla then leads her and the royal family to meet the residence but when they arrived no one is there.

The next day, Talayla came in and give Mariposa her ball gown/dress. Talayla explained that the Crystal Ball is an annual event and the biggest. Talayla is seen to remind Mariposa about the Crystal Ball. When she entered she sees Mariposa already changed her clothes but shock Mariposa is not shimmer yet and whistle small fairies to shimmerize Mariposa. Talayla then sees Mariposa flip down her wings and sees it closely only to get hit when it flap out.

Talayla showed Mariposa's the sight of Crystal Ball. Mariposa amazed. Talayla then fly to enjoy the ball with Zee but then Zee remembers that Mariposa can't fly and Talayla confused how can Mariposa enjoy the ball. Catania arrived on time and offer Mariposa to rides in her carriage. Afterwards, Talayla fly away to enjoy the ball.

Talayla is in the ballroom where Gwyllion freeze her. After Mariposa defeat Gwyllion with Catania, Talayla is free just like the other hostages and she is shown to be in Flutterfield proposed by Mariposa. Talayla sees how Mariposa and Catania folded down their wings. Catania said she never seen his father face that red(angry) but Talayla said she did when she accidentally put lava sauce in the King's muffin. Everyone started to become disgusted and everyone laughs, and Talayla said "she will never live that down".

Talayla then leaves Mariposa alone with Prince Carlos. At the end, Talayla gathers around with Willa and Catania. Lord Gastrous came around and said that his theory about crystal fairies is not vile is true to which Talayla thanks him and pulled a prank by scaring Lord Gastrous. Talayla, Willa, Catania, and Lord Gastrous dance together.

Talayla is a perky and helpful girl. She is shown to be cowardly and somewhat ignorant, coming off as possibly racist, but she has trouble learning the correct information sometimes.

Talayla is a crystal fairy with light skin, long pink hair in a ponytail and brown eyes. Her wings are pink, blue and white and have blue crystals in them, and they are shaped like butterfly wings. Talayla's makeup consists of blue and pink eye shadow and purple lipstick. She wears a dress that has a blue and pink bodice with crystals on it, and the skirt is full, short and pink. Her shoes are pink with crystals on them, and they wrap around her legs up to her knees. 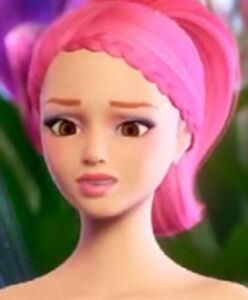 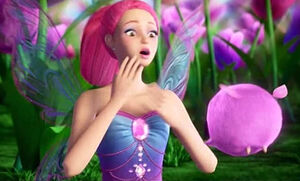 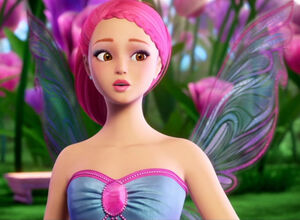 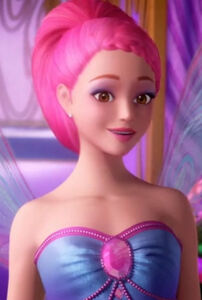 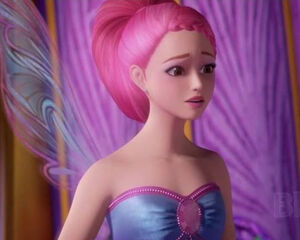 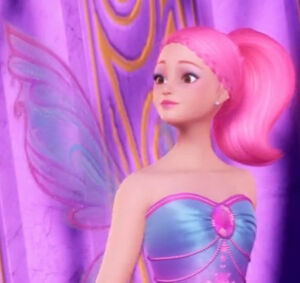 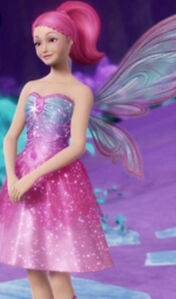 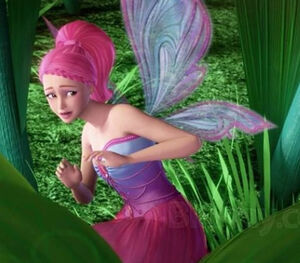 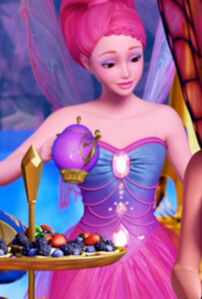 Retrieved from "https://hero.fandom.com/wiki/Talayla?oldid=1780725"
Community content is available under CC-BY-SA unless otherwise noted.