"You need a sidekick?"

Talia is the heroine of the animated comedy Justin and the Knights of Valour.

She is also the best friend and love interest of Justin, she is also a friend of Melquiades.

Talia is a feisty and courageous young girl who not only our clumsy hero Justin's passions for knighthood but also his final adventure. Like her new friend, she is trapped in a life that doesn't make her happy as she spends her days waiting tables at the ramshackle Broken Eagle Inn. Outgoing, strong-willed, caring, brave and witty, Talia and Justin share an instant connection and after he rescues her from her terrible job, their friendship blossoms into love. 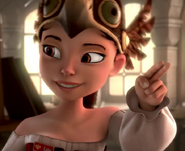 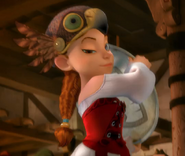 Talia makes her move
Add a photo to this gallery
Retrieved from "https://hero.fandom.com/wiki/Talia?oldid=1712329"
Community content is available under CC-BY-SA unless otherwise noted.