The Last Priestess of the Winds

To complete her training as a wind priestess (suceeded)

Talim is a heroine in the Soulcalibur series of fighting games, making her first appearance in the series' third installment, Soulcalibur II. She has since returned in every game since, with the exception of Soulcalibur V.

Talim is nicknamed The Last Priestess of the Winds, and true to that nickname, has the power to sway the wind and relies on earth's nature to guide her in her adventures, and most importantly in battle.

She fights with dual Elbow Blades, and as said earlier, uses her advantage of wind control to give her an unpredictable edge during combat — being able to hop around and over the opponent at any moment. This unique tactic, and Talim's soft and innocent personality, have lead to her becoming a major fan favorite, thus receiving much praise from the Soul Calibur community.

What lies in her soul is Purity.

Being a young girl, Talim is kind and innocent. Her demeanor is notably more benevolent compared to most of the characters in the series.

In battle, she is shown to be quite merciful to her opponents (including her enemies), as her comments suggest self-doubt and worry for their safety.

She is shown on multiple occassions to be able to speak with the wind, often times asking for advice from it, and thanking it.

Sometime during the events of Soulcalibur, Talim's village was ravaged by Spanish and Portugese settlers that Talim was destined to be the last priestess of her tribe. When the Evil Seed wrecked havoc across much of the world, Talim was the one member of her tribe that was the most affected by it, causing her to become unconscious for several days before finally waking up.

Talim, now 15 years old, is a wind priestess in training. One day, a mysterious traveler appears in her tribe's village carrying a strage metal fragment, claiming that the fragment is "vitality charm". Talim, however feels an evil, yet familiar force within the fragment, and discovers that it is the same evil energy that affected her so many years before. Afterwards she vowed to return the shard to where it orginated, and despite her elder's protests, she went on a journey to return the shard as well as other fragments to their point of origin before others suffer from the death and destruction caused by the same evil force many years earlier.

Talim would travel to wherever the Wind led her, and felt that as long as she felt its presence, she would be safe.

Talim has now collected several of the fragments scattered across the world, but has also learned the true identity of the shards, they are in fact the fragments of the Cursed Sword: Soul Edge. Eventually, the Wind led her to the core of the corrupted life-force located within a watermill. There, she found a young boy who was infected by the manipulation of the evil sword. Feeling sorry for the boy, Talim decided to stay at the mill and nurse the boy to full health.

Time passes, and after growing accustomed to what the mill had to offer, a young man by the name of Yun-Seong arrived at the mill, seeking answers to the whereabouts of Soul Edge. Talim warned him that the sword was evil, but Yun-Seong shrugged off the warning. Yun-Seong however agrees to stay to more-or-less help the sick boy, but more importantly find clues to where Soul Edge really is.

Overtime, Talim's attitude towards Yun-Seong began to improve, seeing that despite posessing an upbeat attitude, he was not evil. However, the sick boy's condition began to worsen, to the point that he was about to succumb to the Evil Sword's power. Talim came to the belief that the only way to effective cure the boy was to absorb the evil influence and then transferred out of her body to be carried away by the wind. This process however backfires and much of the corrupting influence of Soul Edge stays within her body causing her to slowly lose communication with the Wind, causing her to fall into misery, seemingly beginning to lose the special ability she had been blessed with for so long. Yun-Seong sees her struggle, and tries to comfort her by stating "There are some things you can't do anything about. When that happens, you just have to do what you can!" Talim intially brushes this off as a meaningless rant, but soon comes to the belief that what Yun-Seong said was meant to build her confidence.

Eventually, the ritual was proving fruitless, and Talim came to the belief that the only alternative to save the boy's life would be to exercise all of the evil energy out of him in one go. The boy however refused, believeing that the prosess would would do more harm than good, and could potentially spread to the rest of the mill's residents if it failed. Yun-Seong however, steps in with a different ritual, and when this is iven a try, it proves successful, curing the boy and ridding the evil influence of Soul Edge from the mill. Talim is relieved of this, and after staying a few more days to make sure the the corrupting force has finally been lifted, she and Yun-Seong parted ways and left the mill on their own personal quests.

During her peroid trying to cure the young boy in the previous game, Talim had witnessed visions of a blue, spirit sword, that could bring about the end of the cursed sword permanently. Initally Talim thought little about it, seeing that trying to aide the boy was more important at the time, but after leaving the mill, she began having the visions again in her sleep, she came to the conclusion that whatever this blue sword was, it must be very important.

Talim eventually met up with Yun-Seong once more, and the two decided to become traveling companions. During this time, Talim continued to lecture Yun-Seong about the dangers Soul Edge posed towards humanity, but Yun-Seong was not persuaded otherwise. They soon encountered one of Yun-Seong's kin, a girl named Seong Mi-Na, who too shares Talim's beliefs on Soul Edge, and tried convincing Yun-Seong to change his mind, but to no avail.

One night while the girls fall asleep, Yun-Seong flees on his quest to find the cursed sword. Seong Mi-Na becomes paranoid as to where Yun-Seong disappeared of to, but Talim assures her that he will make the right descision sooner or later. The two then parted ways shortly afterwards.

On another night, while she was now alone, Talim gazed up at the stars in curiousity.  While at first intigue by the soothing sight, she soon came to realize that Soul Edge was growing more powerful, and that she didn't have much time. While asleep, she had another vision with the strange blue sword. During the dream, she realized that the blue sword, while seemingly pure at first glance, was also growing more powerful, and was willingful to eliminate any influence corrupted by the cursed sword entirely, whether good or evil. Upon awakening, Talim hurried to find the source of the spirit sword: the Hero King Algol.

Talim battles the hero king, and successfully incapitates him in combat, causing the two swords to fall in front of him. Talim does not blame Algol for the chaos that has ensued overtime, as well as does not question what exactly the swords are; however she does know that both swords threaten the fabic of nature and peace on Earth, and that the only way to stop is to revert them to their orignial forms.

Talim then sees Algol's troubled look, seeing that there is something wrong with him. She then uses the power of the swords (as well as the Wind) to resurrect his long-dead son Arcturus. Algol is implied to be overjoyed and the two join hands and leave amidst a bright, glowing light. Once the light completely obscures Algol and his son, Talim's voice can be overheard saying "Oh wind, I beg of you, bring peace and tranquility to all."

The epilogue then states, "The world will now return to its natural form and the cries of the winds have disappeared."

In an alternate timeline, Talim is once again the "The Last Priestess of the Winds", she is raised amongst the village elders to help her communicate with the wind. Up until she was 15, she spent her entire life on the island until a mysterious stranger approached the village with a strange fragment. Talim sensed that the fragment was in fact part of the evil sword Soul Edge, and vowed that it must be returned from where it came. She then set out on a journey towards the mainland to find the remaining shards, and unfortunately leaving her family behind in the process. 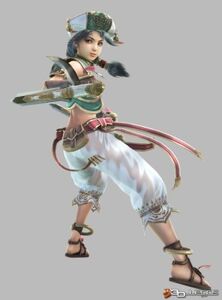 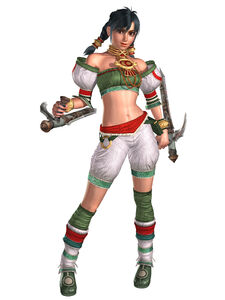 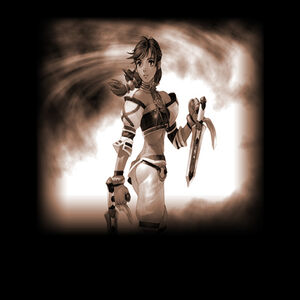 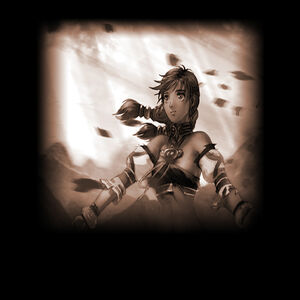 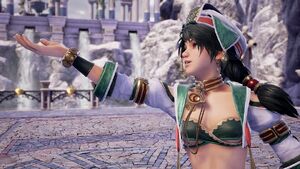 Retrieved from "https://hero.fandom.com/wiki/Talim?oldid=1857782"
Community content is available under CC-BY-SA unless otherwise noted.