Talion gets his revenge against the ones who killed his family, and decides to continue to fight against Sauron by forging a new ring. Despite being betrayed by Celebrimbor, Talion managed to survive by collecting a Nazgul ring, and decided to fight Sauron's forces as long as he could before he succumbed to the ring. Talion succumbed to the ring, but was freed from his curse when the One Ring was destroyed, and he was able to pass on to the afterlife.

He is voiced by Troy Baker, who voices Joel in The Last of Us series and Erron Black in the Mortal Kombat series, and also voiced Booker DeWitt in Bioshock: Infinite, Jack Mitchell in Call of Duty: Advanced Warfare, Delsin Rowe in Infamous: Second Son, Orkos in God of War: Ascension, Red Hood in Batman: Arkham Knight, Sam Drake in Uncharted 4: A Thief's End and Uncharted: The Lost Legacy, and many others.

Talion was a Ranger of Gondor stationed at the Black Gate, the gateway into the lands of Mordor. Talion lived at the outpost with his wife and son, as they had to move to the Black Gate after Talion killed a Gondorian that was assaulting Loreth. Talion's father-in-law, Hallas, wanted to kill him, but Loreth convinced him that he was saving her, and they moved to the Black Gate, but they wanted to return home.

At the start of the game, the outpost is attacked by servants of Sauron. Talion's family is slain by one such servant, known as the Black Hand with the aid of The Tower and The Hammer. Talion expects to soon meet his family in the afterlife, and recalls the events before his and his family's death. Instead, however, Talion is resurrected and joined with a Wraith known as Celebrimbor (however he is unaware of his identity), presenting him with a unique for revenge on those who have wronged him. Celebrimbor is an individual with personal motives, but Talion chooses still to cooperate with him on his journey.

During their journey, Talion helps Celebrimbor regain his lost memories, and learns that he was the greatest Elven smith that created the rings of power. The two also work with the Outcast to destroy a statue of Sauron, help the Tribesmen of Núrn cure Lady Marwen (as it's revealed Saruman was possessing her), and aid a dwarf named Torvin kill a legendary Graug that killed his brother. Additionally, Talion and Celebrimbor began to grow an army of Orcs, using the Elf's wraith abilities to dominate the Orcs of Mordor to stand against Sauron and The Black Captains.

Talion and Celebrimbor succeeded in killing The Black Captains, but he learns from the Tower of Sauron that he is the Elf's vessel. Despite Celebrimbor telling him they can enter the afterlife, Talion decides to help the Wraith defeat Sauron.

Talion and Celebrimbor decide to forge a New Ring to defeat Sauron, but after completing its creation, the wraith is captured by Shelob. Talion manages to not bleed out by wearing the New Ring, and travels afar to Shelob's lair to have her return Celebrimbor to him. She agrees if Talion gives her the ring, and he does so despite Celebrimbor telling him not to. Shelob gives Talion visions of the future, showing Minas Ithil being attacked by an Uruk army, and that the Palantir is there.

Talion and Celebrimbor go to Minas Ithil, and help the Men of Gondor sent the Uruks back by using their own beats against them. Talion argues with the wraith on protecting Minas Ithil from falling, but Celebrimbor wants the Palantir only. Despite helping the Men of Gondor, Minas Ithil eventually falls to the Nazgul when they are betrayed by Idril's father, Castamir. Talion and Celebrimbor continue on with the aid of Eltariel, an assassin sent by Lady Galadriel to hold a stalemate against Sauron's forces and the Nazgul. In addition, Talion grows his army by taking over regions, and placing dominated overlords in charge of his fortresses.

Talion's partnership with Celebrimbor becomes strained when he learns that the Elf Lord aided Sauron in corrupting men who are now the Nazgul, as Celebrimbor forged rings for Sauron to give them. After defeating Isildur, Talion decides to free him from Sauron's control, and is ridiculed by Celebrimbor. Talion realizes that Celebrimbor wants to dominate Sauron and take control of his armies, and refuses to allow the wraith to become a new dark lord. Celebrimbor betrays Talion, deciding to make Eltariel his vessel and gives her the New Ring, as he manipulates her into helping him dominate Sauron.

Talion slowly dies alone, but speaks with Shelob, who reveals that when they were forging the New Ring, she saw a future where he and Celebrimbor dominated Sauron, and started to take over Middle-earth. Shattered, Talion questions how he can continue his fight against the darkness, and Shelob tells him to take over Minas Morgul, as he can hold off Sauron's forces there. Shelob tells Talion to open his eyes, and he realizes that Isildur's ring is still there, as it fell off his finger when being dominated. Talion decides to wear the ring, and becomes a wraith, returning to Minas Morgul and defeats the Witch King.

Talion looks through the Palantir to see Celebrimbor and Eltariel, and sees them defeat the Dark Lord, but Sauron cuts off Eltariel's finger, and merges with Celebrimbor into the Flaming Eye. As a result, Sauron and Celebrimbor battle for dominance for the Eye, but Sauron no longer has his greatest powers, trapping him.

Talion continued to fight against Sauron and his forces, and proceeded to protect the forts he gained during the Shadow Wars. Talion slowly began to succumb to Isildur's ring, and reunites with Eltariel, who was ordered by Lady Galadriel to return to Minas Morgul and to kill him. Talion tells Eltariel that he hasn't fallen yet, and asks for her help in being the counterbalance against Sauron's forces.

Eventually, Talion succumbs to the ring, but is defeated by Eltariel, who learns of his past that led him to become a vessel for the ring maker. Talion is seen being greeted by the Witch King and the other Ringwraiths, and becomes a member as Eltariel decided to stay to fight off Sauron's forces to honor Talion.

By the end of Return of the King, Talion witnessed the death of Sauron, and was killed while riding a drake near Mount Doom. Talion awakes in the afterlife, being free of his curse and is no longer banished from death, and is last seen walking forward as he has found freedom and peace in death. 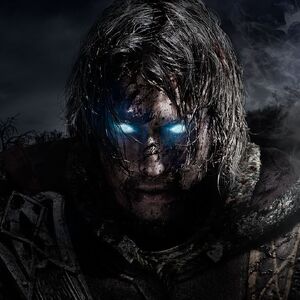 Talion in Middle-earth: Shadow of Mordor. 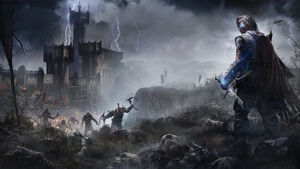 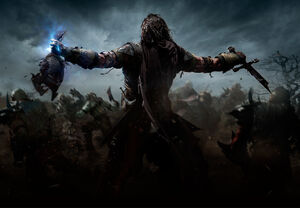 Wallpaper of Talion on the battlefield. 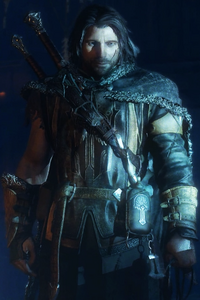 Talion's in game model for Shadow of Mordor. 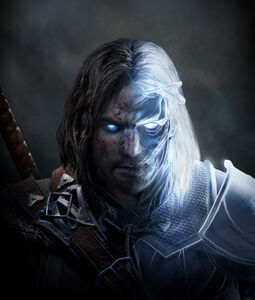 Talion in Middle-earth: Shadow of War. 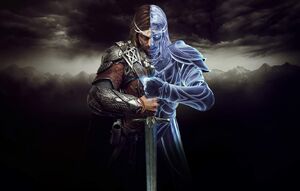 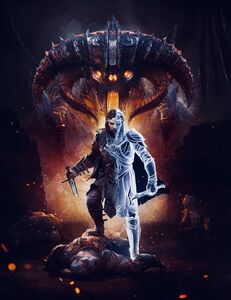 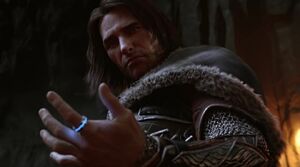 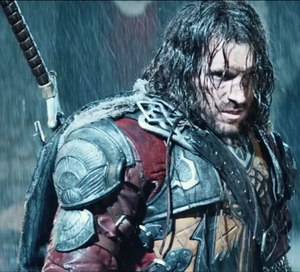 Talion in the live-action trailer for Shadow of War. 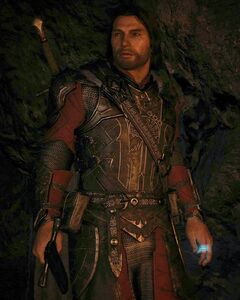 Talion's in game model for Shadow of War. 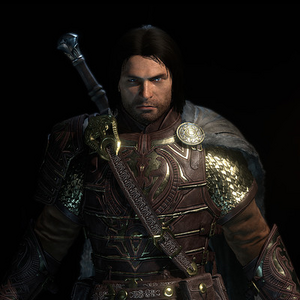 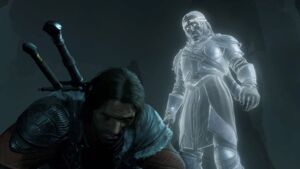 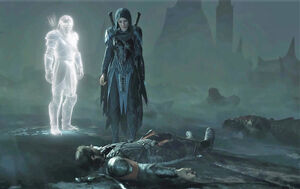 Talion looks upon Celebrimbor and Eltariel, slowly dying as they betray him. 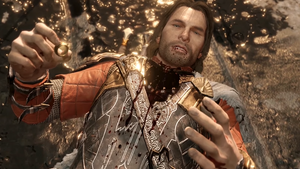 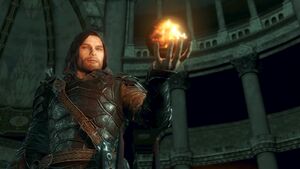 Talion looking through the Palantir, seeing Celebrimbor and Eltariel fight Sauron and the Dark Lord and the Bright Lord merging into the great-eye. 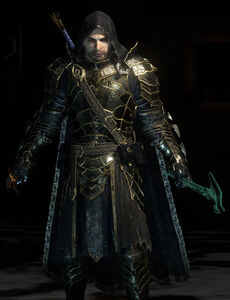 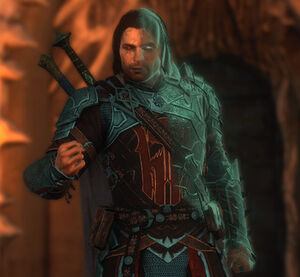 Talion as a Ringrwraith, speaking to his army. 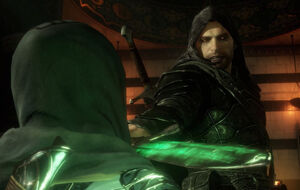 Talion spares Eltariel, proving that he isn't corrupted yet. 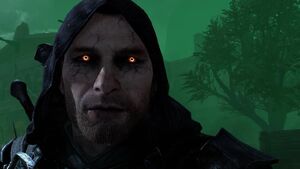 Talion succumbs to the ring, telling Eltariel that Isildur's ring is his. 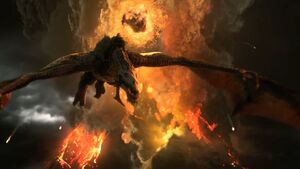 Talion flying a fellbeast during the defeat of Sauron, moments before a volcano rock kills him. 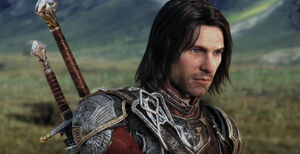 Talion free from the corruption of the ring, moments before going into the afterlife. 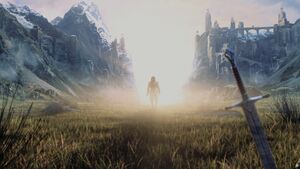 Talion walking into the afterlife.
Add a photo to this gallery

Retrieved from "https://hero.fandom.com/wiki/Talion?oldid=1832921"
Community content is available under CC-BY-SA unless otherwise noted.