My baby (by Akela)
Kitty (by Bree Blackburn)

Playing with his siblings and with Eliza Thornberry

Spending time with his mother, Akela

To reunite with his mother (succeeded)

Tally the Cheetah (simply known as Tally) is a major character in The Wild Thornberrys Movie. He is a young cheetah cub who is a friend of Elizabeth "Eliza" Thornberry, the heroine of the film, and who is kidnapped by Sloan and Bree Blackburn, the villains of the film.

He was voiced by Kimberly Brooks.

Tally is a cheetah cub who lives with his mother, Akela, and his two siblings. He is also a friend of Eliza Thornberry. While he, Daniel & John and Eliza go racing near a tree on the Savannah, Tally is kidnapped by an unseen poacher, and both Eliza and Akela rush to save him, but fail.

He is then found by Eliza in Sloan and Bree Blackburn's camp, and as soon as Eliza frees him, he jumps into her arm as they reunites. But then he tells Eliza that they need to get out, and shortly after, Sloan and Bree arrive, revealing themselves as the poachers who kidnapped Tally back then in the Savannah. The Blackburns capture Tally while also capturing Eliza as well. However, Tally managed to escape from them and reunite with Eliza once again.

After Sloan and Bree Blackburn were defeated and arrested, Eliza returns Tally back to his mother, Akela. After a joyful reunion between Tally and Akela, Eliza apologizes to Akela that the former should have listened to the latter. Akela then thanks Eliza for saving Tally and bringing him back home safe and sound. Eliza then proceeds to leave the Cheetah family as her sister Debbie calls her, not before bidding them farewell. Tally is then last seen playing with his siblings as Akela watches them while Eliza is dancing with her family, Darwin and a group of baboons. 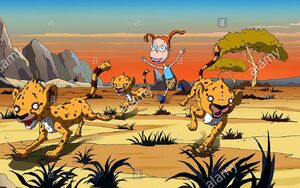 Tally (left) playing with his siblings and Eliza Thornberry

Tally reuniting with his mother, Akela
Add a photo to this gallery

Retrieved from "https://hero.fandom.com/wiki/Tally_the_Cheetah?oldid=1705914"
Community content is available under CC-BY-SA unless otherwise noted.