God of War and Governance

Free the races of men from elven rule (Succeeded)

The Thalmor
Umaril the Unfettered

Talos, also known as Tiber Septim, is the god of governance, war, and the Hero-God of man as well as one of the Nine Divines in the Elder Scrolls series. Despite being the god of war, he is herald rather than criticized since he is known for bringing them to an end and promoting just rule and civil society rather than causing chaos like Ares. His status as one of the Divines is debatable subject of conflict in Tamriel in the recent years.

The Third Era began when he establish the Third Empire in Tamirel under the Septim dynasty. He was known to be among one of few individuals bestowed as Dragonborn by the priest atop High Hrothgar. Upon his death, is was commonly believed that he ascended as a god, and thus was made the Ninth Divine.

In Morrowind, he makes a brief cameo under the avatar "Wulf".

In Oblivion, Talos is instrumental in the expansion Knights of the Nine. In the expansion a long dead elven tyrant, Umaril, resurrects to re-conquer his territory - currently the entire landscape of Imperial Provence. Ghosts of the Knights of the Nine advise the Hero of Kvatch on how they beat Umaril last time, how to recover the nine-holy relics to do the same again. A prophet reveals a way to permanently destroy Umaril. Umaril was made immortal by Meridia - Daedric Prince of souls and light, normally a good entity, but seemed to owe Umaril for his worship of her when he began his crusade against the Divines and their followers. Meridia made Umaril unable to be permanently killed by mortals, Daedra or even the Eight Divines - binding his soul to the mortal world until it could regain it's strength and allow it to manifest a new body to inhabit after a few decades. The prophet points out that though this was done, it was done back when there were only eight divines, and so the existence of Talos as a ninth divine - side-steps Meridia's blessing upon Umaril. By praying to and invoking the power of all Nine Divines, with Talos as the final one, the Hero of Kvatch is able to slay Umaril's body and travel to the spirit world to sever Umaril's soul from the spirit plane, sending him into permant death.

In Skyrim, after a major conflict dubbed The Great War, the Mede Empire signed a peace treaty with the Aldmeri Dominion, which had one controversial section that banned the Worship of Talos throughout Tamriel. In order to enforce the law, the Aldmeri's agents (the Thalmor) tracked down any worshippers and arrested them. Skyrim was most affected by this unfair law, and because of this, many rebelled against the Empire and formed the group known as the Stormcloaks, sparking the Skyrim civil war. If they manage to claim victory, worship of Talos is restored to the province, as well as the province of Skyrim becoming it's own sovereign state.

Talos was a warlord when alive and so he approves of the use of force. Talos was actually somewhat known for his blood-lust, but only towards evil creatures, he held no malice towards any innocents. Though often portrayed as an enemy of elves, Talos in-fact offered clemency to elves he conquered, and his teachings emphasize that while enemies must be slain, one must put aside old hatred to enemies seeking mercy and parlay. Talos re-conquered Summerset, homeland of the elves, many times and put down their uprisings; He finally left them to their own rule once the high-elves finally agreed not to attack the empire of men in Cyrodiil. As his first home on the continent was Skyrim, Talos is spoken of as a the patron of Nords, though Imperials insist he is actually one of the first of the race of Imperials. The general agreement is Talos was a Nord himself, but responsible for distinguishing the Imperial race. As Talos is the first and by most accounts, only man to ascend to divine status, Talos worship considers acknowledgment of the Nine Divines essential to it's religious teachings. Though Talos worshipers acknowledge the existence of alternate god-like figures like the Magna-Ge, the Daedric Princes and Lorkhan, they view the Divines as the highest true gods. Belief in Talos and the Divines justifies the absence of their physical appearances despite their might as part of a compact with the Daedric Princes - that neither will physically manifest on Nirn. Because he used to be a general, established the Imperial Provence and founded the Empire of Cyrodiil, Talos is highly associated with war. 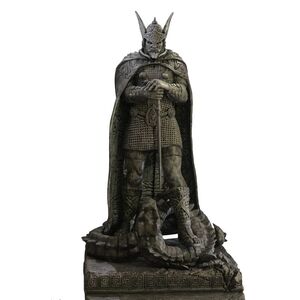 Statue and Shrine dedicated to Talos