Gentle Giant
Tam Tam is one of the heroes from the Samurai Shodown video game series.

Tam Tam is the greatest warrior of his respective village known as the Green Hell and the older brother of Cham Cham. When the village elders' sacred artifact went gone, he gets the responsibility of retrieving their mysterious treasure called the Palenke Stone, which is named after Palenque. However, he takes and brings it back to his village.

Besides, he can protects his village from Shiro Tokiseda Amakusa, the rebellious Christian wanderer, at a second time but fails to stop the thievery of Tangiers Stone, his village's second jewel artifact. So he is penalized for that and turned into a chimpanzee under the pet name Paku Paku. This form helps Cham Cham in his quest to recover the 2 mysterious stones for his village.

Tam Tam describes himself a brave and revered warrior of Green Hell who loves his home and villagers. He walks the path of his father's footsteps and hopes to be proud. However, he is likes to enjoy peace to all and spends time to do anything with his younger sister, Cham Cham. Like other residents of his village, he worships the gods as his saviors to fully know that failure in saving his people, which can cause him to bring out their wrath. When his mask is considered the mask of the gods, he will done it during crisis.

Fire Breathing, which can shoot a fire projectile from Tam Tam's mouth, and Multiple Attack, which can spin his sword or himself for multiple hits, are his only powers as seen in the game. 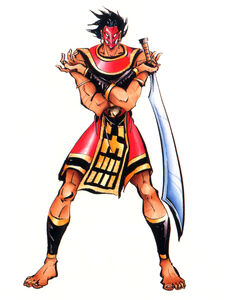 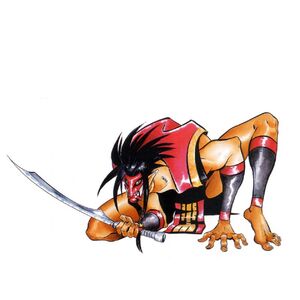 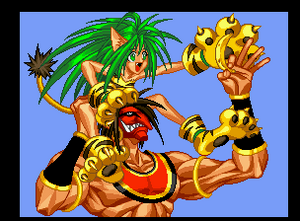 With his sister Cham Cham in Samurai Shodown RPG 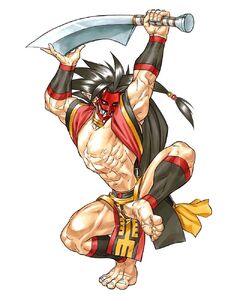 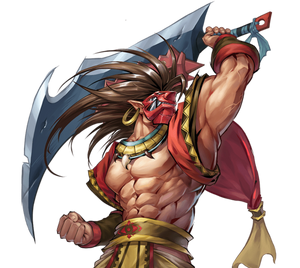 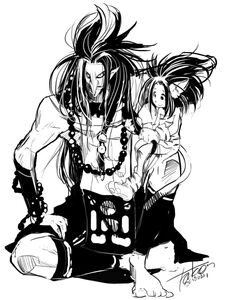 Retrieved from "https://hero.fandom.com/wiki/Tam_Tam?oldid=2140059"
Community content is available under CC-BY-SA unless otherwise noted.