Shooting with a cross

Heroic Monster
Tamagon is the main character of the NES videogame Devil World.

Tamagon looks like a green dinosaur with wings but without legs

Tamagon decided to attack the World of the Devil, his adventure was full of mazes that had some white dots that he had to eat, after eating them, 4 bibles appeared to place them in a square to defeat the devil, but he had to be careful with the Medaman, to eliminate them, Tamagon need to grab a cross to shoot them

In Super Smash Bros. Melee, Tamagon appears as an collectible trophy in the japanese version, he doesn't appears in the others versions.

Tamagon appears as a sticker in Super Smash Bros. Brawl, the sticker give a boost to the resistance on fire attacks by 11 to any fighter.

In Super Smash Bros. Ultimate, Tamagon appears as a novice-ranked primary grab-type spirit. His spirit battle is on the Mario Bros. stage against tiny green Ridley and clear Richter Belmont who favor neutral special. Only Ridley need to be defeated to win. 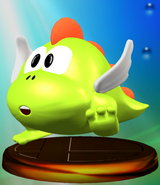