Escape from the Infected, survive the Outbreak

Her Infected father
The Infected
The soldiers (during Code Red)

Teenage Sibling
A kind-hearted and caring teenage girl, Tammy Harris is the protagonist of the horror movie 28 Weeks Later. She is the daughter of Donald and Alice Harris, the sister of Andy Harris, and is a survivor of the Rage virus and its devastation upon London.

She is played by Imogen Poots.

Like Jim, Tammy missed the end of Britain with her brother because they were on a school trip in Spain when the destruction happened. This is where they enter the story. They return to Britain, being the only children in the country, and it is assumed their classmates stayed in Spain for safety.

Tammy and Andy reunite with their father, Donald, and they meet Scarlett, the medical officer of the United States military, and Tammy befriends her. Later, Donald has to tell them of his wife's supposed murder by the Infected who attacked his house. Tammy is outwardly emotional about her mother's alleged death. Tammy barely talks in the remniscience, unable to comprehend the disaster. But Andy has nightmares about forgetting what Alice looked like, so Tammy suggests they return to her house in London to get a picture. Tammy and Andy sneak out of District One, the Isle of Dogs repopulation center, and they run down the streets of London laughing and celebrating being free out of quarantine. Tammy makes a bold move when she goes into a pizzareia and retrieves a key of a motorbike from a rotten corpse. She then drives on with Andy to their home.

In the house, Tammy is downstairs and finds a picture of their mother. Andy later finds their mother in the attic, alive but ill, and Tammy is alerted by his screams due to her hugging him too tight. Tammy rushes up and finds her living mother. Then the United States Army come and take their mother from them, quarantining her, and take Tammy and Andy back to District One.

Tammy and Andy are quarantined for disease and Donald berates them but Tammy shouts at him for lying to them. Donald visits Alice, who has the Rage virus but is immune, when Donald kisses Alice, he becomes an Infected, starting the Infection all over again. He runs round District One Infecting soldiers and killing them.

Tammy and Andy are told by Weise, their guard, that despite the blackout, things are fine, and when Weise goes to get weapons, he is Infected by Donald, and the Infected Weise runs back in trying to kill Tammy and Andy, but Scarlett kills Weise. Then they try to evacuate Tammy and Andy, Scarlett saying their blood has a cure because of Andy's different eye colours. Tammy and Andy are seperated in the evacuation, and Tammy and Scarlett go to a warehouse.

Tammy is reunited with Andy, and Andy says their father is now an Infected, and started the new Outbreak. Tammy is unable to fully cope with the news. They escape snipers, and Infected, and run to Regent's Park with defective soldier Doyle and Scarlett. Hordes of Infected attack the Park but Flynn the pilot kills the Infected. Then Tammy and Andy and Doyle and Scarlett run pursued by Infected to a jeep, but it won't start, so Doyle sacrifices himself by letting flamethrowers kill him when he is starting the jeep for them.

Tammy leads Andy and Scarlett through the pitch black corpse strewn Underground, showing her courage, and she gets lost from Scarlett in the place. Scarlett is killed by the Infected Don, and when their father tries to Infect Andy, Tammy shoots her father dead to save her brother. Then they reunite with Flynn who Tammy says to him is "just them." Then Flynn flies them over the Channel to Paris.

28 days later, the helicopter is abandoned. It is unknown what happened to Tammy, but she may have been killed by Infected.

Tammy in bed with Andy

Tammy hidding with our survivors during the Second Outbreak. 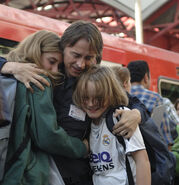 Tammy and Andy with their father Donald

Tammy and the others are being chased from the Infected.

Tammy confronts Flynn in the stadium.

Add a photo to this gallery
Retrieved from "https://hero.fandom.com/wiki/Tammy_Harris?oldid=1941804"
Community content is available under CC-BY-SA unless otherwise noted.