Heroes Wiki
Register
Don't have an account?
Sign In
Advertisement
in: Outdated Articles, Articles under construction, Female,
and 38 more

Member of the Restoration (Formerly)

Tangle the Lemur is a one of the main protagonists in IDW Publishing's Sonic the Hedgehog comic book series, based on Sega's video game franchise of the same name. She is a teenage anthropomorphic ring-tailed lemur who first became acquainted with Sonic the Hedgehog and his friends during the fallout after the war to retake Sonic's world from Dr. Eggman (as seen in the 2017 video game Sonic Forces). When Tangle sprang into action to defend her hometown from Eggman's Badniks, she encountered Sonic when he stopped by to help, and they have been friends ever since.

Tangle was the first original IDW Sonic character to be shown to the public, and quickly became hugely popular upon her reveal in promotional material. She continues to enjoy strong positive reception from Sonic fans, even getting her own mini-series alongside fellow heroine Whisper the Wolf.

Tangle is an anthropomorphic ring-tailed lemur with primarily light gray fur and purple eyes. She possesses a small black nose and a long bushy tail with gray stripes. She also has gray fur around her muzzle and between her eyes, and gray fur around the sides of her eyes and on her eyelids and round ears. She also has extra fur on top of her head and chest, and small cheek tufts.

Tangle wears a short-sleeved black bodysuit with orange stripes down the sides, a yellow sleeveless top, and detailed yellow hi-tops with white laces and soles, black details, and orange cuffs. She also wears yellow sports tape around her forearms and fingerless black gloves made of black sports tape with orange backings.

Tangle is an excitable, energetic and happy-go-lucky person who loves adventure. She likes to be part of the action whenever trouble is afoot and will try to help those in need however she can. Tangle is known to be reckless and sometimes has the tendency to act first regardless of consequence. However, will usually try to have an positive out look on dire situations, even during times when Sonic finds it difficult to remain optimistic. Tangle has also shown to be claustrophobic and gets stressed when in dark, confined spaces. 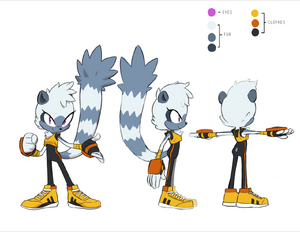 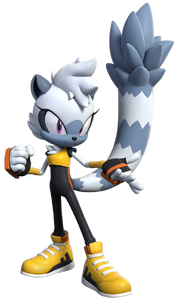 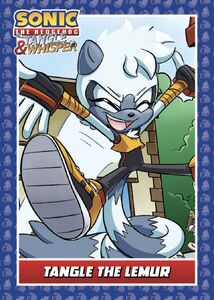 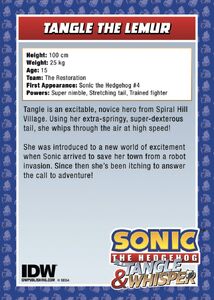 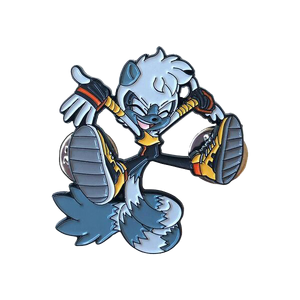 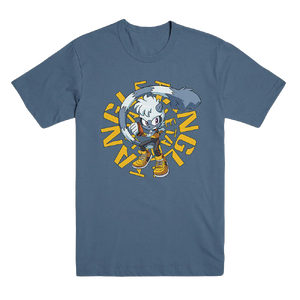 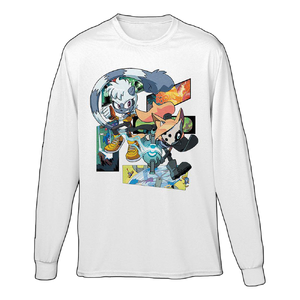 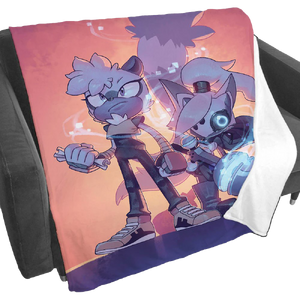 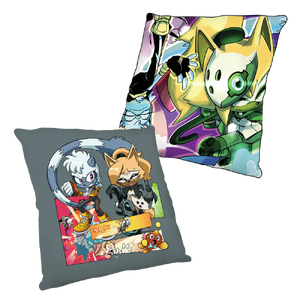