Take revenge on Muzan Kibutsuji for murdering his family and to prevent other people from suffering the same tragedy as he had (Suceeded).
Turn Nezuko back into a human (suceeded).

Tanjiro Kamado is the main protagonist of Demon Slayer: Kimetsu no Yaiba. He is also the older brother of Nezuko Kamado and is the oldest child of the Kamado family. He is a Kanoe ranked Demon Slayer and a member of the Demon Slaying Corps. He is hunting down the demon who is responsible for the murder of his family and his sister's transformation into one.

Tanjiro is a young boy who is short for his age, with rather tanned skin and an athletic physique. He possesses ruffled burgundy hair that casts notably dark shadows on itself, combed back to expose his forehead, and wide, dark eyes with white pupils that appear dark pink around the lower section of their irises. He also has a birthmark on the top left of his forehead, which originally looked somewhat like a graze until his fight with the Hand Demon during the Final Selection Arc, after which it appears more like a large, dark red scar. It is noted that his hands are visibly tougher than someone his ages should be as a result of his rigorous training under Sakonji Urokodaki.

Tanjiro wears a checkered dark turquoise and black patterned haori over the standard Demon Hunter uniform, which consists of a dark brown gakuran jacket, a white belt around his waist and baggy pants that extend into tabi socks, as well as zōri and bands of white cloth wrapped around his calves. He also wears a pair of hanafuda earrings, decorated by a red sun symbol and carries a large wooden box on his back, where his sister sleeps during the day.

Tanjiro is kind by nature and has been described by others as having very gentle eyes. He exhibits a great deal of determination and will not give up once he has a goal to achieve; the best example of this being his relentless quest to find a cure for Nezuko. Even though he is relatively strong on his own, Tanjiro isn't opposed to asking others for help when he needs it. He is very protective of his friends and even more so of his younger sister. However, despite his kind and understanding nature, Tanjiro does have a limit to his tolerance and has a distaste for rudeness, as he easily becomes annoyed by Zenitsu Agatsuma's constant whining, and angered by Inosuke Hashibira's barbaric actions.

Tanjiro's most notable attribute is his ability to empathize with anyone, even demons, which often made him hesitate before delivering the final blow. This moment of hesitation has a downside, as it has allowed some Demons to take advantage of Tanjiro's understanding nature to recover and continue the fight, though this occurs rarely. However, as Tanjiro gains experience over the years of his service, he becomes more calculating and strict in his decisions. His courage to protect the weak commits him to face his enemy with respect and dignity, whether versus good people or evil Demons. 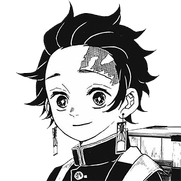 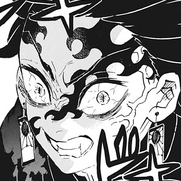 Tanjiro as a demon. 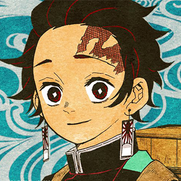 Tanjiro's color scheme in the manga. 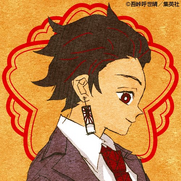 Tanjiro with a school uniform. 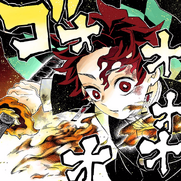 Tanjiro in the manga

Tanjiro during his debut

Tanjiro after the beginning of the story. 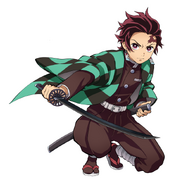 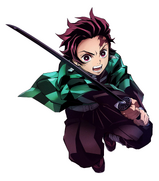 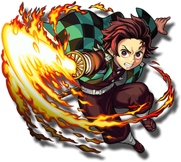 Tanjiro using the Dance of the Fire God 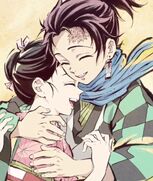 Tanjiro during the Final Selection

Congratulations for completing 1000 sword swings... Now you must do 500 more!

Tanjiro having a hard time lying

Tanjiro and his beloved father, Tanjuro were very close.
Add a photo to this gallery

Retrieved from "https://hero.fandom.com/wiki/Tanjiro_Kamado?oldid=2008463"
Community content is available under CC-BY-SA unless otherwise noted.