Assist Richtofen and save the universe (succeeded)

In Black Ops III, his Primis version serves as one of the four main protagonists of the Call of Duty Zombies storyline. He first met Richtofen at Northern France in 1918. He, along with Takeo, Nikolai, and Richtofen, helped free Samantha Maxis from Agartha. The union of the four marks the return of Primis, unbeknownst to them. Samantha then sends them to their next destination.

Dempsey, Takeo, and Nikolai learn about Richtofen's multi-dimensional travels, and try to stop him because they fear he will disrupt the continuity of the dimensions. They failed multiple times, but arrive at the Original Timeline where original Richtofen traps Samantha and her father in the teleporter. Primis Richtofen arrives later and kills his original self, and explains that there's a chain of events that must be set in motion by obtaining the other Ultimis souls.

They landed on the abandoned Group 935 fortress base but realized that Ultimis Dempsey is already going to the moon from the rocket. After making radio contact with Dr. Groph, Richtofen masquerades as his Ultimis older self in order to fool Groph. However, Groph becomes suspicious of Richtofen's change of personality and announces him as an imposter. Using the Death Ray, the young four manage to bring the rocket containing the Ultimis Dempsey back to the castle, much to Groph's anger, who activates a failsafe so they couldn't touch the chamber.

Using the Vril Device obtaining from the crash site, the young four awaken a ghost Keeper and help it return it to its physical form before it returns the favor and brings the M.P.D. from the Moon to the castle. However, the Keeper becomes corrupted, forcing the four to battle it, eventually defeating it. After defeating it, Groph expresses his extreme anger, vowing to destroy them and the castle itself. In order to tie up these loose ends, the four use the Summoning Key to launch several missiles towards the Moon, destroying it, ultimately destroying Griffin Station and killing any Group 935 scientist at the station, including Groph. Richtofen lets Dempsey kill Ultimis Dempsey and moved on to find Takeo 1.0 on the island of the Division 9 Facility.

Later, Richtofen was present when the Ultimis Takeo Masaki was cured from being a Thrasher to collect his soul. After the Ultimis Takeo honorably sacrificed himself for a better future, Richtofen then preserved his soul. The four went to Alcatraz island to gather the four blood vials from the four cursed prisoners. Then went to get Nikolai's soul in Stalingrad.

The four gathered to go the house and meets Maxis. Richtofen shows the Summoning key to Maxis and showed Maxis the future of Element 115. Maxis grabs his axe and destroys the teleporter. Maxis then hear voices from the Basement and accidentally grabbed the Summoning key that preserved the Shadowman's soul. The Shadowman steals Maxis's body and releases his homeland to Dr. Monty's world. Richtofen and the three come back to the house and sees the Shadowman and his home world. The four gathered up one last time to fight the undead horde and the Apothicons.

After the Apothicons' defeat, Maxis in the Summoning Key sacrifices his life by putting The Dark Aether inside the Summoning key. Dr. Monty states that all the evil is gone forever, but tells the four that they're supposed to no longer exist. Thanks to the blood vials, they still exist. Richtofen states to send them a place where they never been. But Monty disagrees and tries to wipe them out, but changes his mind. The four turn into Primis and sent back in time where the Apothicons were defeated in the Middle Ages, completing the Cycle. 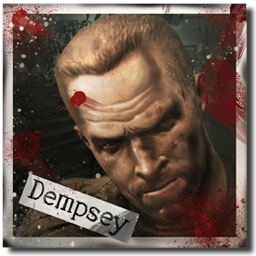 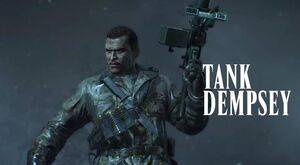 Tank Dempsey in the intro of "Origins". 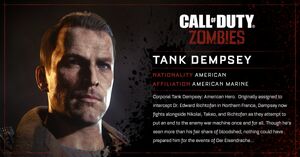 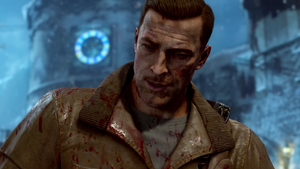 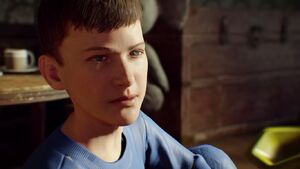 Tank Dempsey as a child.
Add a photo to this gallery

Retrieved from "https://hero.fandom.com/wiki/Tank_Dempsey?oldid=2189928"
Community content is available under CC-BY-SA unless otherwise noted.