Tanya Mousekewitz is a mouse who is Fievel's older sister, the tritagonist of An American Tail: Fievel Goes West and a supporting character in all four same franchises.

In the original film, Tanya is shown to be a very pretty young mouse, sporting a blue blouse with a long yellow skirt, frilly white pantalettes, and a red babushka (headscarf) given to her by Papa Mousekewitz as a Hanukkah gift. By An American Tail: Fievel Goes West, she has aged considerably since then, now sporting a brown and orange dress with a long red skirt with a square brown patch on one side, and her hair is now done up in a large ponytail. When Miss Kitty gets her ready to perform for Cat R. Waul's saloon full of his Cactus Cat Gang's rambunctious members, she sports a shoulder-less, sleeve-less brown and orange gown with a long red skirt, with no patches on it, an orange feather on her head, and makeup that Miss Kitty applies to her, along with a pair of frilly white pantalettes under her dress. She later washes the makeup off, but wears the outfit for the remainder of the movie.

Tanya is shown to be very kind-hearted and full of faith. Even after her parents believed Fievel drowned at sea after being washed overboard from the ship taking them to Ellis Island in New York Harbor from Hamburg, she maintained belief that Fievel was still alive somehow and they would reunite with him. Her belief is rewarded when they meet up with Tony Toponi and Bridget and find that Fievel is indeed still alive after finding his hat that Papa gave him for Hanukkah, leading to where they track him down in Orphan's Alley with help from Gussie Mouseheimer and Tiger and the family is finally reunited.

By An American Tail: Fievel Goes West, Tanya has matured to the point she dreams of becoming a famous singer, but when she tries to sing one night, the human neighbors are infuriated and throw fruit and vegetables at the Mousekewitz home to shut her up, much to her annoyance. She gets her wish when, while singing "Dreams to Dream" while working on her father's new violin shop in Green River, Cat R. Waul, attracted to her beautiful singing voice, takes her to Miss Kitty to be properly dressed to debut as his new diva for his saloon. Despite her initial nervousness, she is able to soon get Cat R. Waul's gang to enjoy her singing, and even join in with her during her number, "The Girl You Left Behind". This causes her to become too caught up in her newfound fame to realize the severity of the situation when Fievel tries to warn her of Cat R. Waul's true intentions, but when Cat R. Waul reveals the truth, Tanya quickly puts her own life on the line to save her family and the other mice from becoming the Cactus Cat Gang's meal ticket, using Cat R. Waul's love for her as his star to stop him from triggering his trap. However, after Cat R. Waul and his gang are defeated, remembering what Miss Kitty said about how the real woman is what's under the mask of makeup, Tanya washes her makeup off, knowing her real self was just being herself.

In the first film, Tanya has traveled to America with her family, and misses her absent brother. When she found out that her nickname Tilly she was given at Ellis Island is a take on Fievel's nickname Filly when she hears Tony and Bridget shouting it while looking for Fievel, this makes it so Fievel reunites with his family once again. Tanya and Fievel later ride on Henri to see the completed Statue of Liberty, who apparently smiles and winks at them, welcoming them to the United States as brand new Americans.

In the second film, Tanya has a much larger role. She tries to become a singer so much, it even attracts Cat R. Waul, who decides to make her the star of his saloon, which proves to be a rousing success thanks to his gang loving Tanya's performance. Tanya later uses Cat R. Waul's love for her to save her family and other mice from his trap, as he refuses to trigger it if she's in the line of fire herself.

An American Tail: The Treasure of Manhattan Island

In this film, Tanya is again younger, supporting the theory that it takes place just after the first movie but before the second. (Or the 2nd film, along with the TV series, was all a dream sequence) Tanya's personality has become sassy and sarcastic in this movie, and she gets very jealous of her brother getting to go on adventures all the time. When adding her sarcastic comments to family arguments, she is told "Tanya, don't help!" by her parents. She forms a sisterly bond with Cholena when she is brought to the surface, helping make a dress for her and showing her around New York. When her parents agree to let her come with to bring Cholena back home and protect her from the police she is thrilled at finally getting to participate in an adventure. And when Tony is fighting Scuttlebutt, Tanya comes to Tony's aid by punching Scuttlebutt right in the face. She is last seen at the celebration ceremony of the new labor union for the cheese factory.

An American Tail: The Mystery of the Night Monster

Here Tanya has a job as a secretary at the Daily Nibbler, a job Tony helped her get. She wears a professional dress, and tries to act more adult, partly because of the crush she has on editor Reed Daley. She's embarassed to have Fievel tag along with her, afraid he'll make her look less professional. Reed Daley doesn't return the feelings though, and ignores her. Tanya's hopes are dashed when Nellie Brie and Reed get together at the end of the movie, and in the final scene where the family is at the beach, she laments that her life has no meaning. But before she can lament further, she is brought into a group hug along with Mama, Papa, Tony, & Tiger, which she happily recuperates, showing that it hasn't affected her and she remains happy and hopeful. 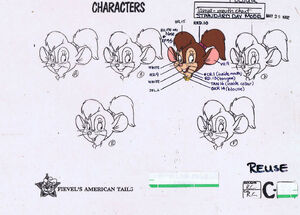 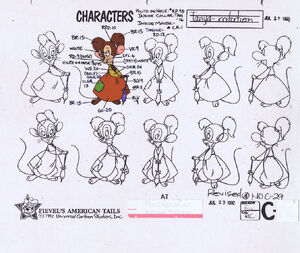 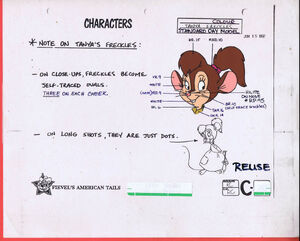 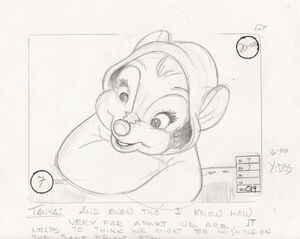 Storyboard of Tanya sing "Somewhere Out There"

An American Tail: The Treasure of Manhattan Island

An American Tail: The Mystery of the Night Monster