Officer in the Empire Army

Finding ways to kill "Being X".
Killing.
Torturing.
Ingratiating herself with superiors

Rise in the ranks through the military.

Live a comfortable life away from danger.
Win the war.
Get revenge on and kill "Being X".

Tanya von Degurechaff is the main protagonist of the light novel/anime Youjo Senki: Saga of Tanya the Evil. Originally a salaryman who was murdered in 2013, he was reborn as a girl living in an alternate version of Europe during World War I.

At just nine years of age, Tanya enters the Empire's Mages troops and is promoted to Second Lieutenant. Her talents, strategies, efficiency, and ruthlessness make her a useful asset for the Empire and a threat on the battlefield.

Since she graduated from the War College as one of the twelve knights, she's granted the title of von.

She is voiced in Japanese by Aoi Yūuki and in English by Monica Rial.

Not much is known about the protagonist in his original life, including his name. He was a salary man in 2013 Japan who gained a reputation for his ruthlessly utilitarian and career-minded personality. He was murdered by a former employee whom he had fired for valid reasons earlier that day. However, after his death he was confronted by an entity calling itself God. As an atheist, he denied God's existence, choosing to dub it as "Being X/Existence X" (variable by translation). When the two get into an argument about faith and modern humans, Being X became enraged. The salary man claimed that modern technology and convenience leads to a safe world where gods are not needed. As punishment for his lack of faith, Being X decided to reincarnate him in a world without these benefits in the hopes to crush the salary man's will and force him to accept Being X as God. He was sent to an alternate World War I Europe, were he was reincarnated as a orphaned baby girl. Before his reincarnation, the salary man was warned that if he did not die in a peaceful, natural way, or without faith, he will not be reincarnated again and sent to hell.

The protagonist was reborn in an alternate reality of 1913, as an orphan girl named Tanya. Spending the first years of her life in a nunnery, her outlook for a good life initially looked slim. Even worse, she was living in the Empire (the equivalent of Imperial Germany), a nation beset on all sides by potential enemies. Luckily, Tanya had exceptional magic potential, a rare talent sought after in the Empire. Knowing that, with this aptitude, she would eventually be conscripted; Tanya volunteered for the army at the age of 8 in order to receive officer training. She intended to rise in the ranks and then live a comfortable life in the rear lines away from danger, both for her sake and in order to spite "Being X". Yet, even though Tanya was successful at impressing the leadership, it backfired; as her talents made her a necessary asset on the front lines.

She's heartless, selfish, amoral, and terrifyingly ruthless. Yet at the time of the bloodiest war of this world, she might be described as the "ideal soldier". On the outset, Tanya is viewed as either a patriotic, caring, hero; or a bloodthirsty, merciless, monster.

Tanya has been described as a cute, pale skinned-child with blonde hair and bright blue eyes. Her eyes glow visibly when using her magic. When praying to Being X, her eyes turn yellow, and when self destructing they become red. She is short for her age due to malnutrition, and is concerned about her slow growth. She wears a military uniform in the rank of a Warrant Officer and later a lieutenant commander, then a Major after graduating from the military academy.

On the outside, Tanya appears to be a very precocious young girl, who has been credited by many of her peers to be a model soldier in both mindset and combat prowess. But deep inside, she is a highly power-hungry, calculating, manipulative, villanious, and sadistic individual. Especially when in battle against her enemies, she shows utter ruthlessness and bloodlust. Tanya also strongly disapproves of failure and disobedience from her subordinates. Due to her previous life of strictly following rules, she places immense value on her orders and wartime law. She feels no comradery, and she is generally revolutionary and nihilistic, unless their deaths would affect her ability to be promoted. This even applies to the soldiers that she herself commands. Having previously been an adult man, she hates people treating her as a child.

While she has little to no empathy for her fellow soldiers or her victims, Tanya still has a few standards: She loathes her superiors and peers who endanger men needlessly and detests wasteful military spending. The sight of enemy nations who had no remorse attacking the Empire but are ironically infuriated when they themselves are attacked made her very angry. When following the orders to destroy Arene City in spite of civilians still present there, Tanya was willing to have the city's fleeing civilians caught in the artillery's crossfire. This was perhaps only in retaliation for their militia soldiers, who beat, tortured and shot unarmed and bound Imperial soldiers more for self-righteous "fun" than outright self-defense. She doesn't take pleasure in causing the death of civilians, but considered it necessary to have them terminated because she is fully aware that should any of them spared, they will eventually grow to become the Empire's enemies.

In spite of her age, Tanya possesses enormous magical powers. These enable her to fly at high speeds, fire explosive bullets, create protective shields, project stationary decoys, magnify distant targets, conjure a destructive magic laser (in the manga), create magic blades from her hands (in the manga) or imbue the bayonet on her rifle with mana (in the anime), and has even used her jewel core to turn herself into a flying bomb. Compared to others, Tanya has a high latent magical ability. Because of this, she is the only one capable of using an experimental Type-95 Elenium jewel core. However, to use it, she must pray to Being X. This is an arrangement she is not happy with, and extensive use can cause her to lose her free temporarily. Her small size and immense magical powers makes her highly mobile and destructive. 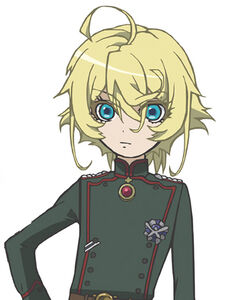 Retrieved from "https://hero.fandom.com/wiki/Tanya_von_Degurechaff?oldid=2238431"
Community content is available under CC-BY-SA unless otherwise noted.