Pig boy
Master (to by Gurgi)

Monarch
Taran is the main protagonist in Disney's 25th full-length animated feature film The Black Cauldron. He is a farm boy who dreams of becoming a warrior. When his pig, Hen Wen, gets kidnapped, he comes to rescue her. He is also in love with Princess Eilonwy.

He was voiced by Grant Bardsley.

Taran is a slender and handsome young boy with fair skin, red hair and green eyes. He wears a green vest, a yellow long-sleeved shirt, green pants and brown boots.

Taran is headstrong and courageous, though occasionally foolhardy, and harbors an intense desire to prove his worth and heroism through noble acts. Indeed, much of the movie centers on Taran's search for his own worth.

Taran was a foundling discovered by Dallben, the enchanter and farmer. As Taran grew up, he became restless and longed for adventures beyond the borders of Caer Dallben. His time would eventually come when, just after being granted the position of Assistant Pig Keeper for Hen Wen (or Pig Boy for short), Dallben's oracular pig, the animal escapes her enclosure. He eventually stops dreaming of being a warrior at the end of the film and he finally knows his place as an assistant pig-keeper. 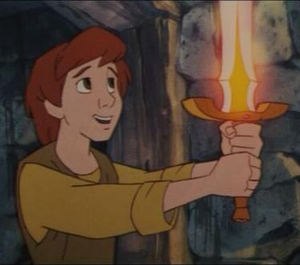 Retrieved from "https://hero.fandom.com/wiki/Taran?oldid=1655005"
Community content is available under CC-BY-SA unless otherwise noted.