Tari is a major protagonist of the Australian adult-animated web series SMG4 and the main protagonist of the 2019 web series, Meta Runner. She is a very kind and insecure girl who didn't really know who she is and that they have experimented on her, so now she is able to warp into video games.

Just like her SMG4 counterpart, She is a kind, insecure and shy girl, who likes video games and rubber ducks. She is shown to be a pacifist, but is very skilled with weapons such as firearms (most likely due to her prosthetic arm) and she appears to be very danger prone, as she often finds herself getting hurt or in danger. 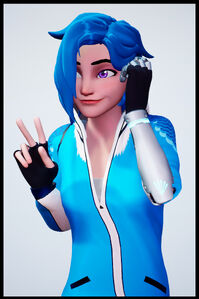 Retrieved from "https://hero.fandom.com/wiki/Tari?oldid=1778247"
Community content is available under CC-BY-SA unless otherwise noted.