Captain in the Regular Army

Tarma is the son of a distinguished soldier, who immediately entered the Special Forces Training School after spending his time in junior high school. When he was 20 years old, he assigned the P.F. Squad on the operation to save the president, where he saw Marco Rossi and became best friends. Upon a discovery that Marco had chosen for a counteroffensive during a war, he volunteered where they resisted through and win the war together. Following the event, both he and his best friend were promoted while his military rank became captain. In his private rank, he often cheers up with Marco, but holds him up in the highest regard to become a Regular Army soldier. He is interested in inventing motorcycles with a knack that rivals are even pros. He had retired and intended to launch a motorcycle shop during the preparation of the First Modern War, but his superiors coaxed him to remain in military service. Also, fermented beans on rice is much delicious to him as his favorite food.

Tarma is best skilled in riding slugs as he does in both Metal Slug 6 and Metal Slug 7, especially fixing the vulcan cannons in one position when piloting a slug. Also, he shall give more artillery ammunition for the slug and it will have double resistance against hostile assaults. However in Metal Slug XX, when he's out of a slug, he can perform Kick Slug to replenish its armor. This move won't work with the Ostrich Slug obviously. 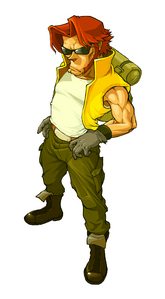 Tarma Roving as he appears in Metal Slug XX.
Add a photo to this gallery

Retrieved from "https://hero.fandom.com/wiki/Tarma_Roving?oldid=1749829"
Community content is available under CC-BY-SA unless otherwise noted.