Tashigi is an antagonist hero turned supporting character for Punk Hazard Arc from anime and manga One Piece. She is a Marine Officer and one of the most good members of the Marine. She was originally introduced as a Master Chief Petty Officer in Loguetown until she got promoted to the rank of Ensign, due to the Alabasta events. During the time-skip, she is promoted to the post of Captain.

Tashigi was first introduced when the Straw Hat Pirates docked in Loguetown, where she was stationed. Smoker, her superior officer, seems to regard her as a protege; the two work very well together. While adept at sword fighting, she is unusually clumsy, which tends to get on Smoker's nerves. She is also very well-versed in katana, knowing their names and origins. Zoro often feels highly uncomfortable around her due to her striking resemblance to his late friend Kuina, who she fights like and even shares philosophies with.

Like Smoker, Tashigi has her own view of "Justice" which differs from the Marines' own definition, and will fight for what she sees as the right thing to do. Tashigi's stated goal is to remove all Meido, a class of famous swords, from the hands of those who would use them for their own selfish ends. 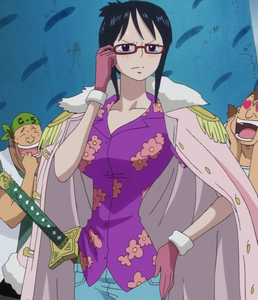 Retrieved from "https://hero.fandom.com/wiki/Tashigi?oldid=2218560"
Community content is available under CC-BY-SA unless otherwise noted.