Eating everything on his way.

Taz the Tasmanian Devil or more oftenly called Taz, is a major character of the animated series Looney Tunes and Merrie Melodies, and the main protagonist of Taz-Mania. He is Bugs Bunny and Daffy Duck's pet and former enemy.

Robert McKimson designed the character after the real-life Tasmanian Devil, an animal native to Australia, and the Tennessee Top of American folklore; however, the only real resemblance between the Tasmanian Devil and McKimson's beast is their ravenous appetite. In fact, it is this appetite that serves as the Tasmanian Devil's main characteristic. The Devil devours everything in sight, including boulders, trees, shrubs, and hills, all the while whirling about like a miniature cyclone that sounds like a dozen motors all whirring in unison. The Tasmanian Devil also harbors a special craving for rabbit.

It is this hunger that serves as the impetus for McKimson's "Devil May Hare" (first released on June 19, 1954). The Devil stalks Bugs Bunny, but due to his dim wits and inability to frame complete sentences, he serves as little more than a nuisance. Bugs eventually gets rid of him in the most logical way possible – matching him up with an equally insatiable female Devil. The character's speech, peppered with growls, screeches, and raspberries, is provided by Mel Blanc & now provided by Jim Cummings, who is most famous for doing Winnie the Pooh & Tigger in the Disney cartoons.

Producer Edward Seltzer, head of the Warner Bros. animation studio, ordered McKimson to retire the character since it was "too obnoxious". After a time with no new Devil shorts, Jack Warner asked what had happened. He then saved the Devil's career when he told Seltzer that he had received "boxes and boxes" of letters from people who liked the character.

As the youngest of the Looney Tunes, Taz is generally portrayed as a dim-witted teenager-type with a notoriously short temper and has little patience. He will eat anything and everything, with an appetite that seems to know no bounds. Taz is best known for his speech consisting mostly of grunts, growls, rasps, and his ability to spin and bite through just about anything.

All five original Tasmanian Devil shorts are featured in Looney Tunes Platinum Collection: Volume 1 as is "The Fright Before Christmas". 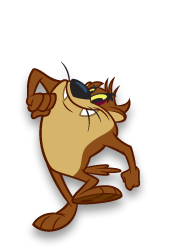 Taz in The Looney Tunes Show 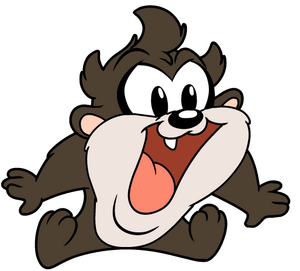 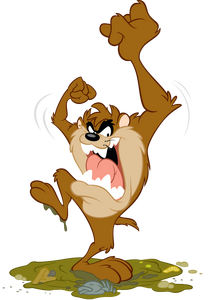 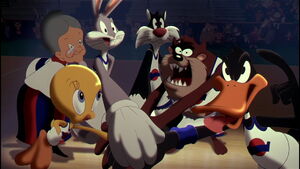 Retrieved from "https://hero.fandom.com/wiki/Tasmanian_Devil?oldid=1698712"
Community content is available under CC-BY-SA unless otherwise noted.