No information
Tatsuya Yamashiro is a character in the Yu-Gi-Oh! ARC-V anime. He is friends with Ayu and Futoshi. He is enrolled in You Show Duel School and proved to be very knowledgeable and intelligent.

Tatsuya is a young boy with blue hair and shoes. He wears a white short sleeved shirt and brown vest, along with a watch and short khaki pants. Tatsuya has purplish-gray eyes.

Tatsuya watched Yūya Sakaki and Noboru Gongenzaka's Duel in You Show Duel School was concerned when the Solid Vision disappeared and Yūya fell to the ground who managed to make a quick recovery and pull off a funny face to reassure him. He was very happy that Yūya defeated Ishijima and returned to You Show Duel School with several applicants see Yūya and Yuzu's exhibition match. However, Yūya failed to Pendulum Summon and is defeated by Yuzu. Yūya showed Yuzu and the applicants his Pendulum Cards afterwards, annoying the applicants as they thought that Yūya might have cheated against Strong Ishijima and they couldn't use the Summon without the Pendulum Cards. All but Tatsuya left, though the boy believed in Yūya, and Gongenzaka encouraged Yūya to support his fans. Yūya agreed, vowing to master Pendulum Summoning. Later on, he along with Ayu and Futoshi all asked to see a Pendulum Summon, which Yūya had finally started to get used to, but they were interrupted by Shingo, who invited them to LDS and offered the use of the Center Duel Field to Duel Yūya. After Shingo forcibly took Yūya's Pendulum cards, Tatsuya, Ayu, Futoshi, and Yuzu were taken hostage on top of a suspension bridge in "Prison Tower of Darkville". Tatsuya watched Yūya Duel and defeat Shingo. The building where he was put on collapsed, but he was rescued by "Timegazer Magician". After Sora Shiun'in knocked out Shingo and his lackeys, he introduced himself to Tatsuya and the others. During Yūya and Sora's Duel, he explained the Fusion Summon to Futoshi and said this is the first time he saw it. He was worried when "Scissors Bear"'s attack was higher than Yūya's "Odd-Eyes Pendulum Dragon", he explained to Futoshi when Sora activated "Toy Parade" that if "Scissors Bear" destroys another monster and equips it, it gains an additional attack. Tatsuya noted that Yūya's heart was damaged after losing his ace monster. He was surprised to find that Pendulum Monsters are sent to the Extra Deck when they are destroyed and was happy when Yūya won and when Sora enrolled at You Show. Tatsuya received the news that Yūya apparently attacked Shingo. Tatsuya didn't believe it and watched Yūya, Yuzu, and Gongenzaka fight against the LDS students. He later watched Yūya Duel Reiji Akaba and Shūzō. When Yūya tried to ask him for help so that he could qualify for the Junior Youth Championship, he declined stating that he belonged to the Junior Division while Yūya belonged to Junior Youth'Division, so their Duel would be invalid. During the Duels arranged by Nico Smiley to help Yūya to qualify for the Junior Youth Championship, he along with Ayu and Futoshi became Yūya's cheering squad and cheered for him during his Duels. But on request by Nico, they stayed behind the scenes during Yūya's qualifying Duel against Gongenzaka, but later on was allowed to go in-front and cheer him and congratulated Yūya when he won and finally qualified for the Championship.

Having qualified for the Maiami Championship before Yūya, Tatsuya and the other You Show students received a pep talk from Shūzō and boarded the van to go to the Championship, but they were surprised to find Yūya missing. Yūya later showed up after they had looked for him. After the opening ceremony, he watched Futoshi's Duel with Takeshi Shimizu and congratulated him for winning. He watched Ayu's Duel with Reira Akaba who intrigued him. He tried to speak to him but Reira ignored him. Tatsuya continued to watch her friends Duel in the Championship, and on the second day of the tournament watched Gongenzaka's Duel with Gen Ankokuji and Yūya's rematch with Shingo Sawatari. The tournament took a darker turn after Sora's Duel with Shun Kurosaki, which left Sora badly injured. In the period of the tournament after Yūya fell into a coma and Sora disappeared, Tatsuya witnessed the rest of the first round of the Junior Championship and the second round of the Youth Championship, in which Reira defeated Futoshi. When he heard that Yūya had woken up, Tatsuya hurried to the stadium with Futoshi and Ayu. They arrived and were happy to see that Yūya was okay. He then witnessed the brutal Duel between Isao Kachidoki and Yaiba Tōdō, which left Yaiba hospitalized, and Tatsuya was shocked to learn that Yūya was Dueling Isao next. As he had worried, the Duel with Isao went badly for Yūya until he abruptly changed his manner and swiftly defeated Isao with "Dark Rebellion Xyz Dragon". Tatsuya watched her Junior Youth classmates participate in the Battle Royal, but Yuzu and Yūya soon disappeared when their camera feeds were cut for maintenance. Frustrated with not knowing what was going on and enduring Yōko Sakaki's strange antics, Ayu led Futoshi, Tatsuya and Shūzō in a dash to the city, but they were informed that they couldn't return to their homes while the Solid Vision was active in Maiami City. At the Youth Class finals, Ayu and Futoshi later warned Tatsuya to be careful before his Duel with Reira, reminding him that Reira used Fusion Summoning and Synchro Summoning. He thinks that he can win with his own trump card "Entermachine Gadget Giant" but is defeated by Reira's Xyz Monster "CCC Rock Armor the Embodiment of Heavy Armor", Tatsuya congratulated Reira and compared him to his brother, and Reira thanked him with a timid smile.

After Yūya returned to the stadium with Yuzu, Tatsuya learned about the invasion of the Obelisk Force from the Fusion Dimension. He later watched the Duel between Yūya and his mother, and bid him goodbye after the Duel, as he departed for the Synchro Dimension. 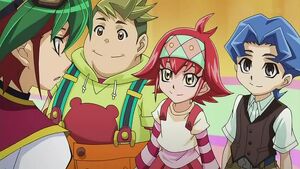 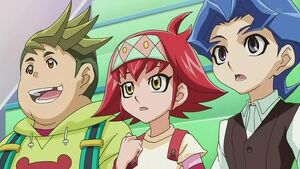 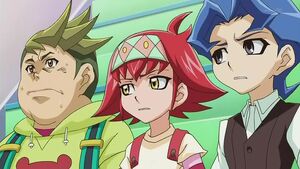