Welcome to the NHK

The NHK (in his head)

Tatsuhiro Satou is the main character of the novel, manga and anime series Welcome to the NHK. He is a 22-year-old hikikomori (the Japanese term for shut-in) and has been one for nearly 4 years. He is also a college dropout. At the start, he is depicted as a hopeless human being destined to rot in his apartment room, until one day, he came across a mysterious girl who desires to save him from his Hikikomori state.

Satou is a tall and often times shady looking man. He is sometimes seen with stubble and messy hair, has deep eyes, and huge eye bags. He normally wears a jacket, cap, and glasses whenever he goes out, giving him the typical otaku/stalker look.

He is sometimes depicted as a thin, malnourished individual, but this was only when he faces times of absolute need for food.

He is often seen smoking a Marlboro cigarette.

Satou is a highly unstable and paranoid man; he is convinced that he's being targeted by a conspiracy known as the NHK, and that he must remain a hikkikomori in order to keep them from destroying the entire world, and frequently has abnormal delusions. Overtime, however, it becomes increasingly clear that these nonsensical beliefs are just excuses he's come up with to justify his lifestyle. He is also a massive pervert, something he barely keeps concealed, often having lecherous fantasies about Misaki and Hitomi, and something even Yamazaki.

Satou is a rather indecisive and lazy man; deep down, he knows how unhealthy his lifestyle is, and he can't keep continuing to live the way he is. However, any attempts to escape from his lifestyle are short-lived, as he decides that it is too much of an effort to actually do anything about it. He changes his mind very often, as shown when he constantly changes his mind about how to proceed with Misaki. He can also lose hope fast, made apparent during the production of his and Yamazaki's gal game where he is determined to start but quickly loses that determination mid way, saying that the game has no chance of getting finished anyway and that he has other things to do.

Satou is also a terrible liar; back when he was in grade school, he would often get into all kinds of trouble, but whenever his mother scolded him for it, he would make up excuses or blame what happened on others. One time, however, his mother did believe one of his lies, and he felt so crushed that he made a vow to never lie to her again. As a result, whenever he does lie, he feels extremely frustrated and guilty, making it easy for people to see through his deception. At the same time, he can easily see through Misaki's obvious lies, and constantly suspects her of having an ulterior motive beyond helping him.

After learning that Misaki has a perfect view of his apartment from her mansion, Satou decides to break off his contract with Misaki. Despite this, before and after breaking it off, he finds himself thinking about her at highly inappropriate times, much to his annoyance. After Hitomi approaches him and asks that they go on a trip, Satou agrees, as he always regretted not going all the way with her back when they were in high school (it's implied they had a one-night stand, but that was it). However, it's only much later that Satou discovers he's become part of a suicide pact. Even after convincing the others not to go through with the suicide, Satou attempts to commit suicide himself, and is only saved after being talked down by Misaki and Yamazaki, and saved by Hitomi and the other participants when he nearly falls off the cliff.

Despite his paranoid nature, Satou, while not exactly stupid, is deceived quite easily, and Yamazaki outright calls him a "gullible simpleton". This is proven when he becomes addicted to an online RPG named Ultimate Fantasy, and develops a superficial crush on a cat girl named Mia (which is ironic, considering he isn't exactly a cat person, describing them as "ungrateful"). He is devastated when Yamazaki reveals that he was tricking him the whole time, even though he had good intentions in mind. Not long after, he is manipulated into taking part in a pyramid scheme with Megumi, and buys into her lies even after he figured out just what she had gotten him to take part in. Satou can also become obsessed very easily, not only with the aforementioned MMORPG, but also with gal games thanks to Yamazaki's influence, which repeatedly proves his undoing.

Despite clearly having feelings for Misaki, Satou ultimately ends up rejecting her contract that will bind them forever as a couple, wanting to protect her from his condition and believing that she deserves someone much better than he is. This shows him to be a very selfless person, perhaps to a fault, as he does this out of a belief that it's right even if it means he returns to being a hikkikomori. After his allowance from his parents is cut off completely, Satou grows to realise he has to leave his lifestyle, and ultimately goes out and gets a job. He also reflects that up until then, he had been quite privileged since he had been supplied with all he needed without having to work, and it's only now that he realises how lucky he's been. 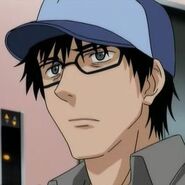 Satou and Yamazaki
Add a photo to this gallery
Retrieved from "https://hero.fandom.com/wiki/Tatsuhiro_Satou?oldid=1778353"
Community content is available under CC-BY-SA unless otherwise noted.