Specializes in combat and assassination

Hanging out with his sister Miyuki

Tatsuya Shiba is a First Year Student in Course 2 of the First High School. He is the eldest son of Four Leaves Technology (FLT) company's president, part of the Yotsuba clan. His only sibling is Miyuki Shiba. Since he was born in April and Miyuki born in March, they are studying in the same year according to Japanese school system. Miyuki scores at the top of the class of freshmen, while Tatsuya scores near the bottom in the technical skills portion. The school is split between the high scoring students, blooms, and the low scoring students, weeds.


Tatsuya appears to have a very cold personality except when it comes to his sister. It is later revealed that Tatsuya is "'half' of Taurus Silver" who is considered as an ingenius CAD Engineer, while the "Taurus" part came from Ushiyama, who Tatsuya calls Mr. Taurus. It is also stated that this is done because Tatsuya is "still an underage student", so he couldn't patent his own theories. He was born without any magical ability apart from decomposition and regrowth, which was unacceptable to the Yotsuba clan. In hopes that his magical abilities would improve, his mother, Shiba Miya and her twin sister, his aunt, Yotsuba Maya, experimented on the six-year old Tatsuya. Miya used the forbidden Outer-Systematic Magic "Mental Design Interference," forcibly altering the area in the consciousness that creates strong emotions, called the limbic system, by inputting an Artifical Magic Calculation Area, creating an artificial Magician.
Tatsuya was granted the ability to wield magic, but still not par to what they expected. Unfortunately, the artificial magic operation area is markedly inferior in performance to that of a natural one, and he could only end up being used as a Guardian. He is also part of the JSDF 101 Independent Magic-Equipped Battalion, a highly elite magical fighting force, despite being in high school. He wields several personal magics, Gram Dispersion, Mist Dispersion, Regrowth, and Material Burst(Strategic Class Magic). He uses Material Burst three times so far, once in anger when the Great Asian Alliance invaded Okinawa in 2092, and twice during Scorched Halloween three years later.

Tatsuya is 172.9 cm tall (178.8 cm in Volume 3), well-built and often described as mundane-looking compared to other characters in the series. He's also described through other characters' impressions as serious and competent-looking.

He is usually expressionless and very rarely does he get surprised or enthusiastic, and whenever he does, however, it's often at the minimum level. In the anime, he has dark hair that reaches his clear blue eyes in several unevenly cut bangs — he shares only his eye color with his sister Miyuki.

Tatsuya is normally wearing his green, white, and black school uniform, lacking the eight-petaled flower emblem on his blazer during his first year. At home, he generally wears a nondescript black shirt and pants.

Tatsuya is intelligent and analytical. His emotions are merely skewed in a certain direction, with one particular half becoming especially sensitive. Thanks to this, he can easily and quickly categorize people into two distinctive groups: hostile and non-hostile (while normal people would see 3 types: hostile, neutral and friendly. They would have a hard time to know who is a friend and who is an enemy since they aren't sensitive). This certainly comes in handy for his military and political life and anything related to conflicts (which is almost everything in life).

The only aspect in him that is perfectly natural — the only emotion that remains — is his love for his sister. Because of this, he tends to either spoil her too much, or be overprotective and completely ruthless when there are threats towards Miyuki's safety. For him, his world revolves around Miyuki and he loves her dearly. In the eyes of their friends, Tatsuya exhibits blatant favoritism towards his sister, and hence is called a siscon.

2. Specializes in combat and assassinations, especially in long-ranged combat.

Miyuki, as a natural Mental Interference Magician, acts as his limiter. This stops him from showing his true might, making him unable to use his Strategic spell and blocking his access to his psion reserves. When the limiters are released, he is surrounded by a maelstrom of psions that would cause anyone to lurch away from him; an amount greater than his sister's and major top tier magicians. The limiter also limits his ability to use his natural magics.

As for Miyuki, while she is limiting her brother, her magic territory is also sealed as half of her Magic Power is used to seal her brother's power. This causes her magic to escape her control, causing her to accidentally lower the temperature in the room whenever she is upset.

A large caliber rifle for Material Burst, a mass to energy conversion process.

Bulletproof, heat resistant, shock resistant, and also resistant to biological and chemical weapons and a simple motion supplement system. The Flying Device was also attached to the belt. When coupled with the shock resistant function, it can completely nullify the recoil when firing, so he can also fire in the air. 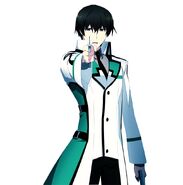 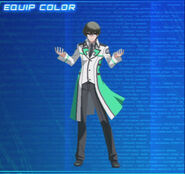 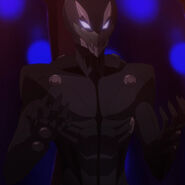 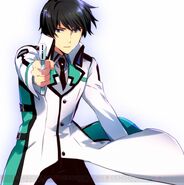 Retrieved from "https://hero.fandom.com/wiki/Tatsuya_Shiba?oldid=1770250"
Community content is available under CC-BY-SA unless otherwise noted.