Captain of the Elven Guard of Thranduil's Woodland Realm

Hunting the dark creatures of Middle-earth.

Save Kíli before he dies from a poisoned arrow (succeeded).

Protect the dwarves from the Battle of the Five Armies, especially Kíli (partially succeeded).
Avenge the death of her parents.

Tauriel is a major protagonist from The Hobbit trilogy, and the love interest of Kíli.

She is played by Evangeline Lilly, who also portrays Hope van Dyne in the Marvel Cinematic Universe.

Not much is known about her past the only thing that is known is her parents death. Tauriel had become an orphan after that she was taken in by Thranduil who raised her she was younger than most elves in Middle-earth. She grew up with the kings son Legolas the elf prince who she would have feelings for.

Because she was born in Mirkwood and spent most of her youth in the forest she was given the name Tauriel meaning "daughter of the woods" and "forest maiden". After the death of her parents and before becoming leader of the Woodland Realm guards, Tauriel trained for the future to defend herself from the dark forces that killed her parents and to stop their evil.

Tauriel is the chief of the Elven King Thranduil's guards. She helps the Dwarves on the quest to find the treasure of Smaug, the terrible dragon, and falls in love with one of the members of Thorin Oakenshield's dwarf company, Kíli, and one of her main goals is to avenge the deaths of her parents, who have been taken by Orcs.

Tauriel is captain of the guards she was trained in the wood elves military but she is also a huntress. She sees the growing evil in Middle-earth and doesn't want to hide away from it like King Thranduil.

Tauriel gets upset with Thranduil when he orders her to only keep the spiders out of his kingdom and not to destroy them at the source of the problem Dol Guldur. She also gets upset when he forbids her to fall in love with his son and when he refuses to the dwarves.

She was sanded by the death of her parents when she was young this is what leads her to kill the spiders, orcs, and the rest of the evil creatures. This action also leads her to protect her love Kíli she doesn't want the orcs to take away another person she cares about.

When Thorin's Company arrive in Thranduil's kingdom of Mirkwood while attempting to reach the Lonely Mountain, they had entered a battle with the giant bloody thirsty spiders. Tauriel arrived and saved a dwarf, Kíli, from one of them before the elves captured the company and imprisoned them in Thranduil's dungeons. Tauriel approached Kíli and asked him of a runestone in his hand. At first, he made a joke saying that it was a talisman that curses all, then he said it was just a runestone that his mother had given him so that he'd remember his promise to come back to her. Tauriel and Kíli bonded as they talked some more.

Later, a member of the company that the elves did not manage to capture: the hobbit named Bilbo Baggins. He sneaked into the palace and stole the keys to the dungeons and freed the dwarves and led them out. As they were escaping with the elves hot on their trail, the orcs arrived and attacked, entering a massive battle with Thranduil's elves and the dwarves. Kíli was shot in the leg with an arrow fired by the leader of the orc pack, Bolg. Tauriel arrived and saved his neck a second time before the dwarves escaped from Mirkwood and eventually made it to Esgaroth in order to reach Erebor, but with the orcs following suit to kill.

Tauriel left the kingdom and persuaded Legolas to help her fight the evil that had returned to their lands and save the dwarves. An amount of time later, Tauriel prevents the orcs from attacking Esgaroth and while Legolas forces them to retreat, she tends to a dying Kíli, using elvish medicine. The two later acknowledge their love for each other. But before anything else, the dwarves had unwillingly awakened Smaug the Dragon, who was now headed for Esgaroth, Lake-town, intending to destroy it for helping the dwarves reach the mountain.

Tauriel, along with the four dwarves that were left behind by the company and Bard the Bowman's children, evacuated the city along with many of the citizens of Lake-town as Smaug unleashed his fiery rampage of destruction upon the city while Bard has escaped capture from the corrupt government of the town, had grabbed his bow and some normal arrows and fended off the dragon with them, attempting to kill him with them, but to no avail, much to Tauriel's fear of the dragon being indestructible. But Bain, Bard's son, gave Bard a black arrow (the only thing to pierce the dragon's hide) and Bard fired it into Smaug's weak spot, finally killing him as Bard and the people of Lake-town fled to the surface.

As Bard led the people of Esgaroth to safety, the dwarves swam back to the mountain, but not before Kíli gave Tauriel his runestone, promising her that he'll come back to her as she leaves with Legolas. Legolas tells Tauriel all about the orcs and that they are an ancient enemy of Gundabad orcs from Gundabad. They both leave to investigate while Thranduil arrives at Erebor as well with his armies of elves.

Tauriel and Legolas arrive at Gundabad and keep watch until nightfall, when the orcs, led by Bolg, along with bred-for-war bats left for Erebor to join the upcoming battle. During the battle, the next day, Legolas and Tauriel arrive and they warn the wizard, Gandalf about the second army of orcs heading in from the north about to overrun the four dwarves up on Ravenhill, Thorin, Fili, Kíli and Dwalin. When Gandalf attempts to persuade Thranduil to help warn the dwarves of the second army about to arrive, but to no avail, Bilbo runs to Ravenhill instead to warn them.

As Thranduil is leaving the battle, Tauriel stops him and tells him that he will not turn away from the slaughtering of the dwarves and raises her weapons against him, claiming that there "is no love in you". Thranduil responds by slicing her bow in half and claiming that her feelings toward Kíli "is not real" and is about to kill her for it when Legolas stops him and he and Tauriel leave to aid the dwarves themselves.

As they arrive, they fend off the second army and Kíli saves Tauriel from Bolg, but is killed in the process, much to Tauriel's grief. Antagonized, she grabs Bolg and throws him over the edge of a cliffside but he takes her with him and is about to kill her when Legolas arrives and saves her and kills Bolg, avenging Kíli. After the battle, Tauriel mourns Kíli as Thranduil arrives and expresses his sorrow for her pain. When she asks why love hurts so much and Thranduil rephrases what he told her earlier: because their love is real.

Little is known about what happened to Tauriel afterward. 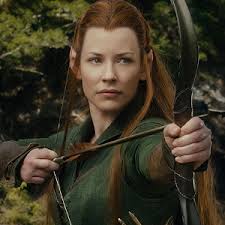 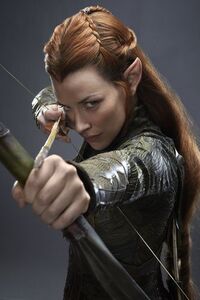 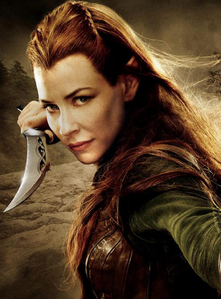 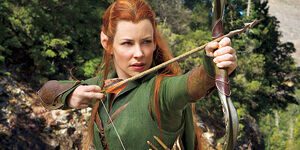 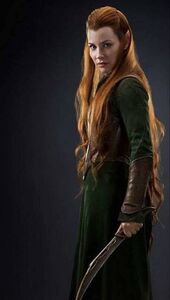 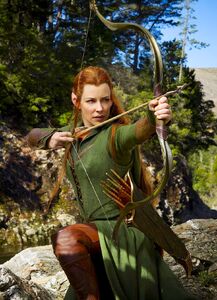 Evangeline Lilly as Tauriel - The Archer 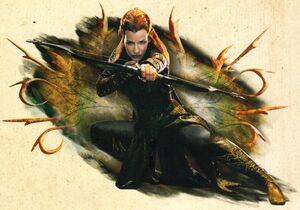 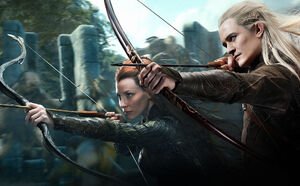 Evangeline Lilly as Tauriel and Legolas 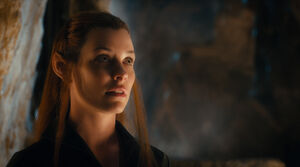 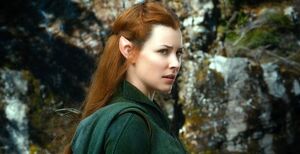 Tauriel - The Desolation of Smaug 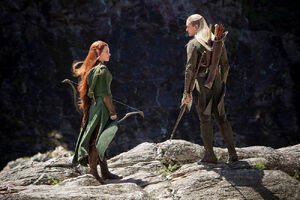