Princess of the Vapra Clan

To end the Skeksis' evil rule over Thra

Tavra is one of the tritagonists in the 2019 Netflix series, The Dark Crystal: Age of Resistance. She is the Paladin warrior who is the second-born daughter of All-Maudra Mayrin and the middle sister of Seladon and Brea.

She is performed by Neil Sterenberg, with Catriona Balfe providing her voice.

Tavra acts as the peacekeeper and voice of reason between her two feuding sisters, Seladon and Brea, who are both very stubborn. She is willing to lend an ear, taking her sisters' complaints at heart and trying to make them feel better by giving them advice.

In contrast to her sisters who are both very similar to each other; the same stubborness, strong-willed, quick to anger, and always ready to speak their mind, Tavra is is much more stoic and pensive, and stays quiet when hearing her sisters' complaints at heart.

Tavra is the middle-daughter of Mayrin, the Maudra of the Vapra Clan and All-Maudra to all Gelflings, and sister to Seladon and Brea. Of the three sisters, Tavra was the most adventurous and became a skilled swordswoman. She often acted as the peace-keeper between Seladon and Brea, who developed a sibling rivalry due to Seladon feeling pressured at being the next All-Maudra one day.

At one point in her life, Tavra wished to journey with the Sifa Clan with her lover, Onica. Together, the two kept a secret relationship, as Tavra knew her mother would never approve of her romance with someone outside of the Vapra clan. However, Tavra's sisterly and royal duties prevented her from traveling.

One day, Tavra came to fetch Brea from her usual spot, the Library, and informed her younger sister that she was allowed to attend the tithing ceremony, which delighted Brea. However, during the tithing ceremony, Brea was absolutely disgusted by how SkekOk manipulated a farmer and his wife to give up one of their treasured possessions. Tavra solemnly told her sister that was the way things were, showing her distaste in how the Skeksis treated other Gelfling. Later on, after Brea wiped out Elder Cadia's memory and Mayrin chastising her before sending the princess to the Order of Lesser Service, Tavra was then assigned to alleviate the angry Sifans.

Afterwards, she is then sent on another mission, this time to hunt down Rian for allegedly murdering his girlfriend Mira, a member of the Vapra clan. En route, Tavra found Brea after she ran away from the Order of Lesser Service, and supported her decision, saying that Seladon and Brea are alike in their stubbornness but that their sisterly bond could never be broken. She then continued on, eventually catching up with Rian in a Podling bar while he is also sought after by Naia and Kylan. She intends to take him to Ha'rar but Rian convinced her and the others to dreamfast with him to learn the truth. Tavra learned that the Skeksis had killed Mira by draining her essence. Ordon had also joined the dreamfasting as well. She goes with Naia and Kylan to save Gurjin from the castle while Rian and Ordon went to Ha'rar and agreeing to meet in Ha'rar.

When they get to the castle Tavra departs from Naia and Kylan, telling them to find Gurjin and go to Ha'rar, where her mother will grant them safe passage through their kingdom as she followed Emperor SkekSo. Tavra stumbled upon him channeling the Darkening in his Sceptor but she quickly hid away before he could spot her.

Tavra was eventually captured by the Skeksis and thrown into their dungeons. However, after SkekSo and SkekVar consulted with the Arathim in a deal, the latter was tasked to bring the strongest Gelfling as a host to them; he chose Tavra after she stood up against him in the cells. SkekVar then brought her to Stone-in-the-Wood, where she unleashed a horde of Threaders upon the Stonewood army, who are attempting to overthrow the Skeksis. When Brea and Seladon were imprisoned, the Ascendancy mocked them, speaking through Tavra, saying the age of the Gelfling had come to an end.

She then later strapped Brea in to be drained, ignoring her pleas, along with Seladon and Maudra Fara, though released all three of them after Aughra made a deal with SkekSo to release the Gelfling in exchange for her essence. Returning to herself, Tavra told Brea and Seladon of the alliance between Arathim and Gelfling, but because Tavra had been merged too long she could no longer leave the hive mind; despite this, she accepted it contentedly and helped lead the Gelfling out of the Castle of the Crystal via the catacombs. However, Tavra and the others were cornered by SkekVar and SkekLach trying to prevent them from leaving; she engaged into a duel with the former, stabbing him and sought to kill him in vengeance for Mayrin's death, but was run through by skekSil before she could.

Gravely wounded, Tavra was found by Brea and Seladon and carried her out. She eventually succumbed to her wounds and died as Tavra spoke to her sisters for the last time, bringing their hands together.

Tavra and her sisters bowing down to the Skeksis. 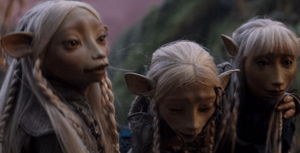 A weakened Tavra being carried by both Brea and Seladon. 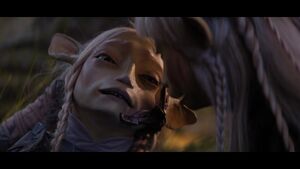 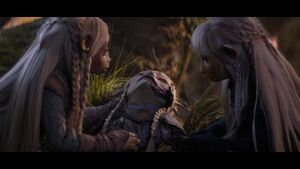 Tavra's body and essence returning to Thra, thanks to her sisters