Demon of earth and fire (formerly)

Retrieving the heart of Te Fiti.

Spread life across the ocean

Elemental Deity
Te Fiti is the overarching protagonist of Disney's 2016 animated feature film Moana. She was the goddess of life and the creation of it and, after her heart had been stolen by the demigod Maui, she became Te Kā , a demon manifested of fire and magma, who served as the main antagonist of the film. With Te Kā in her place, the world that Te Fiti created is slowly consumed by a life-killing darkness. Restoring Te Fiti's heart and stopping the darkness serves as the driving conflict of the film.

Te Fiti was the first entity to appear in the world inhabited only by the ocean. As an all-powerful goddess, Te Fiti used her life-giving heart to spread the gift of life across the world, creating multiple islands that would be inhabited by flora, fauna, and humans. Following her vast creation, Te Fiti laid herself to rest and formed her body into an island. Over the time, Te Fiti's heart became a much-desired treasure. Villainous thieves such as the giant crab Tamatoa and bloodthirsty Kakamora pirates all sought the heart for their own nefarious purposes and self-interests. Only the mischievous and highly-praised demigod Maui was daring enough to invade Te Fiti's shores in hopes of giving her heart to mortals as a gift. Using his shapeshifting abilities, Maui found Te Fiti's spiral and stole the heart. As a result of its removal, the island fell into darkness, and the physical entity of Te Fiti morphed into a demonic shell of her former self: Te Kā.

As Maui made a hasty escape on his boat, a vengeful Te Kā rose from her cloud and confronted the demigod. Their battle resulted in the loss of the heart, and as punishment for his crimes, Te Kā banished Maui to a desolate spit of land in the middle of the open ocean, where he would be doomed to remain stranded for eternity. Meanwhile, with Te Fiti now a dark entity, a devastating curse would slowly begin to spread across the world, destroying flora and fauna, and making it impossible for humanity to survive. According to legend, only the restoration of Te Fiti's heart can save the other corners of the world from falling into darkness, as well.

Te Fiti's sole purpose is to spread life across the ocean. She values nature and the beauty that comes alongside it. Moving with gentle grace, often seen with a tranquil expression to match her radiant features, Te Fiti is selflessness and purity incarnate. Though she will not hide her displeasure in those who wrong her, she is forgiving should the individual in question look to redeem themselves.

While Te Fiti is a largely compassionate entity, Te Kā is - quite literally - a heartless creature with a fiery disposition. The theft of her heart has stripped her of Te Fiti's benevolence, replacing it with malice aimed at both Maui and the world at large. Te Kā and Te Fiti are polar opposites, with differing goals and ideals; while Te Fiti wishes to spread life and beauty, Te Kā seeks to bring death and corruption. As she guards Te Fiti's fallen shores with a spiteful scowl, Te Kā looks to destroy anyone who dares cross her path, and will relentlessly pursue her target until they either depart, or face a bitter end.

Despite this, Te Fiti's purity lies deep within Te Kā. Should someone call to it, as Moana did during the climax, she will slowly ease her tension and succumb to her inner, gentle nature.

Te Fiti, as well as her Te Kā aspect, is an enormous embodiment of the earth, but her appearance differs between the two forms.

The colossal Te Fiti takes the form of a feminine figure with a human face not unlike Moana's. Her body is covered in lush flora and trees; clusters of flowers adorn her grassy hair similar to a headdress. Her entire body appears to be made of the land itself, with a flowing "dress" made of plants and flora. She can also assume an island form when dormant; when this happens, she assumes a resting position.

Massive in size, Te Kā towers above all who encounter her, and is usually depicted with a hollow scowl and an expressionless, skull-like face. She is comprised completely out of lava, with molten skin and flames as her hair. Always surrounding her slender form is a dense pyrocumulus cloud, coupled with bolts of lightning and volcanic ash. She has no legs, her lower half made of a shapeless mass of lava, and she moves about by crawling with her hands. On her chest is a spiral carving of where her heart once was; should it be reattached, Te Kā will return to her true form.

Te Fiti's power lies in her ability to generate life around her and her control over it as a goddess of life. As a living island, she can grow plants of all sizes and can manipulate the terrain around her body, as well as change size seen just before she returns to a dormant state near the end of the film. With her heart, she can create other islands teeming with flora and fauna, and affect these elements from afar, as shown by Te Kā's curse. However, she could also rejuvenate the life in islands Te Kā's curse had once affected. Because of her godly status, she was also able to create and recreate items previously destroyed, such as Moana's boat and Maui's fish hook (which itself was a weapon forged by the gods).

As Te Kā, most of her abilities are derived from her elemental control over fire, lava, and magma. With these assets, she can create fireballs and turn matter into molten rock. Aside from water, which can temporarily turn her lava form into molten rock, Te Kā does not appear to have any true weaknesses. The only way to truly "defeat" her is to subdue her long enough to return Te Fiti's heart to its rightful place. This will inevitably obliterate the being known as Te Kā, and revive her true identity.

She is also extremely powerful in her strength—so much so that she overpowers the capacity of a demigod, though one can pose as a decent adversary for a period of time.

Te Fiti is first seen in traditional animation during Gramma Tala's opening story. She tells the surrounding children about the day in which Maui stole Te Fiti's heart, and warns that it must be restored before humanity faces a slow and painful death at the hands of the lava demon Te Kā. Shortly afterward, the Ocean selects Tala's granddaughter, Moana, as the heroine capable of saving the world.

Years later, Moana journeys with Maui to Te Fiti's island, which has been covered entirely by molten rock. Te Kā acts as a demonic guardian and prevents anyone from approaching Te Fiti's shores. Fortunately, Moana manages to do so, but she finds that Te Fiti is nowhere to be found. She looks to Te Kā and notices a spiral on the lava goddess' chest, indicating that she is actually Te Fiti. Moana sings "Know Who You Are" to Te Kā, which in turn reforms the beast as she at long last finds a measure of peace in Moana's words. Moana gently rests her forehead on the bridge of Te Kā's face before placing the heart back into her chest. Te Kā transforming back into Te Fiti. Te Kā's lava skin turns to molten rock and crumbles away, releasing Te Fiti from her age-long torment. Te Fiti silently restores her island and undoes the damage caused by Te Kā across the world, as well as Moana's boat. Maui bashfully tries to joke with Te Fiti, but the goddess is not amused. He then apologizes in a formal matter, confessing that he has no excuse, which earns Te Fiti's forgiveness. As a reward for helping Moana restore the heart, Te Fiti recreates Maui's fishhook, which had been previously destroyed by Te Kā. She then bids farewell to Moana and lays herself down to rest as the heroine returns home. 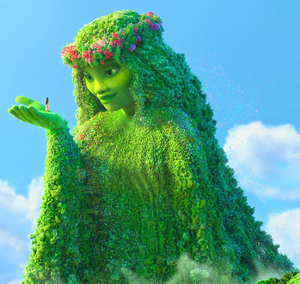 Te Kā cooling into molten rock in front of Moana.

Te Fiti forgives Maui
Add a photo to this gallery

Retrieved from "https://hero.fandom.com/wiki/Te_Fiti?oldid=2200503"
Community content is available under CC-BY-SA unless otherwise noted.