G.U.N. (Their Commander)
Shadow the Hedgehog (on Sonic'06 beyond)
Rouge the Bat (On Sonic Heroes)

Complete orders from G.U.N (from Sonic'06) (both succeeded)

Anti-Heroic Organization Team
Team Dark is one of the four teams from Sonic Heroes, alongside Team Sonic, Team Rose and Team Chaotix. Its members are Shadow the Hedgehog (speed type), Rouge the Bat (flight type) and E-123 Omega (power type), with Rouge being the de-facto leader throughout Sonic Heroes and Sonic Free Riders, and Shadow taking the lead in Sonic the Hedgehog(2006). Team Dark's gameplay was meant to be the most difficult and action-packed in the game.

Shadow is the leader of the team during Sonic'06 and probably until recently. He made his debut on Sonic Adventure 2. He can run almost as fast as Sonic, only probably slightly slower, and probably is slightly stronger as well. He can do almost everything Sonic can and has chaos powers, which he can use to do a Chaos Blast or teleport. Shadow has a isolated personality, but Rouge and Omega make a good company for him. Even if it doesn't look like it, he fights for the good and for the sake of the world, remembering the promise he made for Maria.

Rouge was the leader of the team during Sonic Heroes and Free Riders and still is a good member of it. Like Shadow, She made her debut on Sonic Adventure 2. She is a expert at stealth and a great treasure hunter. She can glide, fly and climb walls. She works for the President and G.U.N, along with Shadow and Omega and does missions for them.

Omega is a valuable member of the team. He made his debut on Sonic Heroes. He can shoot missiles and is very strong, so he can break walls and obstacules Shadow and Rouge can't break. He also can glide as well. Omega used to be loyal to Eggman, but then he began to hate him because he trapped him guarding Shadow. Now he wants to destroy all of his robots. Because of the times he spend together with them, Omega developed a bond with Shadow and Rouge.

Metal Sonic disguised as a E-10000 robot during Sonic Free Riders and joined Team Dark. During the races against the other teams, he copied their racer data to challenge Sonic into a race and prove he's the best. Metal Sonic then revealed himself against the Heroes but he was defeated by Sonic on a race, even though his efforts.

Though the Team was not necessarily the Team Dark we have today, Shadow and Rouge worked alongside Eggman during Sonic Adventure 2, helping him with his plans. But, recently they are enemies, even more because Omega hates him. 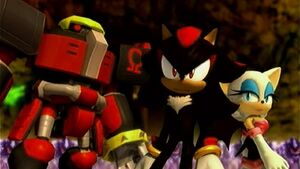 Team Dark VS. a horde of Mephiles clones.