Team Instinct (Japanese: チームインスティンクト Team Instinct) is a heroic faction in Pokémon GO. It's one of the three available teams that the player can pick to be a member of. Team Instinct's leader is the positive Spark.

Rivalry with Valor and Mystic

Team Instinct isn't the only available team the player can choose. The player can also choose between Team Mystic or Team Valor. These three teams works as the players allies in battle. For when the player chooses a team, the player is taking gyms for that team. Instinct is in an endless battle with Mystic and Valor about gym control. Even though the three teams are enemies, they all still unite to take down the evil Team GO Rocket. Team Instinct is and has always been the least popular team out of all three. They get a bad reputation for being so unpopular and that they never control gyms. 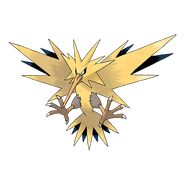