Team RWBY (pronounced "Ruby") is a team of Huntresses formerly stationed at Beacon Academy, which is comprised of the main protagonists: Ruby Rose, Weiss Schnee, Blake Belladonna, and Yang Xiao Long. The first battle with the four members fighting together takes place in Episode 8, though it is before the team's official formation. The team was later formed in the same episode. During initiation, the team chose to bring back the White Knight pieces.

After gaining the attention of Ozpin, the headmaster of Beacon, Ruby is allowed to skip the two required years at Signal Academy and enroll early, allowing her to participate in first-year team formations, along with her elder sister. Weiss and Ruby become partners in "The First Step, Pt.2", while Yang and Blake become partners in The Emerald Forest.

The first battle with all four members fighting together takes place in "Players and Pieces", when they all band together to take down a massive Nevermore. During the Beacon Academy Initiation, the team brings back the two White Knight pieces and are officially named "Team RWBY" with Ruby Rose appointed as the team's leader.

Despite being first years students, Team RWBY became involved in foiling the plans of Roman Torchwick and the White Fang, stopping a cargo robbery in the end of Volume 1 and a Grimm invasion in Vale in Volume 2. Some time afterward, they qualify for the Vytal Festival Tournament. They manage to reach the finals but are later disqualified by General James Ironwood after Yang allegedly broke the leg of her opponent, Mercury Black.

After the broadcast of Penny Polendina's death through the manipulations of Cinder Fall, Beacon Academy falls to both the White Fang and the Grimm attracted to the negativity. Split up, the team tries it's best to defend their school, only for Yang and Blake to be gravely injured during an encounter with Blake's former partner and Ruby's latent power to knock her unconscious.

After the Fall of Beacon, the team completely splits up, with Weiss returning to Atlas with her father, Blake running away to Menagerie, Yang recovering in Patch and Ruby going to Haven with Jaune Arc, Nora Valkyrie and Lie Ren, spurred by her uncle's warning that another incident like the Fall of Beacon could occur in Haven.

Eventually, Blake regains the courage and willpower to confront the White Fang, After an encounter with Tyrian Callows, one of the members of Salem's Inner Circle, Team RNJR are joined by Qrow, who reveals the leader of the Grimm, Salem's ultimate goal. Weiss masters the Summoning aspect of her Semblance and Yang recovers enough to use a brand new prosthetic arm. Volume 4 ends with Yang seeking out Ruby, Weiss escaping Atlas to find her sister, Winter and Blake attempting to spur the people of Menagerie to restore the original intentions of the White Fang.

In Volume 5, Ruby, Nora, Jaune, Ren and Qrow finally reach Haven Academy and soon encounter Oscar Pine, the current incarnation of Ozpin and begin to help him train in combat, as Qrow tries to recruit Huntsman for a mission to rescue the Spring Maiden from Raven Branwen. The latter manages to capture Weiss after a Grimm attack causes her cargo ship to crash and decides to ransom her back to Atlas. Coincidentally, Yang arrives soon after and demands Raven to open a portal to her uncle, in order to reach Ruby in Haven and arrives discovers her captured teammate. After some parting words about Ozpin and Salem, Raven allows them to leave through a portal, reuniting Weiss, Yang and Ruby. Weiss and Yang decide to join Ruby on her quest to prevent the fall of Haven. During an ambush set up by Leonardo Lionheart, the White Fang are countered by forces from Menagerie, led by the Belladonnas. With the Relic of Knowledge secured by Yang and Haven safe from immediate threat, the team, now fully reunited, head with Qrow, Oscar and team JNR towards Atlas.

Team RWBY, JNR, Qrow and Oscar take a train to the port of Argus, hoping that their Atlas military base is active and that someone will be able to take them Atlas. However, the now-exposed Relic draws in a swarm of Grimm. Unwilling to put civilians in harm's way, team RWBY, Oscar and Qrow stay behind to finish the Grimm off, with Jaune, Nora and Lie going on ahead. The train ends up crashing off the tracks and the group adds a new member to their party: Maria Calavera. Stranded in the cold and desperate to know the truth, Ruby uses the Relic's second question to find out what Ozpin is hiding, causing Jinn, the spirit of the Relic, to reveal the original incarnation of Ozpin, known as Ozma and Salem, were once romantically involved, until Salem's unwillingness to let Ozma go caused her to gain immortality, cause the gods to leave and lastly, a desire for destruction and a goal to secure all four relics, which would usher the end of the world. Most importantly however, everyone learns that Salem ultimately cannot be killed. With dwindling hope and motivation, the party finds shelter in the abandoned Brunswick Farms during a snowstorm, where the hidden pack of Apathy, a Grimm that drains willpower, nearly finishes them off, only for Ruby to consciously use her Silver Eyes to destroy them.

The team presses on and finally reaches the port city of Argus, reuniting with JNR. However, their attempts at being provided transportation are blocked by the resident military, forcing them to steal an airship. During their airship heist, Caroline Cordovin activates a massive Colossus to blow their ship out of the skies, coinciding with Adam Taurus making his move against Blake, but ultimately being foiled by Yang's timely arrival. After the Colossus is finally taken down, reports start to come in of a massive Grimm army closing in on Argus, aided by a Leviathan Grimm that rips through the shields. Wanting to help, Ruby uses Maria's advice on using the light inside of her to help stop the Grimm and the group is allowed to leave on their airship. Upon closing in on Atlas, everyone is surprised to see the Atlas military air support almost seemingly anticipating their arrival and they are waved in.

In an attempt to find information on what was happening in Atlas, Team RWBY, JNR, Qrow, Oscar, and Maria make an unauthorized landing in Mantle. While in the city, the group is led to Pietro Polendina's Pharmacy by Maria. After a brief meeting with Pietro, the team ran outside to fight off the Grimm that were attacking the city, which leads them to a reunion with Penny, who was rebuilt by Pietro. Shortly after the reunion, the team and their party were arrested and taken to Atlas by the Ace-Ops.

After arriving at Atlas and encountering Penny, Winter and Ironwood, the team is led into the latter's office, where he presents his plan to create the Amity Communications Tower and then, upon establishing global communication, reveal Salem to Remnant, something which he already did with Winter, Penny and the Ace-Ops.

Team RWBY, JNR, and the Ace-Ops secure an Abandoned SDC mine which will be used as the Amity launch site. After completing the mission, Ironwood official graduates the team, giving them their Huntress licenses and allows them to both help with the Amity Project and take formal missions around the kingdom.

Upon receiving a formal dinner invitation from Jacques Schnee, the team plots to sneak Weiss past her brother to go through his office. With the help of Willow Schnee's private security cameras, Weiss exposes her father and has him arrested, just as Mantle's security is overridden and the heating is shut off by Arthur Watts, causing riots and a Grimm infiltration. Working alongside the Ace-Ops, the team defends Mantle against the onslaught and later helps with civilian evacuations when Ironwood reveals both the intention behind the Dust shortage and Salem.

Despite their joint success, the team and Ironwood's Ace-Ops clash when Ironwood deems them untrustworthy and decides to take a new course of action: claim the Staff of Creation by having Winter Schnee become the new Winter Maiden and raise Atlas itself high into the atmosphere, a plan that would leave Mantle at the mercy of a massive invasion. Ruby is only barely able to warn the others before Ironwood shuts off communications and orders their arrest, leading to a fight between the Ace Ops and Team RWBY. After the former's defeat, Ruby and Weiss hurry to find the Winter Maiden to stop Ironwood, while Blake and Yang search for Oscar and Team JNR. In the process, Ruby and Weiss encounter Penny, Winter and Cinder just as Penny claims the Winter Maidens power and Ruby forces Cinder to flee through her silver eyes. Unwilling to help Ironwood claim the Staff, Penny departs with Ruby and Weiss on a Manta, pondering their next move just as Salem herself, leading a massive army, descends on Atlas.

Shortly after their escape from Atlas, the group splits after a disagreement between Ruby and Yang on how to approach the threat of Salem. Weiss, Blake, Nora and Penny team with Ruby, while Jaune, Ren and Oscar side with Yang - both teams work with the Happy Huntresses.

Ruby's group, joined by May Marigold, plans to deliver a broadcast to the entire world through the Amity Communications Tower, partially succeeding in warning them of the threats to come. They are later attacked by The Hound at the Schnee Manor.

Yang's group plans to aid the citizens of Mantle on a smaller scale, however, after Oscar Pine is kidnapped by the Hound, they refocus their efforts into rescuing him. After an encounter with Salem and being aided by Emerald Sustrai and Hazel Rainart, Emerald joins the group as Hazel sacrifices himself to buy them time to escape.

The team reunites at the Schnee Manor, where Team RWBY is once again reformed in order to take the Relic of Creation, as well as all the citizens of Mantle and Atlas, to the kingdom of Vacuo where they could temporarily be safe from Ironwood and Salem. Durning the process, Team RWBY ask Ambrosius, the Staff's spirit, to make Penny human to rid her of a virus implanted in her system by Watts. Unfortunately, Cinder and Neopolitan ambushes the team, Penny and Jaune. During the fight, Yang sacrifices herself to save her sister from a vengeful Neo's attack and falls into the void. Ruby and Blake soon fall into as well after Cinder cuts Gambol Shroud's line. Finally, Weiss falls as well when Cinder causes the ground underneath to collapse. 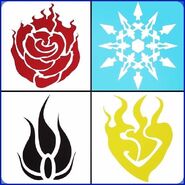