Stop Eggman from conquering the world (most of the time)

Team Sonic (or Team Heroes) is one of the four teams in Sonic Heroes, along with Team Dark, Team Rose and Team Chaotix. The members are Sonic the Hedgehog (speed type), Miles "Tails" Prower (flying type) and Knuckles the Echidna (power type).

Sonic, Tails and Knuckles are the playable characters in this game.

While Sonic and Tails are collecting the Chaos Emerald while trying to stop Eggman, Knuckles is once again duped by Eggman, but this time, he is duped into thinking that Sonic wants to steal the shards of the Master Emerald from him. He fights against Sonic and Tails, but the three end up losing the Chaos Emerald, which are given by Eggman to a water monster named "Chaos". The three team up once again to fight against Chaos, but after this, Sonic and Tails chase the Egg Carrier while Knuckles stays behind.

In the last story, Tails and Knuckles, along with Amy and Big, support Sonic as he fights against Perfect Chaos (Chaos will all seven Chaos Emeralds). They watch Sonic sprint into the distance just before the end credits.

Out of the six playable characters, Team Sonic are playable in the Hero Story, and are bosses in the Dark Story.

Sonic escapes from G.U.N, going through City Escape, but gets caught again. Meanwhile, Knuckles searches after the shards of the Master Emerald in Wild Canyon. Tails arrives at the Island where Sonic is kept and goes through Prison Lane to save him, not before fighting against Eggman. Sonic escapes the Island, and encounters a black hedgehog named Shadow in the forest. After escaping the forest, Sonic, Tails and Amy watch Eggman as he blasts the moon. Later, Tails and Amy meet Knuckles and Tails chases the President's limo in Route 101 before flying into Eggman's pyramid base. The team then infiltrate the pyramid, with Knuckles searching for the keys in Death Chamber to open a gate so that the heroes would procceed further, encountering King Boom Boo on the way. After Sonic defeats the Egg Golem in the pyramid, the team arrive at the ARK in space. Knuckles encounters a beautiful female bat named Rouge in Meteor Herd, after finding the last shards, and he saves her from falling to her death after they fight. Tails fights Eggman again after thinking that the latter killed Sonic, wanting to avenge him. Sonic, revealed to have survived due to holding Tails's fake emerald and using Chaos Control, encounters Shadow once again and the two fight on their way to the cannon.

Team Sonic are one of the four playble teams, the others being Team Rose, Team Dark and Team Chaotix.

On the Mario & Sonic series, Team Sonic was expanded to have every character on the game that was from the Sonic's series on it.

Sonic is the leader of the team. He made his debut in the 1991 game Sonic the Hedgehog. He can run very fast, and, can do several things, like Homing Attack, Boost or Spin Dash. He is loyal to his friends and has a good sense of justice.

Miles Prower, more commonly known as Tails, is one of the members of the team. He made his debut in the 1992 game Sonic the Hedgehog 2. He can fly and, since Sonic the Hedgehog 3, he can pick up other characters, such as Sonic, Knuckles, or even both of them at the same time. Tails can also attack with his twin Tails and throw dummy rings. Tails likes to help Sonic and sees him as a role model. He is good friends with Knuckles, too.

Knuckles is one of the members of the team. He made his debut in the 1994 game Sonic the Hedgehog 3. He can glide, climb and break walls which Sonic and\or Tails can't break, due to his strength. He is also a great treasure hunter. Knuckles is the guardian of the Master Emerald and didn't use to leave his island very much, but when the world is on danger or if his friends need him, he always will be there to help.

Amy has her own team: Team Rose, but she works alongside Team Sonic on noticeable times, like in Sonic Adventure 2 and in Sonic Riders: Zero Gravity, making her almost like a Fourth Member. On the Sonic Boom TV series, she is actually a member of Team Sonic alongside Sticks the Badger.

Sticks is one of Team Sonic members on the Sonic Boom universe. She has boomerang skills, and is pretty agile as well. She is kinda paranoic and crazy, but cares about and is loyal to her friends. 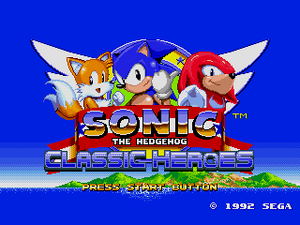 Team Sonic, as they appear on the Sonic 2 hack Sonic Classic Heroes