Reading, gardening and learning to cook.

Zero Numbers, Apostles of the Star and Torneo Rudman

Tearju Lunatique is a supporting character in the manga and anime series Black Cat. Tearju is also genetic template / creator of Eve and one of the most knowledgeable scientists in nanotechnology of the series.

Much of her past is not fully elaborated on though it is said that by the age of fourteen Tearju had graduated from Ashford University. In both the anime and manga she later went to become a brilliant scientist and considered the best in the field of nanotechnology.

In the manga Tearju first appears when Train is turned into a child and the group is looking for a way to return him to his original age. It is later revealed that she worked for Torneo Rudman who planned to use their research to create bio-weapons starting with having Tearju create a clone, Eve, who Tearju was forced to leave Eve to be raised by that man. Tearju is approached by Shiki and the Doctor who want her to make Creed immortal which she refuses while saying that she is disgusted by their willingness to work on living creature and truly regrets doing it in the past.

When Train and everyone else arrives asking for help Tearju says that there are two ways: one that would cost no less than one billion dollars or for Train to just concentrate hard enough to transform back. Tearju then offers for everyone to stay at her house until Train can return to normal. After seeing Eve, Tearju asks how she came to join them and informs Eve she is in fact a clone of her. As the two are talking to each other Echidna Parass and other members of the Apostles of the Star demand Tearju to reveal all her knowledge on nanotechnology only for Tearju to refuse yet again. All of a sudden Eathes appears and takes her form thus gaining her knowledge. Upon this they decide Tearju is no longer needed and tries to kill her though Sven and Eve are able to save her. All of a sudden Train returns to his original form with the ability to shoot electricity which Tearju explains as it being Train temporarily fusing with some nanites that are reacting to the electricity his body is generating. The next day as Train, Sven and Eve are about to leave, Eve says she will visit Tearju again so they can talk more about her creation.

In the anime Tearju doesn't appear for most of the series though her name is briefly mentioned early on. While Rinslet was trying to find info on the Zero Numbers she finds out about Tearju and her involvement in Eve's creation. Upon finding Tearju, Rinslet finds out she's been in a vegetative state but still tries to see if Tearju can be of help shows her a picture of Eve only for Tearju to all of a sudden become violent and attempt to attack her. It is soon revealed Tearju had hypnotized herself to have amnesia but her memories come flooding back after being shown a picture of Eve yet again. Upon regaining her memories Tearju explains that the Zero Numbers want to fuse Eve with Eden so they can recreate the world in their own image. Tearju explains that Eve was originally created to fuse with Eden so everyone would be fused with nanites and with Eden in order to create a virtual paradise. However Tearju and most the other scientists ultimately abandoned the project thinking it was too unethical before Torneo Rudman stole their research, Eve and destroyed the research facility. Tearju shares this information and agrees to help as much as she can to stop Eden from being compete and to save Eve. Ultimately it was due to this knowledge that Eve was saved and that the Zero Numbers failed.

In the manga Tearju is given more personality in the anime though this is mostly due to appearing sooner. In the manga she is portrayed as being generous and has a passion for cooking despite not being very talented at cooking. She also was shown to be rather clumsy often tripping even on her own feet. Both in the anime and manga she is shown to regret to some of her former actions such as experimenting on creatures and even helping with the plans for Eden in the past.

Tearju is described as an attractive young woman in her late twenties with long blond hair. While in the manga she has bright green eyes the anime changes this to being a pink similar to Eve's eyes. Due to being the one who's genetic materiel was used to create Eve they do share many similar features. 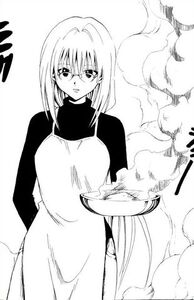 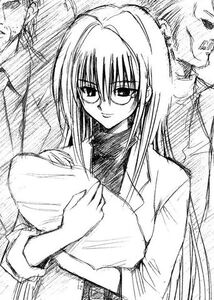 Tearju and a baby Eve 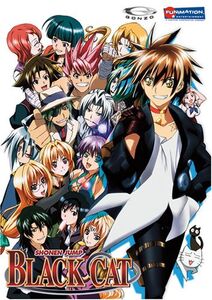 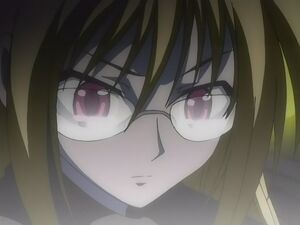 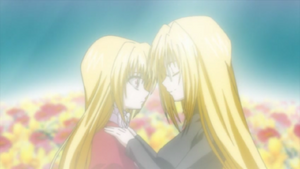 Retrieved from "https://hero.fandom.com/wiki/Tearju_Lunatique_(Black_Cat)?oldid=1860633"
Community content is available under CC-BY-SA unless otherwise noted.