Train his son to become as talented warrior like Revali. (ongoing)
Save Revali from his fate. (Age of Calamity, succeeded)

Teba is a warrior who resides in Rito Village. He is the husband of Saki and father of Tulin and childhood friend of Harth. He first appeared in The Legend of Zelda: Breath of the Wild, where he takes on a supporting role to the Hylian Champion Link in stopping the corrupted Divine Beast Vah Medoh from terrorizing the villagers. He also returns in Hyrule Warriors: Age of Calamity.

Teba's personality is the opposite of that of Revali's. While Revali was an arrogant and conceited Rito who envies Link and looks down on him at almost every opportunity, Teba is confident, yet humble, serious, and a bit stubborn at times who doesn't hesitate to compliment and encourage Link when it's due. He cares about his family and the villagers and will do whatever it takes to protect them, even going as far as to take on Vah Medoh, despite the danger it posed.

Similar to Revali, Teba is very proficient flyer and rides intense updrafts and has a strong passion for archery, which the latter wasn't seen in Breath of the Wild but in Age of Calamity, he is revealed to be very skilled with the Falcon Bow. He looks up to Revali very much and frequently takes his son Tulin to the Flight Range to train him so he would be able to one day surpass the Rito Champion.

Sometime before Link visits the village, Teba and Harth tried their best to appease Vah Medoh but it resulted in the latter being wounded and they had to withdraw. He returns to the Flight Range where he prepared for another attack against the Divine Beast.

Link travels to the Flight Range where he meets Teba, who isn't very sure about Link coming along due to his lack of wings and Vah Medoh being in the sky, but was willing to test his skills in aerial archery where Link instead uses his paraglider to ride the drafts and shoot the targets. After he passes the test, Teba permits Link to assist him, but warns of the sub-zero conditions that he must brave and suggests wearing warmer clothing. When they take to the skies, Teba tells Link that he will keep Vah Medoh's cannons pointed at him while the Hylian uses Bomb Arrows to destroy them. After an intense battle, Teba winces from the wound on his leg and so couldn't join Link and wishes the warrior luck and gives him a thumbs up before returning to the Flight Range while Link boards Divine Beast Vah Medoh.

When Windblight Ganon is destroyed and Revali's spirit is freed, the Champion takes back control of the Divine Beast and perches it high above Rito Village where he takes aim at Hyrule Castle. The Rito rejoice at being able to fly at greater heights without fear of being harmed anymore by the Divine Beast's weapons. It was then that Teba subsequently takes his son to the Flight Range every day.

Teba is summoned from 100 years in the future in the Breath of the Wild timeline by Terrako, a small Guardian who time-traveled back into the past to alter Hyrule's fate against the Great Calamity for the better. Teba manages to catch Windblight Ganon off-guard by attacking it from the flank with a trio of arrows, breaking its concentration as it prepared the killshot on Revali. With Teba's help, Revali is able to hold his own against Windblight Ganon, but when an attempt to use his Bomb Arrows on the Shard of Calamity Ganon is deflected by Windblight Ganon at the last second, Teba is shocked to see the enemy is still kicking before Revali assures him that the wind is at their backs now as Link, Zelda, and Impa arrive with Riju and Urbosa to aid them. However, in the end, Windblight Ganon escapes for the moment, but at least Vah Medoh and Revali are safe thanks to Teba.

With the safety of Vah Medoh and Revali secured, Teba joins them as they launch their counterattack against the corrupted Guardians and the rest of Ganon's monsters, with Teba taking out any Guardian Skywatchers that target Revali as he pilots Vah Medoh into combat, forcing them to turn their attention to him before they are then shot down in turn by Revali's Bomb Arrows, impressing Teba. However, Windblight Ganon returns to finish what it started and take over Vah Medoh, but Revali and Teba finally put the last Shard of Calamity Ganon to rest after a difficult battle in the skies over Hyrule. After Akkala Citadel and Fort Hateno are saved, Teba and Revali are summoned by Purah to join the other Divine Beasts and the unified coalition of Rito, Gorons, Zoras, Gerudo, and Sheikah in a reformed Master Kohga and his Yiga Clan, under Zelda's leadership with King Rhoam's blessing and support, to launch the siege to take back Hyrule Castle from the Calamity. Though Ganon surges his power into a Blood Moon to revive his forces, the Divine Beasts critically weaken him, allowing Teba and Revali to lead the Rito from the air while Rhoam, Link, Zelda, Impa, Kohga, and the other Champions lead the ground forces into the courtyard, only to be met by Astor and Harbinger Ganon, the Terrako of that timeline corrupted by Malice that followed the future Terrako into the past to stop it. Though both Astor and Harbinger Ganon put up a fierce resistance, both are defeated, leading to Astor, now on the verge of a total psychotic breakdown, ordering Calamity Ganon to devour the heroes, only for Ganon to decide that Astor has failed it one time too many, and absorbs him to turn Harbinger Ganon into a perfected body for Calamity Ganon itself. After turning the future Terrako against Zelda and Link, forcing Link to battle and critically damage Terrako to break the Malice's influence on it, a furious Zelda declares that Ganon's threat ends here and now and leads the charge into the castle citadel to face him.

However, Ganon proves invulnerable to all their attacks, until Terrako, reactivated by Zelda's holy power, launches a kamikaze attack on Calamity Ganon, the blast proving powerful enough to shatter Ganon's defenses and make him vulnerable. Once enough damage is dealt, Link cleaves Calamity Ganon in two with the Master Sword, before Zelda then uses her power granted to her by the Triforce and Hylia to seal Calamity Ganon away for good.

With Hyrule at peace once again, Teba's duty is completed, and the remaining energy in the ancient screw Terrako left behind when it self-destructed allows Teba, along with Riju, Yunobo, and the older Prince Sidon, to return home to the Breath of the Wild timeline. Before leaving, Teba exchanges parting words with Revali, still showing some respect to the Rito Champion despite seeing his true personality regarding Link, and with his memories of helping the Hyrule of an alternate timeline survive the Great Calamity staying with him, Teba is returned home with the other future Champions. 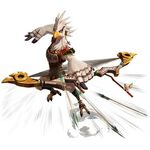 Teba shooting arrows at Windblight Ganon, making it direct its aim away from Revali.
Add a photo to this gallery

Retrieved from "https://hero.fandom.com/wiki/Teba?oldid=2238284"
Community content is available under CC-BY-SA unless otherwise noted.