He is an character in the show and only talked in the show's puppet segments., discontinued in later installments of the program. He is still seen in Caillou's room. Teddy is sometimes pessimistic but usually is in a good mood and always ready for a big hug. He doesn't like riding in the car, for he gets car sickness.

He was seen in Caillou's room when he was with Rexy and Gilbert. Caillou then puts Rexy, Teddy and Gilbert in the bed and turns them from cartoon forms into talking puppets.

He appears in Puppet Segments when he, Gilbert and Rexy are turned from cartoon forms into Puppet forms. Teddy was very sick when he dislikes driving car, Gilbert becomes an doctor and Teddy has check-up.

He is voiced by Matt Fincer.

Teddy's happy because his flu is gone. 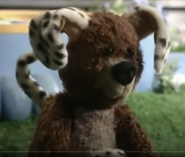 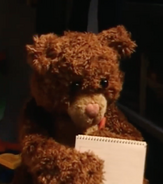 Retrieved from "https://hero.fandom.com/wiki/Teddy_(Caillou)?oldid=1995820"
Community content is available under CC-BY-SA unless otherwise noted.