The Teen Titans are a group of super powered teenagers who are trying to find their purpose in the world and to control their gifts.

The Teen Titans were founded by Dick Grayson as Robin, Bumblebee, Speedy and Kid Flash but wre then joined by Beast Boy who left the Doom Patrol to join the Titans. They then rescue a Tamaran named Starfire who had been sold to the Gordanians as a slave by her sister, Blackfire who had taken the throne. Unable to return to her planet, Starfire was offered a home and membership by the Titans in which she accepted.

Years later, the team's lineup changed with Nightwing, Starfire and Beast Boy still members and Blue Beetle and Raven as new members. Later they are training until Starfire informs them of Nightwing bringing Damian Wayne, the new Robin, to the tower. They welcome him with open arms but he brushes them off. During a training session, Robin continues to insult the others and Blue Beetle, tired of his attitude, tries to talk to him about showing them respect before a fight between them starts. Robin seemed to have the upper hand until the Blue Beetle Scarab blasts his face. Raven heals him but in the process sees his memories. He tries to find information about her but the only answers he gets from Starfire are that they took Raven in but never found out anything about her origin. She also explains the other origins of the other members but he leaves believing that faith is a belief based on absence of data and invites disaster. Later, Starfire talks with Nightwing by video chat about Damian's issues with the team and being a loner and Nightwing reveals that she can't expect him to be immdeitaley be friendly with the other Titans due to him having been training with the League of Assassins during his childhood. He then unexpectedly gives Starfire the idea of taking the Titans to the carnival to loosen Damian up. The team were having fun until Raven's father, Trigon, made contact with her to free him but she refused. The other Titans helped her fight off Trigon's minions. She then took them to Azarath and revealed her origins. When the Justice League came to take Raven away for questioning, the Titans refused to let her go. However, this was a trap set by Trigon to possess the Flash, Wonder Woman and Cyborg but Batman counteracts his own possession by injecting himself with Bane's nerve toxin, putting him in a comatose state. The Titans fight the possessed Justice League but are easily overpowered by them until Raven surrenders herself when the Titans' lives are threatened. Before the possessed League and Raven leave, Blue Beetle frees Cyborg from Trigon's control. They then locate Raven and the possessed League in the Middle East after Robin put a tracer on her. The Titans manage to free the League and save Raven but Trigon passes through the magical shrine that the possessed Superman unearthed. While the League battle Trigon, the Titans along with Cyborg enter Hell to get a crystal that Raven trapped her father in. However, the team are attacked by demons but before Robin and Raven can get to the crystal, Robin's grandfather, Ra's Al Ghul, destroys the crystal. Robin defeats Ra's Al Ghul and Raven uses the magic crystal re-imprison her father. She insists on staying in Hell but the Titans convince her that she belongs with them and she accepts. The team are congratulated by the Justice League until Cyborg arrives with pizza to celebrate with them. While everyone celebrates, Terra is seen heading towards Titans Tower.

A year later, after Terra joined the team, Nightwing re-joins the team to track down a terrorist cult called the H.I.V.E. led by Brother Blood. They attack a base where they get files while Nightwing offers Starfire to move into his apartment which she accepts. However, Robin and Raven are suspicious of Terra but Nightwing and Starfire believe that they can still giver a chance. They finds that she is having nightmares but she keeps on coldly telling them to leave her. The Titans then train with Starfire and Nightwing sparring but Terra suffers another flashback but brushes the Titans off again. One night, she leaves but with Robin following her and confronts her only to get captured by her and his old enemy, Deathstroke who was hired by Brother Blood to capture the Titans. Terra is revealed to be a double agent working for Deathstorke after he saved her from her village who accused her of being a witch. While Deathstroke holds Robin hostage, Terra returns to Titans Tower to continue spying on the Titans. The Titans put a party to celebrate the anniversary of her joining the team and she starts to warm up to them. They are then interrupted that the files that they took show that a scientist who is working for Brother Blood has files on a draining machine. The arrive at the lab to capture him but he destroys his files and is killed by a drone (controlled by Deathstroke). They discover photos of them and discover that the H.I.V.E. have been studying them and their powers and abilities during their attacks on the H.I.V..E.'s bases. The Titans then decide to be careful in case the H.I.V.E. attacks them on their own. However, Deathstroke captures Blue Beetle, Beast Boy and Starfire while Terra captures Raven. Nightwing manages to escape and locates the captured team in the H.I.V.E.'s headquarters. He saves them including Terra (who was betrayed by Deathstroke to Brother Blood) from having their powers drained but Brother Blood has become a chimera-like monster after absorbing their powers. Robin and Nightwing battle Deathstroke while the rest of the Titans battle Brother Blood. Terra intervenes to kill Deathstroke and Brother Blood is drained of his powers by Raven before being shot by his most loyal follower, Mother Mayhem. Terra then brings down the whole fortress and it kills her in the process. The Titans have moved on with their lives and that they have a new member revealed to be Wonder Girl.

The Teen Titans, both current and former members, are originally tasked with protecting the Earth while the Justice League left to fight Darkseid on Apokolips. However, following the Justice League's defeat, the Teen Titans are attacked and nearly wiped out by Darkseid's Paradooms, with Robin and Raven being the only survivors. Nightwing is killed, but is later revived by Robin using a Lazarus Pit when he rejoined the League of Assassins. However, his mind is completely broken and he has been confined in a cell while wearing a straitjacket. Starfire is revealed to have been converted into one of Darkseid's Furies. 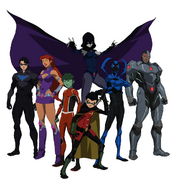 The Main Members and Associate