Hanging out with Roman

To help Dom and the crew take down and defeat international criminals and terrorists (all succeeded).

Brainy Criminal
Tej Parker is a central protagonist of the Fast and Furious Franchise.

He is a old friend of Brian O'Conner and the best friend of Roman Pearce. He is a high-ranking member of Dominic Toretto's crew.

He is portrayed by actor and musician, Chris "Ludacris" Bridges.

Tej does not race anymore, preferring to referee and make money off selling parts out of his garage and also due to what he claims to have stopped him from racing, an injured leg. He has an off-on relationship with Suki. WhenBrian O'Conner needs a place to stay, he allows Brian and Roman Pearce to stay in his garage rooms for a while. Later, when Brian needs to orchestrate a "scramble" to escape detection by the FBI, Tej shows him another large car garage owned by him, which they use for the scramble. Tej and Suki drive Brian and Roman's Mitsubishis out to be intercepted by the FBI, allowing them to continue their mission which shows that he still can drive as well.

Tej makes an appearance in Fast Five when Brian O'Conner askes him to come to Rio de Janeiro, Brazil to deal with the circuits surrounding Reyes' money for security. Tej becoms part of the team Brian and Dominic Toretto put together to rob 100 million dollars from the richest man in Rio.

Tej has a love/hate relationship with fellow team member Roman Pearce, with whom he shares insults and banter.

After the heist in Brazil, Tej purchased a small garage which he earlier revealed to be his dream.  With his share of the heist money, he also brought a Koenigsegg CCXR, of which there are only 4 in existence. One of which belongs to Roman Pearce who also brought one with his heist money and he believes to be the only person to own one in the Western hemisphere, until he sees Tej and sees he also has one meaning there are "2 in the Western hemisphere." But Roman tells him that they can "shine together."

Tej makes an appearance in this film, returning as part of Dominic Toretto's crew. He is known to be quite generous since the Rio heist in the events of Fast Five, giving away free money to locals. He continues to share banter with Roman Pearce and develops somewhat of a mild friendship with Agent Hobbs, having him named "Samoan Thor" on his cellphone. When asked by Dom to get new cars for the crew after their BMW M5s failed, Tej and Hobbs visit the classic car auction, and get insulted by a punter for their outfit, being quite unformal for the auction. However, Tej surprises the punter by buying all cars in the auction, which are then delivered to the crew's safehouse, saying that he needed to make use to his 10 million dollars from Rio heist. After the cars are delivered, he retaliates for the punter's comeuppance by making him undress and leave all clothing items to him and Hobbs as "more formal".

Later, Tej upgrades the confiscated weapon and invents a new harpoon made from titanium and powered with nitrous, which Rome "tests out" with him nearly killing Dom and Han. However, Tej seems to have made more of them as seen used during the airfield chase.

Tej also assists in taking down the airplane in an effort to stop Owen Shaw towards the end of the film.

Tej is shown to be highly humble even after he become a millionaire. Even though he had enough money to set himself up without working another day in his life, he still settled for a day job as a mechanic since cars were his passion. Tej's passion for cars is comparable to a marriage as describe by Hobbs. But Tej prefers cars over women since when you go your separate ways they don't take half his stuff.

Tej's car mechanics abilities far surpasses even Dom as regularly has him conduct car modification or replacement searching whenever their current cars were destroyed. He has also further enhanced weapons his team has confiscated from other teams. One example being Shaw's hook gun. Tej was originally brought into Toretto's crew because of his technical abilities with computers. He can crack any safe or hack into any system if there is even the slightest possibility anyone can do it. Tej's only limit to tech is when the system is fool-proof. Examples including Reyes' safe which couldn't be opened without his hand print. However, Tej was able to hack the electronic passcode of the safe but that alone couldn't open the safe.

Despite being the tech person of the crew and has not been seen directly fighting someone in the first two missions of the crew, Tej is shown to have background in close quarters combat as he easily disabled a security guard during a birthday party.

Tej Parker in his F9 Poster 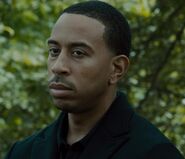