On his debut in 1979, he was known as the "Television Monster", a character that was fixated on television. He was violet-red and had antennae standing out of the top of his head, and his eyes would whirl around when he watched television. After that stint through season eleven, producers worried that he would be a negative influence on their easily influenced viewers, and changed him into the worry-wart character that he has been ever since.

His first appearance on Sesame Street, after the Television Monster season, was with guest star Itzhak Perlman playing the violin, while Telly played the tuba.

His name is derived from the British slang term for a television, "telly".

Telly is a triangle lover, and he has a pet hamster, Chuckie Sue. He has been known to Pogo stick uncontrollably around Sesame Street, often causing havoc with all that gets in his way. This segment is shown on Sesame Street Unpaved. Baby Bear is his best friend and appears occasionally in many of the main plots in the later series. Telly also has somewhat of a friendship with Oscar the Grouch, since they appear in many segments together.

In contrast to Kermit the Frog as a news reporter for the Sesame Street News Flash, Telly also has been a roving reporter for his own segment, called Monster on the Spot.

"He eats me?!" Nobody told me that the duck gets eaten in the story!" "Well you can forget it!" 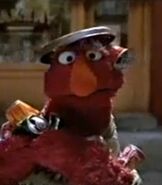 Telly and Two Headed Monster as the hunters came to rescue Peter Elmo, Zoe Bird and Oscar the Cat from the Wolf

Retrieved from "https://hero.fandom.com/wiki/Telly_Monster?oldid=2275075"
Community content is available under CC-BY-SA unless otherwise noted.