Thousand years before the series

To put an end to Lucemon's reign of terror (succeeded)

The Ten Legendary Warriors (十闘士Juttoushi, lit. "Ten Warriors") are a posthumous group of the past elemental heroes, who had recently defeated Lucemon in the ancient distant past before the events of Digimon Frontier. They existed only in the distant past, and while they passed on their abilities to the various types of Digimon they preceded, they left their powers to the Celestial Digimon in the form of the Spirits.

When Cerubimon was corrupted by Lord Lucemon, who was recently sealed in the Dark Area. When the five warriors of Earth, Water, Wood, and Steel became evil. While the 6 or five DigiDestined have obtained the warriors  of Fire, Wind, Wood, Light, Thunder, Darkness.

During the rest of many adventures, the modern Ten Legendary Warriors are divided into alignments depend upon their alignments. These ten subgroups consist one Human-Hybrid Level and one Beast -Hybrid Level. It sometimes include the warriors Rookie Level form, half-human form and  half-beast form Digimon produced a special Fusion Form, utilized all of the might of the atributes of the original Ten Legendary Warriors. When all of 20 spirits were gathered, the Warriors of Fire and Light have a Trascendant Form. When they are all united together, they can perform Susanoomon at the end of the entire series.

The Ten Legendary Warriors (伝説の十闘士 Densetsu no Juttoushi) lived and died long before the DigiDestined came to the Digital World. In the farflung past, Human and Beast Digimon began a war against each other, but the war was ended when the angelic Lucemon descended to the Digital World to bring peace and order. However, his power corrupted him, transforming him from a benevolent and loving ruler into a tyrannical despot. In response, the Ten Legendary Warriors appeared, fighting Lucemon and managing to seal him away within the Dark Area.

At some point, AncientGreymon and AncientGarurumon also fought against the evil Ornismon, and managed to seal it away on the Lost Island. Island of the Lost Digimon

The war eventually took each of the Warriors' lives, but they managed to pass on their powers in the form of the Spirits, which they left to the Celestial Digimon—the Spirits of Wind and Light were given to Seraphimon, Fire, Ice, and Thunder to Ophanimon, and Earth, Wood, Water, Steel and Darkness to Cherubimon. This story and their full appearances are revealed to the DigiDestined by Baromon at the Tunnel of History. It Can't Be! Lucemon Reappears

During the DigiDestined's battles against the corrupted Cherubimon's forces, they were swept up by the Lost Island, where they discovered that Murmukusmonhad been keeping the war between Human and Beast Digimon running in order to reawaken Ornismon. With the help of Bearmon and Kotemon, the DigiDestined managed to temporarily revive AncientGreymon and AncientGarurumon, who quickly slayed the monstrous bird. Island of the Lost Digimon

The souls of the Legendary Warriors lay dormant within the Spirits, existing as silent partners to the DigiDestined, but they eventually reveal themselves during the final battle with Lucemon. Having taken on the personalities of the children who wielded their power, the Warriors encourage the DigiDestined, giving them the morale boost they need to evolve into Susanoomon, then eventually dealing the final blow to Lucemon Larva while in the form of their Human Spirits. In the wake of Lucemon's destruction, the path back to the Human World is fading, and so the Warriors throw their human counterparts into the closing portal. As the DigiDestined fly to their destination, they bid farewell and vow to watch over the Digital World in their place. End of the Line 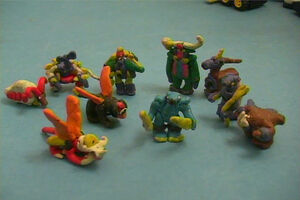 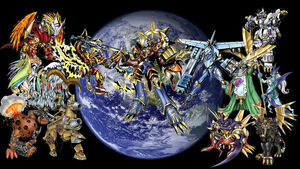 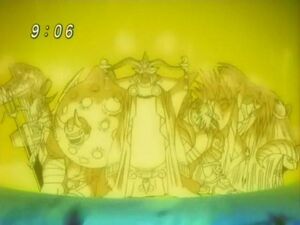 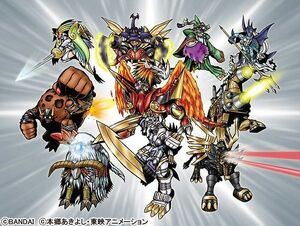 Retrieved from "https://hero.fandom.com/wiki/Ten_Legendary_Warriors?oldid=1664169"
Community content is available under CC-BY-SA unless otherwise noted.