Tenzin (The Legend of Korra)

The Son of Avatar Aang

Spending time with his family.
Sharing information of airbending and spirituality with others.

Guide and mentor Avatar Korra.
Protect his family.
Defeat Amon and the Equalists (succeeded).
Locate and train a new generation of Airbenders to rebuild the Air Nation (post-Harmonic Convergence, succeeded).
Restore order to the Earth Kingdom and stop Kuvira and her forces (succeeded).

Tenzin is a main protagonist of The Legend of Korra, serving as one of the two tritagonists (alongside Asami Sato) of the first two seasons and a major character in the second two seasons.

He is voiced by J. K. Simmons, who also voiced Ford Pines from Gravity Falls and Omni-Man from Invincible.

As the only airbender to be born in over a hundred years, Tenzin was extensively taught the traditions and customs of the Air Nomads by his father and eventually earned the traditional Air Nomad arrow tattoos, symbolizing his status as an airbending master and lead to him and his father forming a stronger bond than Aang and the rest of his children

Tenzin is the youngest child of Avatar Aang and Katara and the oldest living airbending master. He lives on Air Temple Island with the Air Acolytes, his wife Pema, and their four children: Jinora, Ikki, Meelo and Rohan. However, with the resurfacing of airbending across the Earth Kingdom after the Harmonic Convergence, Tenzin and his family temporarily relocated to the Northern Air Temple in hopes of recruiting the new airbenders. Due to being a calm man, he represented the Air Nation on the United Republic Council in Republic City prior to its dissolution and was responsible for educating Avatar Korra in both the art of airbending and spirituality.

As the only airbender to be born in over a hundred years, Tenzin was taught the traditions and customs of the Air Nomads by his father, eventually earning the traditional Air Nomad tattoos. Tenzin inherited most of his father's mementos prior to his father's death. After Korra (who would eventually become Tenzin's student) was revealed at a very young age as the new Avatar, Tenzin, along with Sokka, Zuko, and Korra's father, Tonraq, thwarted an attempt to kidnap the child. The kidnappers, led by Zaheer, were apprehended and imprisoned. Because of this threat and the potential for future threats, Tenzin and Tonraq elected to move Korra to a compound at the Southern Water Tribe where she could live and train in safety.

Tenzin has a longstanding friendship with Lin Beifong, who is the daughter of Toph Beifong, and at one point the two characters were romantically involved. Tenzin offered her comfort and a higher level of trust was reached between the two. However, their romantic relationship deteriorated, partially because Tenzin wanted children while Lin did not and because of Lin's abrasive nature. It was during this time that Pema, who was an acolyte of the Air Nation, approached Tenzin and confessed her feelings for him. This indirectly led to the end of Tenzin's romantic relationship with Lin and the beginning of his relationship with Pema. The two eventually married, and would have four children: Jinora, Ikki, Meelo and Rohan.

In stark contrast to his father Aang, and his siblings Bumi and Kya, Tenzin is described as a stern and serious character. However, he still does possess a sense of humor, which he shows at times. Tenzin projects a calm demeanor, but can be flustered by perceived foolishness or madness. The character is also characterized as prideful, particularly when it comes to addressing his shortcomings. Tenzin is also described as a traditionalist, though he has shown openness in breaking with tradition.

As the first airbender among Aang's three children, and the only one during Aang's lifetime, Tenzin has been trained extensively in all of his father's airbending knowledge and prowess. After his father's passing, he became the only airbending master in the world of his era and his abilities, despite being a pacifist at heart, were proven to be incredibly formidable indeed. Despite his rare participation in battle, Tenzin's abilities allowed him to effectively pass on the art to his Airbending children and Avatar Korra, all of whom became powerful in the art themselves, ensuring that the teachings and techniques would live on and despite his the new recruits who have just acquired airbending abilities. Tenzin is well-versed in all airbending techniques and may have even created his own technique such as a previously unseen variant of Aang's air scooter technique, conjuring a "wheel" of air which not only allowed him to evade attacks, but was powerful enough to deflect the claws of the mecha tanks. He is also able to use a glider by bending the air around it. Tenzin is skilled in creating extremely powerful tornadoes that are strong enough to throw the mecha tanks in the air. He was also capable of creating an air dome of sorts to protect himself and others from any harmful gases. Tenzin has also displayed the ability to use airbending in order to conduct a spiritual cleansing of an area, which can restore a place's connection with the Spirit World.

Despite being a pacifist at heart, Tenzin has proved to possess incredible combat prowess, in addition to being in excellent shape for a middle-aged person. During the first confrontation with the Equalists' mecha tanks, Tenzin alone was able to single-handedly hold them off for a time, releasing air blasts that were powerful enough to knock his opponent back. When the Equalists launched a sneak attack to capture him, he effortlessly dodged their initial assault with ease and even when his hands were bound, he was able to calmly dodge all of a chi blocker's close-range attacks before swiftly defeating them with a tornado that easily defeated his restrainers and the last Equalist. Tenzin was also the first one to overpower Amon, delivering an airbending kick that knocked him and the Equalists off. Likewise, he easily overwhelmed the highly proficient Airbender Zaheer, who had earlier defeated Kya and Tarrlok, powerful master waterbenders, in a fight, casually countering all of Zaheer attacks without being hit once and landing blows that steadily wore him down. Even against Pli, Ghazan, Ming-Hua and Zaheer all at once, he was shown to be able to fight off the latter three, with the only reason he lost being due to Pli's combustions overwhelming him whenever he was about to attack the others.

Tenzin is shown to have excellent stamina, especially for his age as he can go for a ten-mile hike without tiring. Tenzin is also shown knowledgeable regarding locations in the Spirit World, such as the Fog of Lost Souls and the Tree of Time despite never entering the Spirit World before. 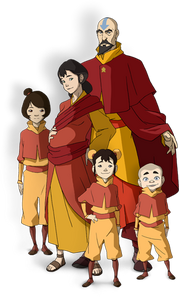 Tenzin and his family 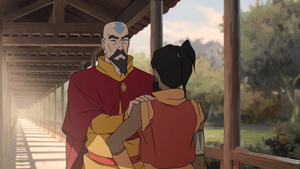 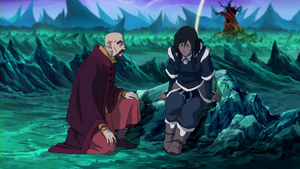 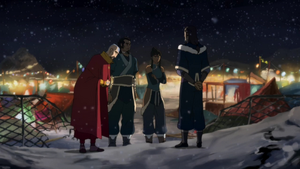