Teresa is one of the main protagonists of the manga/anime series Claymore. She is the 182nd warrior of the 77th generation in the Organization, formerly ranked as No.1. She is among the eight No.1 warriors capable of surpassing the original Abyssal Ones, considered even to be the strongest ever created. She was also Clare's adoptive mother, and the reason she became a Warrior.

She was nicknamed "Teresa of the Faint Smile" (微笑のテレサ, Bishō no Teresa, lit. "Smiling Teresa") because she never disclosed specialized or extraordinary techniques from wich is a Nickname often derive, it is also based on the fact that she never used her massiv yoki-reserve but destroyed though every manner of enemie she faces with ease, in wich especially her smile stood out.

Teresa was a very tall woman (180cm) with long, wavy, pale blonde hair parted down the middle, which she wore loose. She had silver eyes like all other Claymores, and wore the standard uniform. In a dream, Teresa remembered her once-black hair, which she had considered to be her best feature, and black eyes. She lost both as a side effect of the Claymore mutation.

Teresa was also considered to be beautiful, several of the bandits who attacked her and Clare in the forest commented lewdly that she was very attractive.

As a trainee, Teresa didn't want to be a Claymore and would constantly attempt to escape. She was known as a "problem child."

Before Teresa met Clare, she was a merciless, solitary killer who would accept any assignment without complaint. She seemed to enjoy intimidating the townsfolk and made it sound as if the Organization was responsible for sending Yoma to the towns that failed to pay the required fees. When Teresa met Clare, she obstinately tried to prevent the little girl from following her around and even physically hit and kicked her away, saying that she killed the Yoma because it's her job and nothing else (ironically, Clare herself would later say the same thing to Raki). She always had a faint smile on her face, hence her title "Teresa of the Faint Smile."

However, despite her initial violent nature, she does possess a kind and caring side. When it was made clear that Clare would not give up following her, however, she opened up her heart, and her formerly cold personality changed as she became very attached to the young girl. They grew a bond like a motherly, daughter bond and lived together from then onwards until Teresa's death by Priscilla.

In Irene's opinion, being with Clare had softened Teresa's toughness as a warrior and eventually led to her death when she chose to spare the lives of her executioners. However, Irene theorized that Teresa had found true happiness in her last days because of Clare and would not have changed her actions if she were to relive her life. This conclusion was indeed proven to be true as confessed by Teresa after her revival from within Clare. As such, she thanked God, if He ever existed, for having met Clare.

As half-breed (half-Yoma, half-Human) her physical prowess is in every term far above humans, include higher regeneration and durability. Her unique constitution enables her to manage longer time without food or water, neutralize toxins and regulate body temperature.

Clare not innherited Versatility, only Preemptive Sensing. High excel in mental and physical ability are essential for advanced abilities and techniques.

The Organization note Teresa's ability to defeat every manner of Yoma-opponent without releasing any Yoma-power, and sensing ability beyond all other warriors.

Her abilities makes her the most powerful, even among all successive generations of warriors.

Note: It is unknown wether the organization was aware of what Teresa was capable of at 10% Yoma power release, since according to the Evaulation she never used her Yoma power. 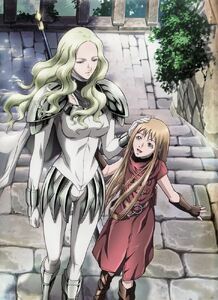 Previously it was assumed that Teresa had only developed the strongest ability in the area Sensing (S) but not in all combat relevant areas. Noel's suspicion before the four began to fight Teresa, becames an unexpected reality. After battle Irene realized she was underestimating Teresa.