Co-Creator of the Maze

Doing what she think is right for herself or others.

To help the WCKD organization with their agendas (formerly, failed).


Teresa Agnes, originally named Deedee, is the first and only female Glader and a creator of the Maze with Thomas. She is the deuteragonist / secondary protagonist and anti-hero of the Maze Runner series, and was named after Mother Teresa.

However, she became more of a villain in the climax of the second film when she joins WCKD. But in the third film, she rejoins Thomas and his friends and becomes the deuteragonist once again.

Teresa is portrayed by Kaya Scodelario, who also portrays Effy Stonem in Skins, Zoey Walker in Now is Good, Carina Smyth in Pirates of the Caribbean: Dead Men Tell no Tales, and Haley Keller in Crawl.

In The Kill Order, a year after the Sun Flares, Deedee was living in a village with a large group of people, including her parents and brother Ricky. When the Flare began to spread, everyone in her village shunned and abandoned her when they found out she was immune to the virus, believing her to be a demon of some sort. In the end, Teresa told Thomas that her original name was Deedee.

Sometime after Thomas has arrived in the Glade, Teresa arrives in the Glade. Newt jumps down into the Box, takes a note from Teresa's hand, and reads "She's the last one ever". Teresa suddenly wakes up, recognizes Thomas, says his name, and goes back to sleep.

Later, Teresa, who has woken up, flees to the tower and throws rocks at the Gladers. Thomas stops her and goes up to talk to her, while the Gladers leave. When Thomas asks Teresa why they are different, Teresa takes two vials of serum she had with her when she arrived in the Glade out of her pocket and gives them to Thomas. Thomas sees that the two vials of serum have the letters W.C.K.D. on them, leading Teresa to wonder if she, Thomas, and the Gladers were sent to the Glade for a reason.

The next day, when Thomas and Minho return to the Glade, Thomas and Gally start arguing with each other, when Teresa calls out to them and the Gladers and tells them that Alby is awake.

In the medical hut, Teresa watches Alby tell Thomas that he remembers that Thomas worked for WCKD.

At night, during the Grievers' attack on the Glade, Teresa, Thomas, Newt, Minho, Frypan, Alby, Chuck, Winston, Jeff, and Clint hide in the Council Hall from the Grievers. Teresa watches Clint get killed by a Griever. Chuck is caught by a Griever, but Alby sacrifices himself to save him.

After the attack, Gally punches Thomas in the face and blames him for everything that has happened. When Thomas uses a Griever stinger to stab himself in the thigh to regain his memories, Teresa, Newt, Minho, Frypan, Chuck, Winston, and Jeff tend to him.

The next day, Thomas tells Teresa, Newt, Minho, Frypan, Chuck, Winston, and Jeff that he and Teresa worked for WCKD and created the Maze.

Teresa helps the Gladers fight off the Grievers, but Jeff dies trying to save Minho from a Griever. The Gladers go into the WCKD lab and watch a video left by Ava Paige, who shoots herself at the end of the video.

Teresa and the Gladers are about to leave when Gally, who is stung by a Griever, arrives and tells that they will never be free. Gally aims a gun at Thomas, but Minho throws a spear at Gally, impaling him in the chest, while Gally shoots a bullet at Chuck, hitting him in the chest. Teresa watches Chuck die in Thomas' arms before a group of masked soldiers arrive and take the Gladers to a helicopter.

Teresa works as a scientist for WCKD. She watches Minho being put through programmed trials by WCKD so they can extract his blood.

At night, Teresa visits a little girl named Cheyenne in the medical wing and injects the serum containing Minho's blood into her arm and she recovers.

At night, Teresa visits Minho in a room and tells him that Cheyenne has been infected for three weeks and that Minho can save her and everyone else. But when Teresa is about to leave the room, Minho attacks her, screaming at her for being a traitor. The WCKD soldiers restrain him, but not before Minho grabs a metal hair clip from Teresa. Teresa discovers that the serum has failed on Cheyenne, as she has now become a Crank.

When Teresa leaves the WCKD tower, she sees Thomas on the other side of the street. She follows him into an alley and they talk. After they finish talking, Thomas signals for Gally to put a sack on Teresa. Thomas and Gally take Teresa to an abandoned church where Newt, Frypan, Brenda, and Jorge are. Teresa is shocked to see that Gally is alive, and Gally asks her where Minho is. Teresa tells him, Thomas, Newt, Frypan, Brenda, and Jorge that Minho is in Sub-Level 3 with the Immune teenagers. Gally takes a scalpel and tries to use it to cut Teresa's finger off, but Thomas takes the scalpel from him. Thomas convinces Teresa to remove their trackers.

While removing Thomas' tracker, Teresa discovers that Brenda is looking good and healthy and asks Thomas when her last treatment was. Thomas tells her that Brenda's last treatment was back in the mountain camp of the Right Arm. Teresa removes Thomas' tracker. Gally approaches Teresa and Thomas and asks them if everything is okay. Thomas tells him that everything is okay. Teresa tries to pick a scalpel up from the table, but Gally stops her and takes her outside, but not before Teresa grabs a cloth with Thomas' blood on it from the table.

Teresa, Thomas, Newt, and Gally go to the WCKD tower, while Frypan climbs up a crane, Brenda goes to a parking lot to steal a bus, and Jorge return to the Right Arm's hideout.

Teresa, Thomas, Newt, and Gally arrive in a stairwell. While Thomas talks to Frypan and Brenda on a walkie-talkie and Gally plugs a jamming device into an electrical box, Teresa watches Newt cough from being infected by the Flare.

Teresa, Thomas, Newt, and Gally arrive in Sub-Level 3 where Thomas, Newt, and Gally shoot the WCKD guards, Thomas discovers that Minho is not in the cell and asks Teresa where he is. Teresa shows Thomas Minho's profile and tells him that Minho has been moved up to the medical wing. Teresa, Thomas, and Newt go to find Minho, while Gally takes the vials of serum out of the vault and takes them and the Immune teenagers to Brenda.

Teresa, Thomas, and Newt take the elevator to find Minho, Janson joins them in the elevator and talks to Teresa, but then realizes that Thomas and Newt are in the elevator, but Teresa, Thomas, and Newt manage to escape. When Thomas asks when the Flare will stop, Teresa tells him that it stop when WCKD finds a cure. Thomas tells her that there is no cure. Janson holds them at gunpoint, but Teresa manages to let Thomas and Newt go to find Minho while she goes to do a blood test on Thomas' blood.

Teresa examines Thomas' blood and finds that it not only keeps the Flare virus in check, but also destroys it. She reveals this to Ava Paige and suggests that they find Thomas.

While Thomas is dragging Newt to the berg, Teresa broadcasts her voice throughout the Last City, telling Thomas that his blood can cure Newt like it did Brenda and that he needs to return to WCKD.

After Thomas kills Newt, he returns to the WCKD tower where he talks to Ava Paige. Paige tells Thomas that he save them, but is shot in the back by Janson, who takes Thomas to a lab where Teresa is extracting his blood. Janson reveals to Thomas that he has been infected by the Flare and plans to inject the serum with Thomas' blood into his arm, causing Teresa to hit Janson in the head with a glass flask, knocking him unconscious. Teresa tries to release Thomas, but Janson regains consciousness and knocks Teresa down. Thomas frees himself and engages Janson in a fight, but Janson overpowers him and prepares to shoot him, when Lawrence's crew fires a missile at the WCKD tower, knocking Teresa, Thomas, and Janson down. Teresa carries Thomas to the medical wing, but not before Janson shoots Thomas in the stomach. Teresa offers to give the serum containing Thomas' blood to Janson, but Janson refuses and wants Thomas himself. Thomas throws a very heavy object at a glass front, allowing the Cranks that are locked inside it to break out and attack Janson. Teresa carries Thomas to the roof, gives the serum containing his blood to him, and kisses him. Minho, Gally, Frypan, Brenda, Jorge, Vince, and the Immune teenagers arrive in a berg. Thomas is unable to get on the berg due to his wound, but Teresa throws him onto the berg, allowing Minho, Gally, Frypan, Brenda, and Vince to pull him aboard. Teresa falls to her death when the WCKD tower collapses.

Sometime later, at the Safe Haven, Thomas goes to the memorial rock and carves Teresa's name on it.

Teresa was described as very beautiful, and looks about fifteen years old, though actually seventeen. She was described in The Maze Runner as being "thin, but not too small," "roughly five and a half feet," with "burning blue eyes" and skin that was "pale, white as pearls." She had silky "tar black hair" with "long legs" and "perfect pink lips." 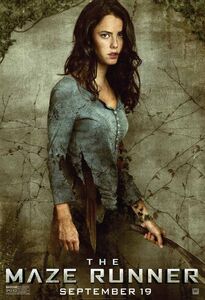 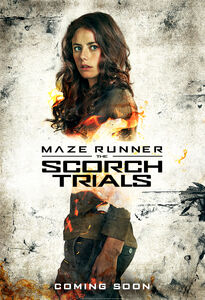 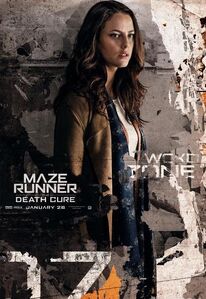 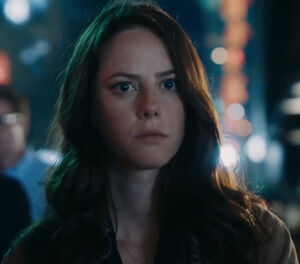 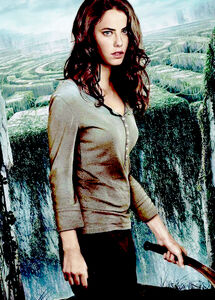 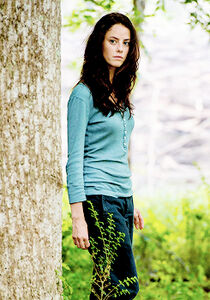 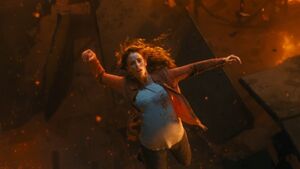 Teresa's death.
Add a photo to this gallery

Retrieved from "https://hero.fandom.com/wiki/Teresa_Agnes?oldid=2190496"
Community content is available under CC-BY-SA unless otherwise noted.