To find out who is sending death threats to him (succeded)

Terkel Mogensen is the son of Shelia and Leon, the older brother of Rita and is the protagonist of the 2004 Danish CGI comedy drama musical film Terkel In Trouble, and a supporting character in the 2018 movie, Chekered Ninja.

He is voiced by Anders Matthesen in the original Danish version, Aksel Hennie in the Norwegian version and Adrian Edmondson (who also played Eddie) in the English version.

Terkel is a 6th grade student who attends Chestnutlane school with his best friend Jason. One day the two boys meet a man named Gunnar (Justin in the English version) who points out that Terkel has sat on a spider, but Terkel says his jeans can be washed.

Terkel's teacher is fatally ran over and the replacement is Gunnar. Following his parents's wedding, Terkel is manipulated by his class's bullies Sten and Saki to steal beer for them at the party. However, Terkel's uncle Stewart arrives and beats up Sten and Saki, to which they blame Terkel and start to bully him. One day at school, an overweight girl named Doris gives Terkel a love letter, but Sten and Saki see this and tease them and call them a couple. Despite wanting to defend Doris, Terkel decides to save his face and tells Sten and Saki that he's not in love with Doris and calls her a "fat cow". This statement, greatly upsets Doris, who commits suicide by jumping out of the classroom's window. After this, Terkel begins to receive death threats,

One day, Gunnar takes the class on a school trip to study salamanders where on the bus there, Sten and Saki invite Terkel to sit with them, which angers Jason. The two also want him to share a tent with them, which he does. Later, Saki arrives in the tent with a black eye, saying Jason beat him up. Terkel thinks Jason has been acting strange and is told by Sten that Doris was Jason's sister, making Terkel believe that Jason is the one sending him to death threats as Terkel had caused his sister's death.

When getting into bed, Terkel finds a dead cat in his sleeping bed and receives a text from Jason's phone which says "I'm coming to kill you". Sten and Saki advise Terkel to go to Gunnar, which he does. However, when Terkel tries to call Jason, he sees that Gunnar has it and realises that it was Gunnar that was sending the death threats in revenge for sitting on the spider. Just when Gunnar is about to kill Terkel, Jason arrives and attacks Gunnar with an iron pipe he carries around and smashes it through his head. Terkel and Jason reconcile and walk away in the sunset, only to be scared by the narrator and music teacher Arne who is wearing a hockey mask and holding a chainsaw.

Terkel also appears in the 2018 sequel Chekered Ninja, where he is an adult, at the main character Aske's birthday party. He is revealed to have a baby daughter named Doris Jr, because of him feeling gulity over the death of the original Doris. 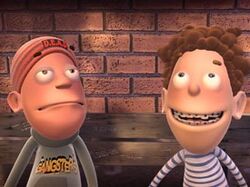