Important Note: This article is ONLY for the HEROIC T-800 from Terminator 2: Judgment Day and his GOOD reincarnations in the sequels. NOT his villainous reincarnation in the original film.

Protecting John from the T-1000 and learning how to be a normal person.

Protect John Connor and his mother, Sarah from the T-1000. (Succeeded)

John Connor (Only in the Original Timeline)

The Terminator (also known as the T-800) is the titular deuteragonist of the 1991 action film, Terminator 2: Judgment Day and the tritagonist of its 2019 sequel Terminator: Dark Fate.

To protect his younger self in the past, John Connor captured this Terminator and reprogrammed it before sending it back in time via the time displacement sphere. Upon arrival, it encountered a group of bikers, stealing one's clothing and the bar owner's sunglasses and shotgun.

The T-800 then tracked down John Connor in a shopping mall. When it met the T-1000 sent by Skynet to kill Connor, a lengthy chase ensued, but the two managed to escape the T-1000. Connor questioned the Terminator about itself and who sent it. The Terminator answered that it is a cybernetic organism, having living tissue over its metal endoskeleton. It told John that it was his future self who sent it to protect him.

John and the Terminator go to the Pescadero State Hospital to help free John's mother, Sarah. The three manage to go to the garage, and Sarah almost succeeds in killing the Terminator by smashing its CPU chip, but was stopped by John, who felt that it was needed. He learns that the Terminator has the capacity to learn. When Sarah asks it who built Skynet, it answered that it was Miles Dyson. It explained that Skynet became self-aware after its creation and began to deny human authority.

The group later encountered Dyson, but didn't kill him. The Terminator explained to Dyson the consequences of his research. The three, along with Dyson, attempted to destroy the Cyberdyne building to prevent Skynet from being created. They were soon approached by the police. John, Sarah, and the Terminator escaped the building while Dyson blew up the building with himself inside.

The three were encountered again by the T-1000. The Terminator succeeded in destroying it when it falls into molten steel. John drops the CPU and the arm of the first Terminator into the hot liquid. Since the Terminator had a computer chip in it, it also planned to destroy itself to prevent its technology from being discovered by others to create Skynet. John begged it not to be destroyed, but it had to fulfill its mission. When John cried, the Terminator understood why, but could not cry itself because it was a machine. It hugged John for the first and very last time, and having finally earned Sarah's respect, shook her hand offered to a brother warrior. As it is lowered into the steel below, the Warrior of Steel-in-Flesh gave John an encouraging thumbs up before sacrificing its life for humanity's future.

The T-800 appears in the video game Mortal Kombat 11 (MK11 for short) as a DLC guest character. After being assigned to kill Sarah Connor, the T-800 finds himself in the Mortal Kombat Universe. Upon getting reprogrammed by Jax, he defeats Kronika and uses the Hourglass to stop the war between humanity and the machines. Knowing his knowledge will threaten the realms, the T-800 jumped into the Sea of Blood to make sure no one tempers with time again. As one would expect, there are many interactions based on whether the T-800 got reprogrammed or not. Some intros have him act hostile towards humans and his counterpart while other intros have him express his desire to protect humanity. This is an accurate take of how the timeline's work in the movies as some versions of the T-800 are still evil.

In the game, the Terminator acts differently as while he isn't as chatty as most of the cast, he does engage in conversations with his opponents. Furthermore, while he never screams in pain or make any sound aside from intros and taunts, he does flinch and react like the other combatants. This decision resulted in some fans feeling disappointed as they feel this is an inaccurate depiction of the character. Some even called out Ed and his team for being lazy. Otherwise, most aspects of the Terminator gained heavy praise. 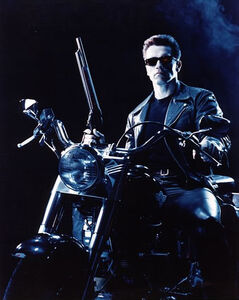 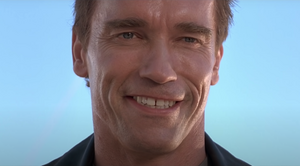 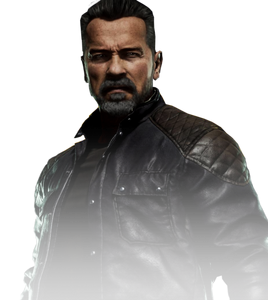