Terrafin is a dirt shark in Skylanders: Spyro's Adventure.

He is voiced by Joey Camen who also voiced Boomer and Free Ranger.

Terrafin hails from The Dirt Seas, where it was common to swim, bathe, and even snorkel beneath the ground. But a powerful explosion in the sky created a blast wave that turned the ocean of sand into a vast sheet of glass, putting an end to Terrafin's duty as the local lifeguard. Not one to stay idle, the brawny dirt shark found himself training in the art of boxing, and not long after, he was local champ, earning treasure by competing in local battle arenas. Fighters came from all around to challenge him, but it was a chance meeting with a great Portal Master that led him to give up his title for a greater purpose.

Terrafin was a boxer, so it makes perfect sense that his most dangerous abilities are melee attacks. He can punch very dangerously and can burrow underground, belly flopping enemies from above. He fights long ranged by summoning melee sharks, but they do very weak damage and, unless upgraded to home in on enemies, don't directly attack them. 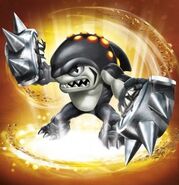 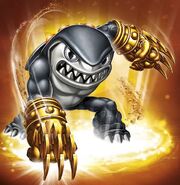 Retrieved from "https://hero.fandom.com/wiki/Terrafin?oldid=2178176"
Community content is available under CC-BY-SA unless otherwise noted.