To protect The Unova Region

Terrakion is a bulky, quadrupedal ox-like Pokémon. Its body is mostly gray, with tan coloration on its face, underbelly, and legs. It has sharp orange eyes with small black pupils. It has two large sharply curving brown horns protruding from either side of its head, and a crest of spikes on its forehead. It has a plump, yet powerfully-built and muscular body with thick legs. Its has tan boot-like formations encircling each foot, and deep brown hoof-like feet. It has a stubby pointed tail and orange features protruding from the hump on its shoulders.

Terrakion does not trust humans, and once fought against them alongside Cobalion and Virizion to protect Pokémon. It is a strong, protective Pokémon. It usually seems to have a fierce grimace etched on its face.

Pokémon The Movie - Kyurem vs. the Sword of Justice 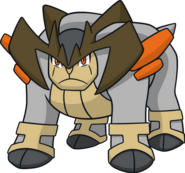