Trying to woo over the female students.

To get out from Killing School Trip (failed, DR2).

To stop Ryota Mitarai from brainwashing the world with hope (succeeded).
To atone for his actions as Ultimate Despair (ongoing).

Teruteru Hanamura is one of the characters featured in Danganronpa 2: Goodbye Despair.

He has the title Ultimate Cook.

He planned to murder Nagito Komaeda when he saw his true attempt to kill someone, but he ended up accidentally killing Byakuya Togami in Chapter 1. But in reality, both Byakuya Togami and Teruteru are still alive.

Teruteru has a plump body, and wears a classic chef outfit. It is composed of a white apron with a red undershirt, a red handkerchief/scarf around his neck. A small chef's hat sits on his head. He has dark brown hair all over that is styled in a pompadour that noticeably leans to the left, and constantly carries around a comb to fix his hair.

Unlike the characters of the first and the second game, his eyes are normally two, dark dots or remain closed in the anime fashion. One sprite expression of his comically has his eyes in a style reminiscent of bishounen manga, and thick eyebrows accompanied with a nosebleed.

Teruteru is very lewd and usually can be seen hitting on anyone near him, male and female alike. Similar to Hifumi Yamada from the previous game, he can react to the slightest innuendo that surfaces in a conversation. Teruteru also has a tendency to place random English words in his speech and insistently tell other people to call him Ultimate Chef instead of Ultimate Cook, as it 'gives off a more urban feeling'.

When he is not making innuendos or hitting on someone, he is shown to be decently friendly and relatively upbeat. He takes great pride in his cooking, as shown by his offended reaction during the first trial when it was suggested that Teruteru's cooking had a laxative in it. When Monokuma appears before the students along with the Monobeasts, Teruteru constantly denies that the things around him are actually happening and dismisses them.

Despite his lecherous attitude, he loves his mother back at home greatly. Knowing she is prone to illness, Teruteru is even willing to murder someone in order to come home to see her again.

Teruteru is also revealed to be quite a kind, caring person past his exterior. However, in some moments Teruteru can display a certain snarkiness that rarely comes up but is undoubtedly there.

When extremely agitated, stressed, or angry, Teruteru loses his normal speech pattern and breaks down, yelling angrily in an incomprehensible, country-like dialect, which is extremely difficult for other standard Japanese speakers to understand.

In the English version, he instead switches from standard English to an accent that straddled between black vernacular and southern; while it was not difficult for players to comprehend the text as in the Japanese version, it proved quite difficult for the other students to understand him. 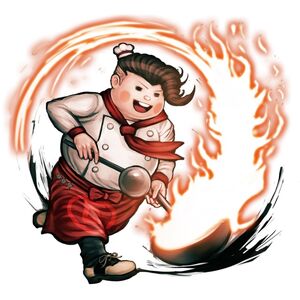 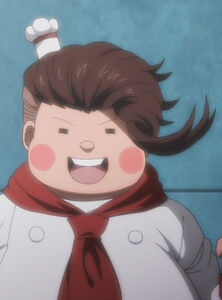 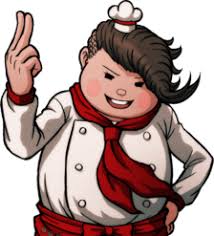