Save his people from complete doom.

Defend Gondor with his life (fulfilled).

Théoden, son of Thengel was the King of Rohan towards the end of the Third Age; during the War of the Ring and one of the many heroes in J.R.R Tolkien's The Lord of the Rings Trilogy and Peter Jackson's films of the same name respectively.

He was the uncle of Éomer and Éowyn and the father of Théodred. During the war, he was brainwashed by Saruman the White and under the control, he unintentionally allowed orcs to roam the plains of Rohan and kill and destroy in their path. Saruman appointed Grima Wormtongue, Théoden's trusted servant to speak for Théoden. He was saved by Gandalf and offered his allegiance with the Fellowship in the war. He lost his son Théodred in battle and banished Eomer. Determined to save his people from Saruman, he retreats to Helm's Deep where one of the major battles of the war would occur. After the victory at Helm's Deep and the death of Saruman, Théoden reluctantly rode to Minas Tirith to aid Gondor in the Battle of Pelennor Fields against Mordor. He was attacked on the battlefield by the Witch-king of Angmar and almost slain but was rescued by Eowyn who slew the Ringwraith. He thanked his niece and died from his wounds. Théoden appeared in The Two Towers & The Return of the King and was portrayed by Bernard Hill.

In the film, Sauron appointed Saruman to destroy Rohan to gain control of the region north of Gondor. He controlled Théoden with his magic and appointed Gríma Wormtongue to speak in Théoden's aid. During "Saruman's" rule, orcs, Uruk-hai, and wild men banished by Rohan ambushed villages and killed innocent women and children. During one battle, Éomer found Théoden's son Théodred, barely alive, and brought him back to Edoras. Eomer told Théoden but he just stood there silent and look aged and deformed from Saruman's magic. Éomer assured him that Saruman was behind everything but Wormtongue quickly rebuffs him saying Saruman is an ally and under a false decision from the king, he banished Eomer and his men, 2000 soldiers from Rohan.

A few days later, Éomer ran into Aragorn, Legolas and Gimli and told them of Théoden's condition and to be careful. The trio found Gandalf, reincarnated and now a white wizard, and explained to him and he decides to ride to Edoras and rescue Théoden. When they arrive, Théoden's guards had them surrender their weapons but Gandalf convinced them to let him keep his staff. Wormtongue told Théoden (really Saruman), that Gandalf returned. Aragorn and the others held off Wormtongue and the guards and Gandalf began breaking the spell. Théoden laughed that Gandalf could not break the spell but Gandalf, revealing himself as the White performs an exorcism on Théoden which was working. Through Théoden, Saruman told him he will kill Théoden and Rohan will soon belong to him but Gandalf broke the spell which injured Saruman. Free from the spell, Éowyn goes to him and Théoden returns to his normal self. He thanks Gandalf and grasps his sword and sternly stares at Wormtongue. Théoden threw Wormtongue out of the palace and attempted to slay him but was stopped by Aragorn. He was asked where Théodred was and a funeral was held for his son.

After the funeral, Théoden and Gandalf stay by Théodred's grave and Théoden weeps as he feels responsible for his death. Gandalf assures him that Théoden was not responsible and that his son will go to the great beyond and join their ancestors. As refugees arrive in Edoras, they tell him of Saruman's destruction to which Gandalf tells him to rebel and fight. Aragorn suggests bringing Éomer back but Théoden believed that it was too late to bring Éomer and decided to empty Edoras and bring all refugees and soldiers to Helm's Deep. Gandalf told Aragorn and the others to aid Théoden if war should come and he rides off to find Éomer. As they were traveling, Théoden tells Aragorn about Éowyn; about how she lost her parents and that he should've been closer to her. Before arriving at Helm's Deep, they were intercepted by Saruman's warg riders. Théoden led a cavalry charge and dispatched Éowyn to lead the refugees to Helm's Deep. Théoden was victorious but lost many men, including Aragorn, who could not be found. He tells his men to leave the dead which upsets Legolas.

Aragorn survived and arrived at Helms Deep days later to warn Théoden that Saruman had unleashed 10,000 Uruk-Hai and will be arriving by nightfall. Théoden allows them to come and starts defending the fortress. Gimli tells him that the Uruks are more powerful and smarter than regular orcs but refuses to listen. Aragorn demands him to call for aid but Théoden assures him the old alliances are dead and that elves and dwarves would never help and neither would Gondor whom Théoden has asked for help but Denethor had not responded. Before the battle, Théoden begins to lose hope, but his comrade Gamling reminds him of being a king.

Soon after, hundreds of Elves, led by Haldir and sent by Elrond arrive to aid Théoden in the battle. Aragorn, Legolas, and Gimli lead the Elves on the wall while Théoden views the battle from above. After hundreds of Uruks are cut down, Théoden assures that he'll win but then, the Uruks breach the wall and the main gate. Théoden leads his men to the gate and holds off the Uruks but one injures him. Aragorn and Gimli fight off the Uruks on the causeway while Théoden tries to barricade the door again. This fails and he calls a retreat. The next morning, Théoden, Aragorn, Legolas, Gimli, and a few Rohirrim are the only survivors and barricade themselves in the throne room. There, Théoden loses hope but Aragorn remembers Gandalf's return and tells Théoden to ride out and meet them. Théoden gladly accepts and leads a last stand cavalry charge. They trample countless Uruks to reach outside and Gandalf arrives with Éomer and reinforcements and wins the battle. Théoden then travels with the Fellowship to Isengard to confront Saruman.

The Return of the King (film)

Théoden arrives at Isengard and demands Saruman to surrender. Saruman sarcastically asks for peace but Théoden says he'll give it to him when he is dead. Wormtongue appeared behind Saruman and Théoden tells him that he forgives him and to remember that he is a man of Rohan. Saruman tells Théoden that Wormtongue is his property and that victory at Helm's Deep does not belong to him and that he is Rohan's worst king. Théoden believes that he was right. Wormtongue then stabs Saruman and the wizard falls to his death. The Fellowship return to Edoras and Théoden holds a victory banquet. He gives a moment of silence for the lives of those lost and tells Éowyn that Aragorn is the true victor of Helm's Deep. The next morning, Gandalf tells Théoden that Sauron will be launching an assault on Minas Tirith and that Gondor will need Rohan's help. Théoden refuses as he does not wish to help those who did not help him.

Many days later, Gandalf secretly lights the beacon of Gondor and when Rohan receives the signal, Aragorn begs Théoden to aid Gondor and he agrees. Théoden dispatches Éomer and Gamling to summon every man they can find and to rendezvous at Dunharrow. Merry offers his service to Théoden and he gladly accepts it and he appoints him as esquire. Before riding out, Théoden believes that Gondor is where his fate will await him. When they arrive at Dunharrow, his men welcome him and learn that he has 6,000 riders to lead. Elrond arrives as well to give Aragorn the sword of Isildur and Aragorn and the others ride off into the night on a mission. Théoden's men believe that they are fleeing but Théoden assures them that they are not and will meet them on the battlefield. Théoden tells Merry that he cannot go to war with him but Merry sneaks in with Éowyn, disguised as a soldier and Theoden leads on to Gondor.

Three days later, the Rohirrim arrive at Pelennor Fields. Théoden gives a powerful speech and tells his men to fight to the death. He leads the charge (one of the greatest charges in cinema history), and they trample thousands of orcs who flee in terror. Théoden was close to victory but then, in the distance, the Haradrim arrive, atop their Mûmakil, giant elephants. Théoden reforms the line and leads another charge but an unsuccessful one as the Mûmakil trample the Rohirrim and crush thousands of them. Théoden becomes cornered by several orcs and Éowyn, still disguised jumps in to help her uncle. Then, the Witch-king of Angmar swoops down on his fell beast and grabs Théoden and his horse and hurls afar.

Théoden becomes crushed by his horse and is broken in several places. The fell beast gets ready to feast on him, but Éowyn steps in and decapitates the beast, and engages in battle with the Witch-king. Both she and Merry slay the king, and Aragorn arrives with an army of ghosts and they win the battle. Injured, Éowyn crawls over to Théoden to save him. Théoden tells her that she already saved him from a terrible fate but she cannot save him from death. He makes peace with himself, accepting that he was a great king and that his spirit will be welcomed by kings of old and dies. Éowyn weeps over his body.

In the film, that is the last of Théoden, the audience sees and hears of. In the books, after Sauron was defeated, a funeral was held for Théoden at Edoras, and Éomer is declared king. 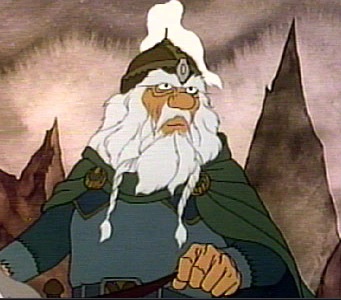 Théoden: Rankin/Bass Return of the King 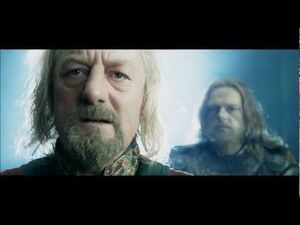 LOTR The Two Towers - "Where is the Horse and the Rider?" 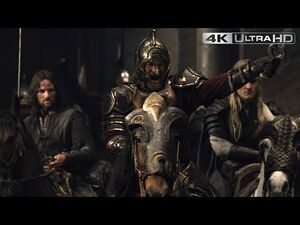 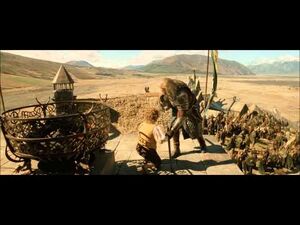 LOTR The Return of the King - Extended Edition - Théoden's Decision 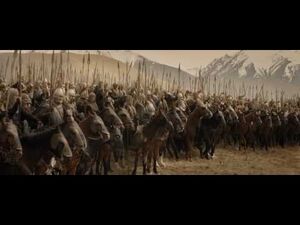 Ride of the Rohirrim 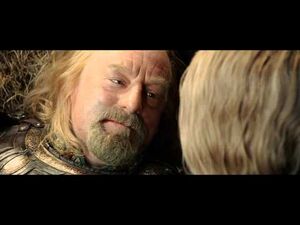 LOTR The Return of the King - The Passing of Théoden 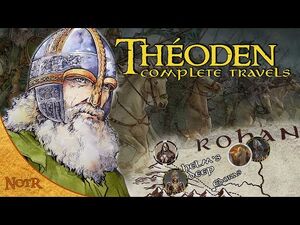 The Complete Travels of Théoden, King of Rohan - Tolkien Explained